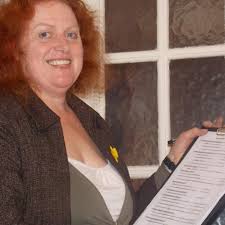 The candidate for an extreme Welsh nationalist party in one part of Wales has officially endorsed the Brexit Party (BP) nomination in another and the controversy has been highlighted on social media, The Eye can exclusively reveal.

The former Carmarthenshire councillor Sian Caiach is the Gwlad, Gwlad GG (Land, Land) candidate for Cardiff Central in next month’s General Election, yet is also the proposer for the BP nomination in Llanelli and the spotlight has been thrown on to the remarkable situation after comments on Twitter.

Yet Ms Caiach is no stranger to alarming news.

When the retirement was announced of her one-time council’s controversial former Chief Executive Mark James, she said: “(He is) rather arrogant and a control freak and vicious…”.

Her party (GG not BP) has also hit the headlines.

The one-time Chair of GG (which was formerly known as Ein Gwlad, EG, {Our Land}) has been faced with major problems running a charity allotment scheme and failed to file accounts two years running, and the party was created by the supporter of a paramilitary organisation which had links to the IRA.

Gwilym ab Ioan (known as Gwilym the Gardener) chaired EG and the party became GG, as it cleaned up its image to adopt a “more consensual approach”.

But it was originally founded by a retired heating engineer, who supports the 1960s paramilitary group Free Wales Army (FWA).

Those same documents make clear that Mr Jones was also in charge of the website of the old EG.

The acerbic right wing blog written by Mr Jones is called Jac o’ the North, and proclaims it is: “Interpreting Wales from a Right of Centre Nationalist perspective”.

He has published on his blog a picture of Cayo Evans, pointing a hand gun at the camera, and he revels in his long-standing support for the FWA.

Stephen Morris was ‘General Party Spokesman’ and ‘Policy Researcher’ of Ms Caiach’s party EG/GG, although as he lived in England he was barred from voting in Welsh elections, so is unable to vote for the party at these ballots.

Following our revelations about Mr Jones’ connection with Evans and news on The Eye of his publication of him with a pistol, a hotel where he was to announce the formation of the group Ms Caiach eventually joined, EG/GG, was clearly unhappy.

Before this a ‘public’ meeting was held in Autumn 2017 and we disclosed how Mr Jones had initially pledged to create the new party by early last year, with an Annual General Meeting (AGM) penciled in for March 3 2018, but nothing happened.

EG/GG was finally unveiled at Llanelli (where Ms Caiach proposed the BP candidate) later last year, but another nationalist blog had ‘reported’ earlier that a first ‘conference’ was to be held before the end of 2018.