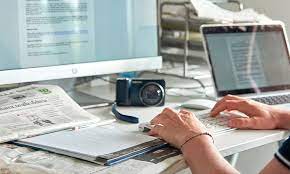 Officials at the BBC have failed to provide a statement explaining their policy of continuing to use as a television presenter former Welsh international rugby star Gareth Thomas, despite him being at the centre of a legal storm over allegedly deceiving his one-time partner by not telling him he was HIV positive.

Mr Thomas has said in papers lodged with the High Court, that he did not give his ex-partner this information because he “…was never asked…”.

But the astonishing silence about it from the BBC has shocked our Editor Phil Parry (who himself spent 23 years of his 39 year journalistic career at the corporation), and comes even though executives were given on Sunday afternoon a deadline of close of play yesterday.

What follows is the email exchange with the BBC Press Office.

“Could you please provide a statement on the continued use of former international rugby player Gareth Thomas who has admitted not telling his partner that he had HIV.

“This has been widely publicised, and is in today’s edition of The Sunday Times. He appears on the BBC Wales programme ‘Six Nations Sin Bin’. Phil Parry – The Eye.  https://the-eye.wales/

“From BBC Press office: Hi Phil. I have forwarded this to our Welsh press office. When is your deadline? Are you able to wait until tomorrow?

“From The Eye:  Tomorrow (Monday) is fine. Deadline is close of play Tuesday.

This final email from the BBC Press Office was sent at 3.59 pm on Sunday: “Thanks. I’ve shared your deadline with our team in Wales.”

Soon after our initial inquiry, a report on the remarkable situation was posted on the BBC website, but nowhere in it was mention made of the fact that Mr Thomas actually works for the corporation.

It began simply: “Former Wales rugby star Gareth Thomas has admitted he did not tell his ex-partner he had HIV, but said he was never asked, according to High Court legal papers”.

There was no reference either to Mr Thomas’s employment by BBC Cymru Wales (BBC CW), on its flagship television news programme BBC Wales Today (WT).

But this is set against a worrying backdrop, as in the papers submitted to the High Court last week, he acknowledged that he was wrong to believe that he could not transmit the condition while the AIDs virus was at a low level in his system, but denied causing personal injury.

Mr Thomas’s former partner Ian Baum, accuses him of hiding his HIV status when the pair were a couple, and “failing to take reasonable care”  to ensure that he did not pass it on.

However the court documents make clear that: “…it is denied that the defendant deliberately concealed his positive status; he was never asked by the claimant if he was HIV positive and he never denied that he was”.

They emphasise, too, that Mr Thomas: “genuinely and reasonably believed that he could not transmit the condition to others whilst his CD4 (white blood cell) count was not at a dangerous level requiring medication”.

Yet it appears the stance by Mr Thomas has not been universally welcomed.

The former Welsh rugby international, Lee Jarvis, included the BBC report, and tweeted: “Regardless if you are Asked or NOT surely that sort of information has to be shared with your partner (confused emoji)“. 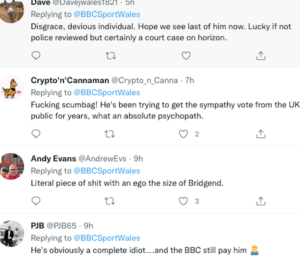 Other critics used social media to weigh in as well. One said about Mr Thomas in the comments section of the BBC CW report which was tweeted out: “Disgrace, devious individual. Hope we see last of him now. Lucky if not police reviewed but certainly a court case on the horizon”.

Another remark in reply to BBC CW was: “Fucking scumbag! He’s been trying to get the sympathy vote from the UK public for years, what an absolute psychopath”. 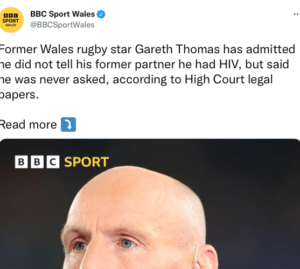 A further announcement was that Mr Thomas was a: “Literal piece of shit with an ego the size of Bridgend”.

A fellow detractor also seemed angry at Mr Thomas, as well as his role at BBC CW, saying: “He’s obviously a complete idiot… .and the BBC still pay him”.

These observations come as Phil has already made plain his frustration at some Press Officers.

Mr Thomas, meanwhile, has lashed out at the media, without, apparently, addressing the issue of whether or not he told his ex-partner about being HIV positive.

He said yesterday on Twitter: “After being blackmailed for £250,000 and a media witch hunt to expose my HIV status, three years ago I was forced to tell the world that I was living with HIV. Now for those very same reasons I am forced to come forward again today”.

The star came out as gay in 2009, near the end of a rugby career that included 100 caps for Wales, and captaining the British and Irish Lions. As his tweet has emphasised, 10 years later he said publicly that he was HIV positive.

But perhaps ‘coming forward’ about this case is not something the BBC wish to do, if they have given no official explanation about continuing to use the star at the centre of it all, even though he has been hit by a legal storm over allegedly deceiving his former partner by not telling him he was HIV positive, and their ‘Press Office’ was given a deadline of yesterday to make a statement.

The memories of Phil’s, extraordinary award-winning career in journalism (including some of the immediate responses from Press Officers) as he was gripped by the rare neurological disabling condition, Hereditary Spastic Paraplegia (HSP), have been released in a major book ‘A GOOD STORY’. Order the book now!