Home News War of the worlds 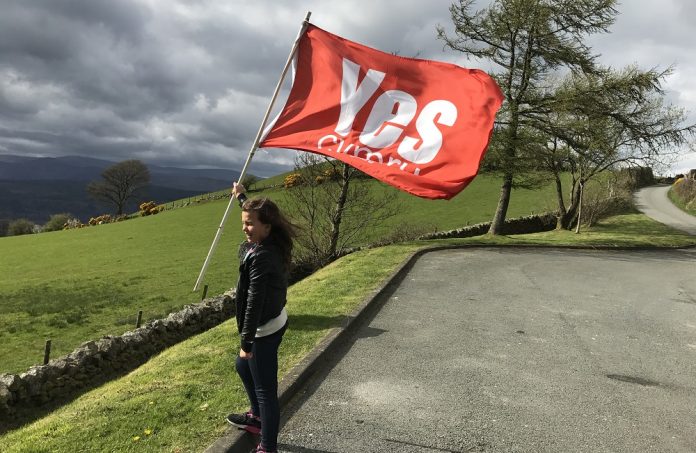 The leader of a controversial Welsh independence group that claims to “believe in an inclusive citizenship”, has publicly declared he wishes Germany had won World War One, ironically proclaimed “Stalin had no choice”, and questioned the fight against Hitler, it has emerged.

In another remark on Twitter, Yes Cymru’s (YC’s) Sion Jobbins queried the Kindertransport which helped 10,000 children escape the Nazis and said: “… it wasn’t some amazing act of humanity”. 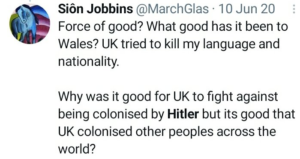 A further message was: “Why was it good for UK to fight against being colonised by Hitler..?”.

The alarming news about Mr Jobbins’ comments comes hard on the heels of other disturbing controversies to engulf his Welsh independence organisation. 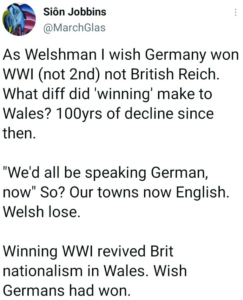 The headline-grabbing YC member Kerry-Anne Mendoza (who has been described as a “rock star” by officials) shared a tweet by a Labour front-bencher, accusing her of being a “Scab”.

She ‘retweeted’ another from a scandal-hit former MP which stated:  “The truth is Zionism is a racist, warmongering, supremacist ideology”, and prompted the Wales Against Anti-Semitism (WAAS) movement to say online: “Why is @YesCymru’s Kerry Ann Mendoza retweeting Chris Williamson’s glorification of a convicted terrorist?”.

Arbeit Macht Frei was the message emblazoned above the gates of Auschwitz.

But a full six months later Mr Jobbins said:  “We will be discussing the matter (her alleged anti-Semitism generally) as a committee in conjunction with our new diversity and inclusion lead officer who will be starting work for us on Monday (February 15)“.

Despite this ‘discussion’ about Ms Mendoza the message from Mr Williamson which she ‘retweeted’ came the day afterwards, and the outrage of WAAS was four days later.

Ms Mendoza joined YC in the Autumn, shortly after moving to Wales from her home city of Bristol, and her account tweeted news of her membership to its 59,000 followers. 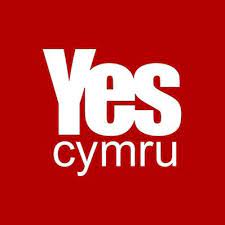 Former Cardiff Council leader, the Liberal Democrats’ Welsh Parliament/Senedd Cymru (WP/SC) candidate for Cardiff Central Rodney Berman said of her joining YC:  “The decision to admit and then publicly welcome this individual raises serious questions regarding the priorities and values of YesCymru. Quite frankly, it’s appalling”.

She was suspended briefly from Twitter following complaints about another post in which she compared those attending the Jewish Labour Movement’s conference to “white supremacists”.

Ms Mendoza accused as well (Jewish) writer and columnist Jonathan Freedland of “manufacturing” the 2019 General Election result, and in January 2020 she claimed celebrations over the completion of Brexit could turn into a  “21st century Kristallnacht”.

Ms Mendoza has appeared, too, more than once on the state-backed television station, Russia Today (RT) which is accused of being a mouthpiece of the autocratic Russian leader Vladimir Putin, and has played host to the conspiracy theorist in Wales, Anna Brees.

Meanwhile, the organisation she joined (Mr Jobbins’ YC) declared in a tweet which has now been deleted that “Open assaults on Welsh democracy have led to (its) remarkable growth”, linking the comment to an article in the Herald.Wales by the MP for Carmarthen East and Dinefwr, Jonathan Edwards, who accepted a police caution after attacking his wife.

But critics were unamused. 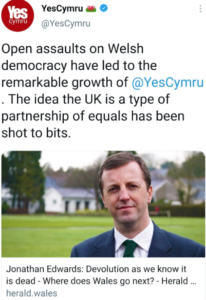 One stated online:  “It’s infuriating. Yes Cymru are doing so much very well, then they just undermine all the good stuff with unnecessary stupidity/lack of sensitivity. They have the money to hire people now to do a better job”.

Another announced: “I’ve got very mixed feelings about the MP in question but the timing of YC is absolutely mad. Are they thick? Why do they keep making mistakes like these? They need to start having people who know what they’re doing.”

A further comment was: “In (sic) going to say it AGAIN because it is DOING MY HEAD IN, why does Jonathan Edwards, who admitted he was GUILTY OF ASSAULTING HIS WIFE, still have influence in Plaid Cymru and @YesCymru? And why has the latter PLATFORMED HIM TODAY AFTER THE WEEK WE HAVE ALL JUST HAD?”

Welsh nationalist party Plaid Cymru (PC) suspended Mr Edwards for a year in July following the attack, meaning he must sit as an independent MP until at least 2021, and a disciplinary panel ruled that any lifting of the suspension depended upon the MP demonstrating “he has undertaken a period of self-reflection and learning to address his actions”.

Even so, PC has been accused of continuing a “close relationship” with him, after it emerged that he had campaigned with PC councillors and used the same adviser as the party leader, following the suspension.

Rob James, leader of Carmarthenshire County Council’s (CCC) Labourgroup, raised “serious doubts” about the nature of the suspension, saying that it was just a “PR stunt”.

Yet this is not the first time YC has hit the headlines, and perhaps recently releasing a sexist video in support of its cause (which was again deleted) is one of the ‘mistakes’ being referred to in the online complaint.

In January the organisation released the video promoting Welsh independence which featured a pair of cartoon women’s legs in stockings, and one critic on social media said: “fire the pig that designed it”. It displayed the cartoon of a woman wearing stockings and red arms, with a map of Wales for her body and screaming “YEEEEEEEEEEES”in the caption below.

But it was slammed on Twitter, with one critic saying:  “I find it astonishing – and cowardly – that @YesCymru have merely deleted that sexist, appalling video from last night and not acknowledged the disgust felt by their membership and apologised for the offence caused, not to mention the damage sustained to the campaign”.

Another said in reply to YC: “Never mind the booklet, burn that fucking sexist animation and fire the pig that designed it”. 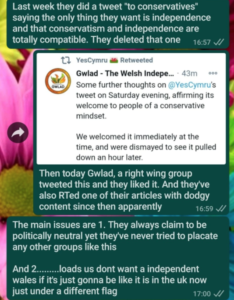 The controversy also came hard on the heels of it being divulged on The Eye that splits were emerging in YC, with an angry supporter tweeting that he had cancelled his membership, while another showed his fury after claiming the group had ‘liked’ a tweet from a right wing party, which it had also re-tweeted.

The organisation has, though, long been contoversial, and appears to be offering highly questionable information.

YC has claimed that opinion polls report support for Welsh independence among younger people is “around 40-50 %” saying: “Independence is becoming common sense view within young people in Wales.”.

The truth is that recent opinion polls suggest the figure among younger people is far lower than this, and also make clear that the vast majority of people in Wales support Welsh parties which are opposed to independence.

Perhaps it is also questionable for the leader of a Welsh independence group that claims it believes in “an inclusive citizenship”, to declare publicly that he wishes Germany had won World War One, ironically proclaim that “Stalin had no choice”, and question the fight against Hitler…

Tomorrow – how the departure of the head of one of Wales’ most important news websites, shines the spotlight on him threatening to sue our Editor Phil Parry; but will his successor be any better?

The memories of Phil’s decades-long award-winning career in journalism (when proper investigations followed his disclosures) as he was gripped by the rare disabling condition Hereditary Spastic Paraplegia (HSP), have been released in a major book ‘A GOOD STORY’. Order the book now!