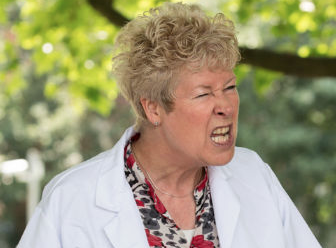 Edwin Phillips listens as the irrepressible Pro Vice-Chancellor of scandal-hit Swansea University, Hilary Lappin-Scott (HL-S), tells a colleague (C), about not being selected for an interview to become Vice-Chancellor after the recent high-profile suspension of the man in charge, and the shock withdrawal of his potential replacement. The disturbing news of Alison Jones’ pulling-out rocked the university during a dirty tricks campaign which appeared to back HL-S and was revealed exclusively by The Eye, after she had enraged staff with tweets from around the world, at her institution where a convicted fraudster exposed by us was employed on a contract, and which hit the headlines over previous people at the top of its contentious management school.

HL-S: (Appearing to bounce) isn’t it the most wonderful of mornings?

C: (Bored) why? I had heard that your plans to get a cheap day-return ticket to Reading did not materialise. Difficult though it is to believe, I understand that the powers-that-be at the University of Reading did not even short list your application for the position of Vice-Chancellor (VC), as well as the one with us!

(Mischievously) we were so looking forward to your departure from Swansea. So what happens now? Are we stuck with you?

HL-S: (Suddenly sounding important) I do not like your tone. Remember that I am still an esteemed Senior Pro Vice-Chancellor (PVC) and I have received the honour of Officer of the Order of the British Empire (OBE).

C: (Sighing) given the number of times you hawk the title around, it is difficult to forget. So why are you so happy when we are so disappointed?

HL-S: After that absurd University of Reading business, (coughing) (plainly they didn’t know who I was) I was super-excited by the appointment of Alison Jones as VC here at Swansea University – even if I did again fail to make the short list. Alison’s appointment was the next best thing. As sisters, we are automatically on first name terms even if I have yet to meet her. But don’t think I have forgotten about this appalling snub at Swansea, I know those who orchestrated it and I have a long memory.

I am looking forward to working alongside my sister, who I understand is also female, from the University of Wollongong. We sisters have to stick together. The dream team of Professor Jones and Professor Lappin-Scott, OBE (strict alphabretical order) just sounds so right as a meeting of equals in a female coalition. We know from history how well coalitions work out. And just think of the international travel I will enjoy on the back of her appointment. Wollongong has to be my first stop just to check out the academic credibility of the place and to promote my campaign for women in STEM (Science, Technology, Engineering and Mathematics).

C: (Starting to grin) have you not heard? I understand that Professor Jones withdrew. (Grinning broadly now) perhaps it was because she couldn’t stand the prospect of having to work with you. It seems a shame. Apparently she is an eminent toxicologist and therefore was ideally suited to addressing the terribly toxic situation here at Swansea University.

HL-S: (Not noticing insult) great! This clearly leaves the door open for me. It is only a matter of time before the Council of Swansea University (and especially my nominees and buddies) recognise the fact that a global academic superstar is in their midst and crown me as VC.

C: (Staring at ceiling) I, and all my co-workers, feel nauseous at the prospect. So tell me, have you done anything of any use in the last couple of months?

HL-S: (Appearing to bounce again) well, as you know, I am now also Head of the School of Management. Everybody (i.e. all the females) in the school think I am marvellous. I have made my presence felt in all sorts of different ways but I am most proud of the fact that the school is no longer a meritocracy. Ability and knowledge no longer count for anything. It is now a ‘feminocracy’. I am delighted to say that the last six promotions in the school were all females. Some could read as well as write so that satisfied the academic criteria for promotion and I am sure that they could all read better than the males. Ideally the school should comprise an academic faculty of latter day Amazons. Of course, we do want some males to have a presence in the school, perhaps serving coffee and teas, and delivering the post. Males delivering mail … get my little joke?

Being the caring person that I am, I will be trying to get loans for those males seeking internal promotion and gender assignment surgery. Post-operation, their increased salary will be able to help repay the loans – so it’s a win-win situation.

But my humanity is not restricted to Swansea University. I was walking to work the other morning and there was a person of the male persuasion picking up litter from the beach. Oh no, I did not just walk past. I patted him on the head (notice I did not say ‘his head’) and said “well done, my good person” before walking on. His reward was that I tweeted my encounter to my global followers.

I am sure that he/it was ‘made-up’, as we say on the street.

C:  (Sighing) and what other nonsense have you busied yourself with in the wider university?

HL-S: (Excitedly again and not noticing irony) have I mentioned that I am very big on the advancement of women, inclusivity, diversity and on LGTQB or is it LQBGT, or whatever it is. You know what I mean

C: So what have you actually done?

If this is not evidence of innovation and entrepreneurial spirit, I do not know what is.

Next time we meet, you will probably have to address me as ‘VC’

C: (Mischievously once more) are you sure, in your case, that VC stands for ‘Vice-Chancellor’ and not ‘Valueless Colleague’?!

Also on The Eye – Edwin Phillips reads a Press Release from scandal-hit Swansea University to the mainstream media, congratulating them for their lack of coverage of a dirty tricks campaign underway during the crisis.

Our Editor Phil Parry’s memories of his 35-year award-winning career in journalism as he was gripped by the incurable disabling condition Hereditary Spastic Paraplegia (HSP), will soon be released in a major new book ‘A Good Story’. Pre-order the book now!

Tomorrow on The Eye – disturbing revelations about another senior figure at controversial Swansea University.

Check your knowledge of important events as revealed on The Eye, with our brilliant interactive quiz: