Home Journalism All the news that’s fit not to print… 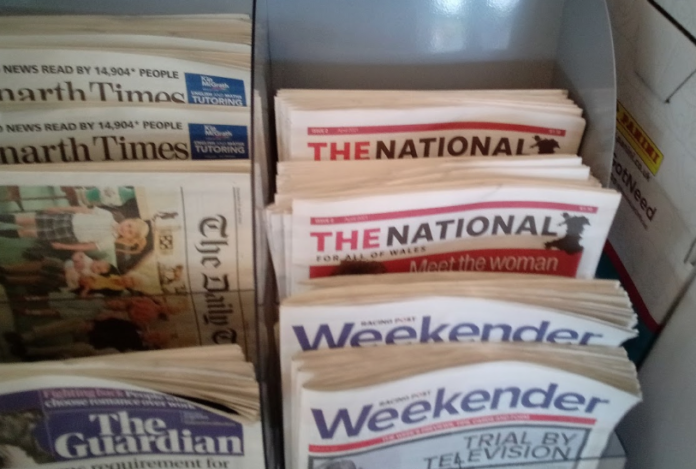 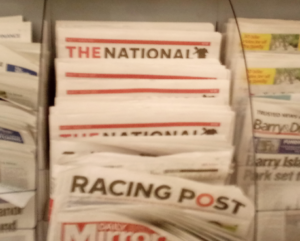 Racks of a ‘national’ Welsh newspaper lying unsold in supermarkets days after it was released, and readers complaining of problems in buying a copy, highlight the enormous difficulties facing new publications, amid growing concern about it urging readers to give help with hiring another journalist, The Eye can reveal.

One said about The National (TN): “This is a complete nonsense.  We all know how difficult it is starting a new newspaper, but asking for money from your readers to hire a reporter? I ask you!”.

Another told us: “I give it six months.  It’s like the Daily News or Today (two defunct newspapers) all over again”.

Several unsold editions of TN have now been found at different supermarkets around South Wales, and the disturbing discovery came long after it was published.

A journalist on The Eye also contacted several newsagents’ shops in North Wales earlier this week to ask whether TN was stocked.

The answer was always the same – the product was being pushed, but there was little interest and the newsagents had few copies, although there were many returns.

The cost of the newspaper had also been cut (a possible sign of problems) and the front page ‘splash’ about a “BUSINESS’ TAX BOOST” has been described to us as “incredibly dreary”. 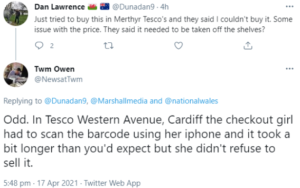 One reader told The Eye: “The price has been reduced from £1.10 to £1. The front page looks deadly dull and isn’t remotely eye-catching”.

There also appears to be an issue with actually buying TN in certain outlets around Wales.

One reader has said on Twitter it had to be taken off the shelves at Tesco in Merthyr Tydfil, while another in Cardiff declared:  “Odd. In Tesco Western Avenue, Cardiff the checkout girl had to scan the barcode using her iphone…”.

The facts that there are scenes of unsold copies of TN at shops around Wales, and difficulties with pricing have been publicised on social media, could prove embarrassing for those in charge. 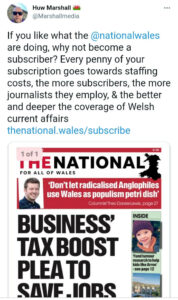 The man behind TN, controversial ‘comedian’ Huw Marshall, has a number of times urged people to become subscribers, and on the latest occasion he has proclaimed on Twitter: “Every penny of your subscription goes towards staffing costs…”

These alarming details underline the apparent crisis in recruitment, which was perhaps alluded to by Mr Marshall.

His newspaper has baldly announced in a headline:  “Help us reach 1,000 subscribers and we’ll hire a political correspondent”.

Yet even this paltry figure seemed ambitious, as it has been revealed TN had a far lower number days before.

The ‘editorial leader’ as he has been described, Gavin Thompson (who also edits The Argus in Newport) said: “Our journalism is funded by our digital subscribers. At time of writing, 430 of you had signed up to become subscribers, many taking out an annual subscription”.

Just before the launch of TN it advertised for “Digital reporters (x2), audience and content editor (x1)”, but there were severe doubts about whether a ‘national’ news service could be undertaken with this number.

Comments on Twitter from Mr Marshall, emphasise these difficulties in getting staff at the new Welsh newspaper, which was published both online and in a printed version.

Even set against this bizarre background, there has been mounting concern.

The long-term future for TN does not look good, and headlines from the past are likely to continue to dog it in the weeks and months to come.

A reader of the paper’s first edition (on St David’s Day) said:  “It looks like the Wrexham Leader from the 1970s”, and those in authority took a pretty dim view as well.

Indeed the reviews generally for TN have not been positive, and the neutrality of its output has been questioned, when this is an important tenet of news journalism.

This was the published comment by one writer online: “It (TN) starts with worthy statements about how we deserve better fearless, independent and unintimidated media in Wales and should be happy to pay for it then gives us a timid, third rate product filled mainly with political comment from compromised sources who wouldn’t know a truth if it whacked them over the head with a cricket bat.

There are also major questions about the man who first had the idea for TN, Mr Marshall, who has been described online as the “driving force” for it by the organisation it has ‘partnered’ with (The Newsquest Media Group [NMG] which is part of the giant American media corporation Gannett inc.), and who was, too, the figure behind New Media Wales (NMW).

The Eye have shown how Mr Marshall had made sick ‘jokes’ about a murdering gunman, used bad language to abuse prominent politicians as well as our Editor Phil Parry online, was placed under police investigation and been reprimanded by a social media company.

He is also thought to be responsible for such ‘pranks’ as having unwanted takeaways delivered to critics’ homes.

The background to Mr Marshall, though, is even more worrying than just sending takeaways to people’s houses.

Two people died and a police officer lost the sight in both eyes when rampaging gunman Raoul Moat shot them, yet despite this on July 8, 2010 – with him trying to escape from armed police – he published a message on his Facebook (FB) site, reading: “Hi I’m a sexy 19 year old blond (sic) from the North East of England looking for some fun.

Even in the last few months, Mr Marshall has been dubbed a “chancer” on social media, and his ‘stories’ have been accused of being “cut and pasted” from other publications by the UK satirical and investigative magazine Private Eye.

Evidently he does not know his journalist libel law (which is strange for someone involved in a new media service), because Mr Marshall has said on Twitter that Mr Parry is a ‘liar’ and an “obsessive coward”, linking the insults to an earlier piece he had written about the ‘venture’.

Yet publishing these phrases to a third person (as he has done) is highly libellous –  but Mr Parry’s libel lawyer knows the rules.

Mr Marshall has also called Mr Parry a “self proclaimed journalist”, which may not be libellous but is provably wrong as he trained to be a journalist in 1983 on the best newspaper course in the UK before moving into television, and has won an enormous number of awards.

His long career has mostly been in other organisations (including 23 years with The BBC), and he has taken a large number of National Council for the Training of Journalists (NCTJ) exams – ones in libel among them.

After Mr Parry published an earlier factual story about his antics, Mr Marshall said on Twitter, it was “now in the hands of the police” when the facts (unlike Mr Marshall himself) were NOT, actually, a police matter.

Mr Parry seems to have become something of a thorn in the side of Mr Marshall, because he has declared that he has a number of different Twitter accounts, but says he reserves one for items which may bother him, stating: “@marshallmedia is where I post Everton related stuff and things that upsets Phil Parry”.

Yet it has not only been Mr Parry to have irritated Mr Marshall in the past.

One insult eight years ago, was directed at the Labour MS and minister Ken Skates, with another hurled at the former Liberal Democrat AM Peter Black. After Mr Skates tweeted in celebration of a one-vote council by-election victory over Plaid Cymru (PC) in Ruabon, Mr Marshall referred to him in his own tweet as a “gloating t**t”, and he described Mr Black as a “humourless (sic) t..t”as well as a “dull, tedious t..t”.

In 1992 he was PC’s Parliamentary candidate in Cardiff Central, coming fourth with just 748 votes, however his plans to stand for election as a councillor were scuppered when it emerged that he had posted the so-called ‘jokes’ about Moat , and published the abusive remarks to senior politicians on social media.

But the problems facing TN are no joke – and this ‘comedian’ behind it who made sick ‘jokes’ about a murdering gunman, as well as foully abusing senior politicians, will be very familiar with them.

Especially if racks of his ‘national’ Welsh newspaper lie unsold in supermarkets days after it was published, and readers complain about difficulties in buying a copy.

It seems these difficulties could highlight the enormous problems facing new publications, amid growing concerns about TN urging readers to give help with hiring another journalist…

Tomorrow, our satirical writer Edwin Phillips takes a look as only he knows how, at this extraordinary situation.

The memories of Phil’s astonishing decades long award-winning career in journalism (before the advent of TN or NMW) as he was gripped by the rare disabling condition Hereditary Spastic Paraplegia (HSP), have been released in a major book ‘A GOOD STORY’. Order the book now!