Home News Defence of the realm 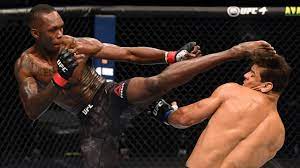 An extraordinary civil war over transgenderism which is ripping apart the Welsh nationalist community has burst into the open, with a controversial ‘comedian’ who is behind the newest ‘national’ newspaper in Wales, being urged to defend a key employee, it has emerged.

It comes as a Welsh football supporters’ band which backs the nationalist party Plaid Cymru (PC), and said “lying cunt” on social media, has also been banned by a television company from singing song lyrics for ‘political reasons’.

Apart from saying the politician, Nigel Farage, was a “lying cunt”, the band, The Barry Horns (TBH), featured, too, a picture of Cayo Evans (leader of 1960s paramilitary organisation Free Wales Army), as its masthead on social media, showed a photograph of a burning match (a probable reference to the campaign in which holiday homes were set alight), and had some account features “temporarily limited” by a social media giant, for behaviour which “may violate Twitter rules”.

Meanwhile the contentious ‘comedian’ Huw Marshall, who created nationalist Welsh newspaper The National (TN), has been told on social media to stand up for the paper’s cartoonist ‘Mumph’, who has come under attack during the astonishing civil war.

This celebrated animator has been branded on Twitter “homo/transphobic” by another leading light in his group attacking the other – Aled Gwyn Williams.

One outraged onlooker posted on Twitter: “@Marshallmedia Are you going to defend your cartoonist or are you going to continue supporting the people who are hell bent on destroying (Welsh independence organisation) YesCymru?”.

But as this remarkable row unfolds, it has been the separate, alarming behaviour of nationalist brass band TBH, which has caused even greater concern.

Mr Marshall, who is at the centre of the growing war, has endorsed TBH on Twitter, and included lyrics from them that the Welsh-language fourth channel S4C banned. 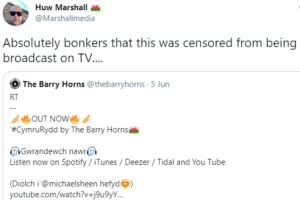 He said it was: “Absolutely bonkers that this was censored from being broadcast on TV….”.

This was ironic as Mr Marshall had been a senior executive with the Welsh-language fourth channel, and has included details of his involvement as background for his various ‘ventures’.

The brass band which he supports, TBH, denied calling Mr Farage a “lying cunt” online even though The Eye have found the evidence. They proclaimed about Brexiteers on Twitter “fuck you”, and declared about then UK Health Secretary Jeremy Hunt, “Go fuck yourself you Tory bastard“, but were to have been used as ‘guests’ in a performance by BBC Radio Cymru (BBC RC) and the BBC National Orchestra of Wales (BBC NOW), which officials claimed was “Suitable for all ages”. 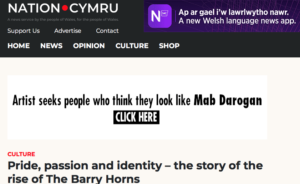 Despite this kind of language it seems TBH still have supporters within the nationalist community.

An adulatory piece about them was published a few days ago by the website Nation.Cymru (NC), describing their “Pride, passion and identity”.

In December of 2019 an angry sports journalist had outlined to the governing body of Welsh football, the Football Association of Wales (FAW), a series of problematic issues: “The Barry Horns have had their official Twitter account shut down for foul and abusive behaviour, and repeated violations of Twitter’s terms and conditions. They then set up another account, which was shut down within a week.

There has, though, still been no full response from the FAW to the raising of these concerns. 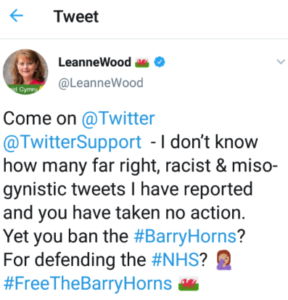 Apart from having some account features “temporarily limited”, as the email to the FAW makes clear, TBH were also briefly totally barred from Twitter following their offensive comments, and after the ban was lifted said that they were “beautiful”, yet serious questions have been raised about this contentious decision. The former leader of Plaid Cymru (PC) Leanne Wood spoke out against the restriction at the time, saying on Twitter:  “… you ban the Barry Horns? For defending the NHS?”, this was then re-tweeted by then PC (now independent) MP Jonathan Edwards.

An ex-football club director in Wales had earlier contacted the FAW, when Jonathan Ford was in charge, asking: “I would like to know what the FAW position is on the Barry Horns who having affiliated themselves to South Wales football now appear to have adopted an aggressive political agenda. Some of their language on Twitter is worse than I have ever endured on football terraces. Is this the sort of agenda the FAW condone?”, and action was demanded from the organisation. 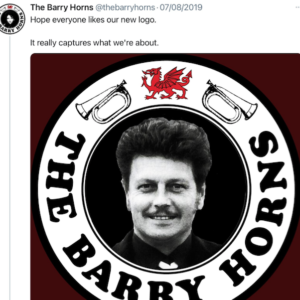 Meanwhile it is obvious that TBH (which used the picture of Mr Evans, who was convicted of conspiracy to cause explosions, for its Twitter title page) support Ms Wood’s (and Mr Edwards’ former) party because before the ban, they exhorted followers to “Join @Plaid Cymru”.

That month TBH also gave football fans from North Wales a surprise welcome to Cardiff with a performance at Cardiff Central Station ahead of Wales’ match against Austria at the Cardiff City Stadium. At the time they declared: “The Horns couldn’t wait to greet the train upon its arrival to Caerdydd. Next stop – 3 points!”. 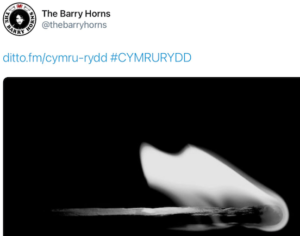 Yet it could be revelations now by The Eye, of the row about transgenderism in the nationalist community, which may receive even more attention.

Motions for the ‘Central Committee’ (CC) of Yes Cymru (YC), with one urging positions to be filled by people who “identify as female or non-binary”, put centre stage disclosures by our journalists that the group has already been engulfed by earlier controversies. 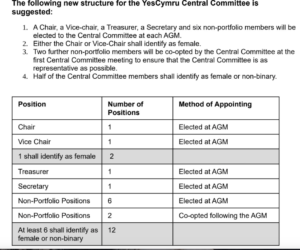 Another stated that: “…feeding into the new Central Committee should be an Equality and Diversity Sub-committee (EDC) which will..(drive)…the agenda forward for YesCymru”.

As this agenda was ‘driven forward’, we showed how a senior member who has recently been suspended from the CC, eminent clinical psychologist Dilys Davies, suffered enormous abuse online (with her having to ‘protect’ her Twitter account) after making remarks in the row. 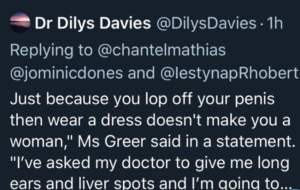 Dr Davies endured the attacks from certain supporters of Welsh independence within YC, after quoting the famous feminist Germaine Greer, who has said publicly that even following gender re-alighnment surgery, a person is not fully a woman, because puberty, periods, childbirth, and the menopause have not been experienced. It has been reported that Dr Davies is now under YC investigation for alleged transphobia and homophobia. She is a consultant psychologist who specialises in sleep difficulties, and recently bought the famous Cofiwch Dryweryn memorial wall on the A487 near Llanrhystud.

Analysis by The Eye of the major split in YC, reveals that Dr Davies and her supporters are on one side, while several others form the other – and this division has been underlined by the abusive comments she has suffered, with many people now blocked from seeing her social media messages. Her Twitter account says: “Only approved followers can see @DilysDavies’s Tweets”. In one camp in the civil war, is those who support the concept of Welsh independence as a left-of-centre project; while making up the opposition are those who believe the primary aim should be that Wales becomes an independent state, with the row now over transgenderism at the heart of current problems.

Among those in the opposing group to Dr Davies’, appear to be Mr Marshall, along with another senior CC member of YC (who also launched the Mumph attack online), Mr Williams. Mr Marshall proclaimed that he was responsible for “Digital development” at TN in the masthead of his Twitter page, but the newspaper he works for, (TN), is at the centre of a storm of controversy over its neutrality, and there have been attacks online about the nature of its financial backing. It has also been condemned by one reader as a “nationalist propaganda sheet”, while records at Companies House reveal that Mr Marshall is, too, director of a dormant company.

Meanwhile reports of the suspension of Dr Davies, have included details that Mr Marshall’s ally (although seemingly on opposite sides over the use of Mumph), Mr Williams, has been prevented from accessing land that she owns in Ceredigion which has replicas of the memorial wall on it.

It is clear that Mr Williams, like Mr Marshall, holds extremely trenchant views himself about Welsh independence. Speaking on the Welsh-language S4C debate programe Pawb a’i Farn last year, he said: “The new members we have, they’re not the nationalists you would expect. They don’t wave flags, they’re not members of (Welsh nationalist party) Plaid Cymru a lot of them. A lot of them are people who would feel more comfortable in the Labour Party”.

But ‘comfortable’ is not a word which can be used to describe events now in the Welsh nationalist community, after The Eye showed how a huge civil war over transgenderism was tearing it apart, and that a controversial ‘comedian’ behind the newest ‘national’ newspaper in Wales was being urged to defend a key employee.

The memories of our Editor Phil Parry’s extraordinary decades-long award-winning career in journalism, when enormous rows within organisations were examined, as he was gripped by the rare neurological condition Hereditary Spastic Paraplegia (HSP), have been released in a major book ‘A GOOD STORY’. Order the book now!