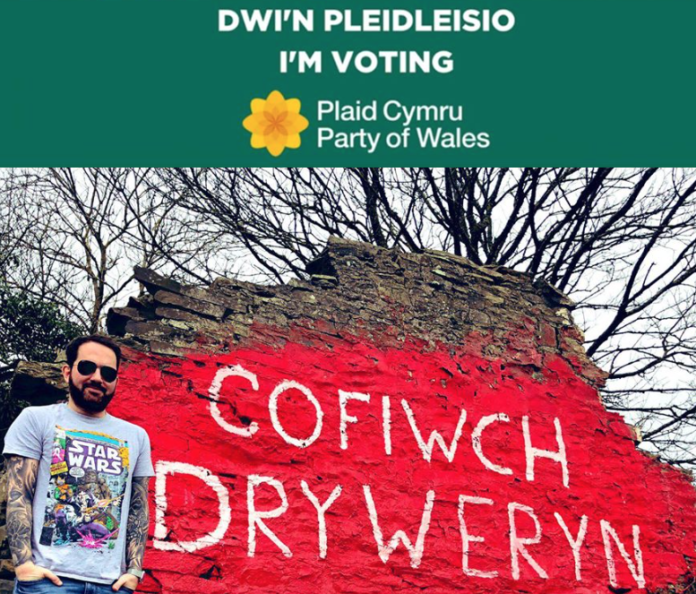 Rhydian Bowen Phillips has been engulfed in controversy after publicly accusing Tories of being “scum” on Twitter, endorsing a contentious Welsh independence group and saying money was being “wasted” by the UK Government.

Mr Phillips has ‘re-tweeted’ a WalesOnline (see story in two days) survey which claimed that most people “…would vote for Cymru to be independent if there was a referendum”, with a Welsh flag after the comment, that “2/3 believe Westminster has performed badly in serving the people of Cymru” and that “3/4 would remove the Monarchy as the Head of State”.

He fronts a BBC Radio Cymru (BBC RC) programme on Saturdays and has declared on social media in the past “I DESPISE the Tories”, stressed that Wales should stand up to Westminster, as well as in one message just saying six times “Wales is a different country to England. 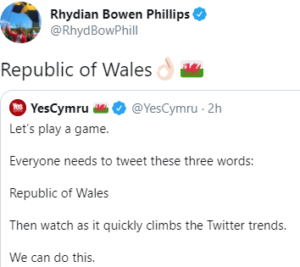 In one controversy he has tweeted: “I just can’t comprehend how so much money is being misdirected..” hashtagging ‘ToryScum’.

Mr Phillips has also put a ‘thumbs up’ and Welsh flag after his declaration on the social media site that there should be a  “Republic of Wales”.

Remarks like these, though, sit uncomfortably with the new guidelines announced by BBC Director General Tim Davie which tell presenters:  “…don’t express a personal opinion on matters of public policy, politics, or ‘controversial subjects’”.

Yet he is not alone.

A controversial nationalist website which is supported by the taxpayer marked the flouting of those same BBC rules by Mr Edwards, who reads the television news

The article included details of the new guidance masterminded by Mr Davie, and his crackdown has been widely trailed.

Tho rules he announced also state that staff should avoid using disclaimers such as ‘My views, not the BBC’s’ in their biographies and profiles, as they provide no defence against personal expressions of opinion.

Yet Mr Edwards’ own Twitter account declared: “Views my own” and a recent Tweet he published also appears to fly in the face of the new rules, stating:  “The wacky world where Wales was never a nation and Pembrokeshire is the heartland of… Plaid Cymru.  Help!” and he has placed a Welsh flag after the comment.

But the overall boss of both Mr Edwards and Mr Phillips, Mr Davie, has proclaimed that he would be prepared to sack presenters who make major breaches of impartiality guidelines on social media.

He has stated:  “I am prepared to take the appropriate disciplinary action, all the way to termination”.

Despite this, in apparent contravention of the ruling, Mr Phillips has also retweeted a comment that a Brexiteer was “A ruptured pustule on the anus of the country”, and has, too, tweeted a picture of himself flashing the ‘V’ sign at a poster of Margaret Thatcher.

He and Mr Edwards are not alone, though, in making their headline-grabbing views known, despite the corporation’s social media guidelines, and Wales has often held centre stage.

The BBC’s Welsh rugby commentator Jonathan Davies  who has been publicly condemned by television viewers for talking “some shit”, as well as being “so so thick”, and was filmed using a fire extinguisher in a dangerous prank, is an extensive user of Twitter.

On social media Mr Davies has recently sent a picture of himself with no clothes on to TV and radio star Carol Vorderman. He has faced huge criticism following statements which have included calling the Rhondda MP Chris Bryant a “knob” on Twitter, for asking about childcare during a House of Commons debate. The fury of Mr Davies has too been directed at journalist Marcus Stead on social media after he had criticised what he views as the Welsh establishment.

Mr Davies was accused of being ‘misleading’, publishing ‘rubbish’ and ‘ranting’, after stating on social media that controversial plans to re-develop a Cardiff cancer hospital would leave 60 per cent of a meadow available to walkers when campaigners say surveys have indicated all will be destroyed.

Contradicting him, one campaigner declared about the project to re-develop Velindre Hospital: “The whole area will be bulldozed, £27 million of public money just to access this unsuitable site…” Another cautioned:  “Let’s talk Jonathan, not rant.”

Mr Davies (one of whose Twitter accounts is @JiffyRugby and includes ‘OBE’ after his name) is President of Velindre Fundraising, and demanded of one of the campaigners:  “Have you or anyone close to you ever been unfortunate enough to have cancer?”  But the advocate for a green space in that part of the city hit back, and said:  “Absolutely yes, many of those opposing the site are current patients at Velindre”.

Warnings were also repeated about the hazards involved in the misuse of fire extinguishers after experts were shown shocking pictures from a video of Mr Davies using one to spray into the face of former international referee, Nigel Owens, as he sat in his car while another person filming the dangerous stunt laughed. This too was posted on the internet.

The escapade with a fire extinguisher was in the car park of an independent TV facilities house near what was then the headquarters of BBC Cymru Wales (BBC CW) in Llandaff, Cardiff, in 2014, and was condemned as “incredibly dangerous”. It prompted a series of outraged comments at the time on a sports Facebook (FB) site.

Yet The BBC has long been beset by controversy, not least in Wales, and this highlights too, Mr Davie’s ‘get tough’ message, and the recent tweets by Mr Phillips as well as Mr Edwards.

Mr Roderick has also said – again on Twitter – that ‘The History Guy’ (presenter Dan Snow) used ‘national’ in an archaic British sense, and it was not a good look for BBC CW. In the Crossrail 2 tweet, posted at 12.08 am, Mr Roderick responded to a message from officials there saying that the project will support 60,000 supply-chain  jobs and 18,000 apprenticeships across the UK.

In the earlier tweet before the Scottish independence referendum, which was also sent near midnight and which was later deleted, Mr Roderick said some unionists rejoiced in “threats and bullying”, but a television show hosted by Mr Roderick and filmed mainly in Scotland was still transmitted by BBC CW afterwards.

In January Samira Ahmed won an employment tribunal case after arguing that she should earn the same as Jeremy Vine, a male colleague. The BBC has faced enormous criticism too, for the huge salaries paid to presenters such as Gary Lineker, who was earning £1.75 million a year for Match of the Day before he offered to take a pay cut.

The BBC is still perceived to be too London-centric with most executives declining to move to Salford, where some programming is produced. It has been reported as well, that The BBC has a left-wing bias and is thought not to have even tried understanding what prompted people to vote for Brexit. There has, too, been criticism of the many ‘left-wing’ comics on its panel shows, although the argument is that there are few ‘right-wing’ ones.

Several senior journalists at the corporation including Emily Maitlis and Lewis Goodall, of Newsnight, have been condemned for being biased, yet its charter requires its journalism to be impartial.

The use of social media by some senior figures to comment on political issues has also caused concern. Naga Munchetty, the BBC Breakfast presenter, was found to have breached guidelines over comments about a tweet by then President Trump, but Lord Tony Hall of Birkenhead, the Director General (DG) at the time, reversed the decision. Mr Edwards, was accused of political bias after he ‘liked’ a tweet saying: “Vote Labour for the National Health Service”.

The corporation also featured in a UK newspaper giving readers details of a “brutal” report by its regulator which attacked “bias”, it has emerged. The report by regulator OFCOM stated:  “They (audiences) feel that the BBC lacks relevant content for their cohort, or that there is bias in the news”.

Controversies over impartiality (or lack of it) have also long dogged BBC CW, and it was forced to say sorry recently for ‘liking’ a ‘tweet’ attacking a political party. The tweet from Neil McEvoy MS undermined the Abolish The Assembly (AA) party, and BBC CW said that ‘liking’ it was an ‘error’.

The former leader of the Welsh Conservatives (WC) in the Welsh Parliament/Senedd Cymru (WP/SC), Andrew RT Davies, MS, accused, on social media, BBC CW of a “link” with nationalist party Plaid Cymru (PC) and that it was “unhealthy”.

Tomorrow – the Welsh academic who was sacked for “gross misconduct” yet still uses the title ‘Professor’.

The memories of Phil’s astonishing 37-year award-winning career in journalism (including 23 of them at the BBC) as he was gripped by the rare neurological disabling condition Hereditary Spastic Paraplegia (HSP), have been released in a major book ‘A GOOD STORY’. Order the book now!