Here our Editor Phil Parry looks at the importance of running orders after criticism over the biggest broadcaster in the UK leading the sport news last night on ENGLAND’S football win in the group stage of the Euros when it is meant to reflect the entire country, but Wales’ draw was treated as a minor item.

He has also disclosed why investigative journalism is needed now more than ever although others have different opinions, and how information from trusted sources is crucial.

During 23 years at The BBC (several in news) the initials were always emphasised to me – it was the BRITISH Broadcasting Corporation.

Now, though, this mantra seems to have gone out the window.

The lead item on the network BBC news sport section yesterday evening was ENGLAND’S one-nil win over Croatia in the first group stage of the football EUFA Euros. 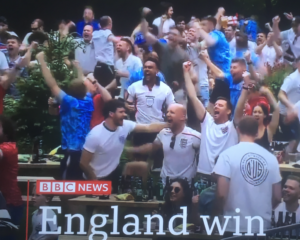 This decision is intriguing and needs to be put in context.

This was only England’s first game, it was at home (in Wembley) against a weak opposition from a much smaller country, the team has yet to reach the knock out stage of the tournament – let alone win it altogether – and the performance has been criticised by leading sports journalists.

The previous day’s draw by the Wales side many miles from home against an extremely good Switzerland team (from a country which is much bigger) was just as significant for them, but came in for rather different treatment.

It was in the middle of the running order at tea time, while later the collapse of Christian Eriksen obviously led the news. 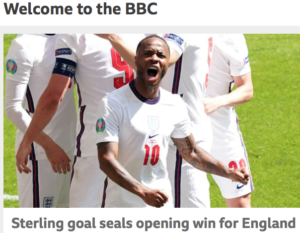 Last night, the humiliation of the England cricket squad by tiny New Zealand (which again was highly significant), came as the last item.

This was an eight-wicket defeat for England, which ended a seven-year unbeaten record in home Test series.

The famous cricket commentator, Jonathan Agnew, said: “This was one of the worst results I’ve seen in a long time”.

Scotland play the Czech Republic in the Euros later – yet it seems unlikely The BBC will lead the sports bulletin on this, even if they win by a huge margin.

However news values such as these have faced furious criticism.

One former senior sports executive with The BBC told me: “This is incredible, and sends an awful message to the other home nations. The BBC is meant to be about ALL of the UK, not just one part of it!”.

A leading UK sports journalist had a slightly different view from the one at The BBC.

James Corrigan, of the Daily Telegraph, said on Twitter: “The English reaction to England’s so-so win, at home, against a rancid Croatia, is hilarious. They not only do it every time, but actually hype it up more every time. They were ok, they were fine. But nothing more”.

Yet it seems it WAS more for The BBC, when ONE (albeit large) part of the UK scored a victory.

Is it really The BRITISH Broadcasting Corporation any more?!

Tomorrow Phil looks at the importance of the law in exposing the activities of a Welsh conman.

The memories of his astonishing decades long award-winning career in journalism (including some of the stories he covered at The BBC) as he was gripped by the rare neurological disabling condition, Hereditary Spastic Paraplegia (HSP), have been released in a major book ‘A GOOD STORY’. Order the book now!