The parents of a South Wales conman who had his legs broken when a drugs deal soured, spent years in prison, who announced his engagement even though he was still married, and was exclusively exposed by our journalists, have had to downsize to a house costing over 160 thousand pounds less than the home they have lived in for 10 years, The Eye can reveal.

Bill and Sonia Williams have been badly affected by the activities of their crooked son Howard Williams/James Daniels and have moved to a £172,000 house upon their retirement, leaving the £337,000 one they live in now.

Bill Williams ran a sofa business in South Wales, and described criminal Williams/Daniels to our Editor Phil Parry as a “complete crook”, and has posted on Facebook (FB) that he and his wife knew of their son’s past and on occasions did not like him, although always loved him.

Mr Williams Snr, has also told us how he was called by the police to Clifton suspension bridge where his son was threatening to commit suicide, and how he spent part of a Christmas Day outside the walls of Cardiff jail to be near his son inside.

Meanwhile it is clear that the activities of that prisoner, Williams/Daniels, have harmed a huge number of innocent people, and many have lost large amounts of money to him

We have shown that recently Williams/Daniels ‘ran’ a ‘restaurant’ called Billy’s Diner at Porth in the Rhondda, and had a correspondence address in Cardiff, which was offering deliveries during the lockdown, but it appears that customers to it have been duped.

One angry client said on FB the food took an hour and 20 minutes to arrive, while another declared:“I ordered a hot dog for myself, with salad and cheese, I opened the box and had one leaf of lettuce and roughly 5 grated bits of cheese, fair to say I had about two bites of it…My daughter had a chicken burger, not too much of a problem with that however had a stringy texture on the chicken, and felt undercooked, fair to say nearly everything went in the bin”.

Meat there was served raw, has been condemned as ‘disgusting’, and it has been stated on FB that Trading Standards would be contacted. 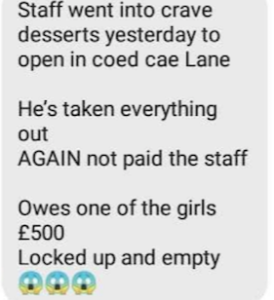 The reviews of his ‘restaurant’ ‘businesses’ (which switched to takeaways during the lockdown) were not good and it appeared he was taking orders but not sending out food.

Williams/Daniels moved to Murcia in Spain, changed his name to James Daniels, and has in the past posed as an ‘Estate Agent’, but his ‘businesses’ have been mainly in the cafe or restaurant trades, yet when he ran ‘Crave Desserts’ in Merthyr Tydfil staff said on FB they had to “beg” for money, and that it was “absolutely disgusting”.

We have also been contacted by one of the drivers for this cafe who gave us extremely disturbing information. He said:  “He (Williams/Daniels) not paying me for the work I did for him and he also not paying the other drivers. Thank god I read your report on him, it save me money and bother. The guy is a joke. I’m now £200 out of pocket, but it could be worst (sic)”.

A recent text message about the latest escapades of Williams/Daniels said that he has: “…taken everything out AGAIN not paid the staff Owes one of the girls £500 locked up and empty”.

Earlier a ‘Crave Desserts’ staff member warned others on FB: “Nobody work for Crave desserts in Merthyr town, haven’t paid some of their staff for weeks, delivery drivers and kitchen staff, always says it will be in on Friday or Tuesday and I’m still waiting 5 weeks on along with others who worked there. Always got to beg for your money, Absolutely disgusting, you work the hours and expect to be paid! They have blocked me from their page and ain’t answering my messages, fuming!

We also understand Williams/Daniels has a new partner, although we showed how two years ago he announced on social media his engagement to another woman called Danni (or Danielle) Greer while he was still married to a third person.

Our journalists have disclosed too that Williams/Daniels had opened a tanning studio in Cardiff, although like many of his past ‘businesses’ this one too soon met trouble.

Williams/Daniels has admitted to being imprisoned, but described it in a FB post as a “short while”, when his convictions in fact total more than four years. He claimed:  “…when I was younger I did spend a short while in prison for fraud in the UK”, and adds:  “Stand up to the liars (and) haters…”.

When in one of his previous ‘careers’ he conned people into thinking he was an ‘Estate Agent’, the anger of an individual was clear on a property website: “He (Williams/Daniels) makes you pay circa £10k deposit and then disappears into the sunset”.

At a property event in the South of England The Eye were told that an investor had lost £30,000 to him. 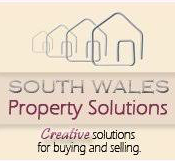 His extraordinary exploits have even been the subject of our satirical writer Edwin Phillips and Williams/Daniels has boasted of owning a boat as well as a jetski, which he has said on FB was for sale.

He has posted a YouTube interview on his property website where he brags about his property ‘expertise’. He claims he had a “massive” estate agency business, but went from earning £20,000 a week to having just £56 in his pocket and living on the streets.

Williams/Daniels also alleges he has driven expensive cars, and said in the interview that it took just  “24 hours” to turn the £56 into £1,000, yet some critics have questioned how much of this is true. One who is owed thousands of pounds by Williams/Daniels told The Eye:  “This is all made up.  He lives in a complete fantasy world!”.

Williams/Daniels has been in charge, too, of marketing for a Spanish wine bar called ‘Blanco’ in Murcia, and he announced his engagement to Ms Greer on the bar’s website, where the ‘liar’ post was also published.

But we have divulged how over one Christmas and New Year he warned customers on social media that they could no longer accept credit cards at Blanco, even though these periods are the busiest times of year for restaurants and it is almost unheard of for them only to take cash then.

He also ran dance nights at a disco in Spain called ‘Roldan’ but it closed soon after our disclosures. Following them, Williams/Daniels asked a specialist company how to “get rid” of the “negative” stories about him on the internet. He wrote:  “When I google James daniels spain or James Daniels property or James Daniels murcia a load of website links appear for the-eye.wales which are negative reviews and not true(The Eye – nothing is untrue). How do I get rid of these an(d) how much does it cost? Also how long does it take?”.

Apart from having his legs broken when an illegal drugs deal soured, we have disclosed as well, how formerly Williams/Daniels had teamed up with another ex-criminal from South Wales, who was put behind bars for drug offences, to start a ‘charity’.  He launched the ‘Crisis Housing Charity’ and asked for donations from the public in a venture designed ostensibly to help ex-convicts find homes.  The ‘charity’ gave an address in Cardiff but does not now exist.

There is, however, mounting consternation that only The Eye have covered the exploits of Williams/Daniels.

One who knows him well, told us:  “I was totally ignored when I emailed (the mainstream media) back last year, I was so hopeful when it was the Spanish national police after him.  He was also wanted for identification fraud here. Turns my stomach just thinking of what he is doing. Evil man”.

The Editor of The Eye Mr Parry, as well as his friends, wife and children, have been subjected to a torrent of abuse on social media from Williams/Daniels and his supporters, following our discoveries.

Meanwhile his ex-business partner, Sam McManus (also known as ‘Georgeson’), has first-hand knowledge of his lies. He has admitted he too was conned by him and that Williams/Daniels was a ‘sick man’. Mr McManus explained to us how he was deceived along with everyone else, and told The Eye:  “He (Williams/Daniels) has fooled many people and I can only be grateful that there are good investigative journalists like you guys who expose greedy people like him. It is embarrassing to admit that I am yet another victim of his greed”.

Among the many accusations on social media from Williams/Daniels to the family of Mr Parry, is that we are pursuing a person suffering the strain of, as he puts it, “severe mental health illness” and cases of this are well known to our Editor.

But the strain for the parents of Williams/Daniels must be far greater, if they are now having to move to a much smaller house for their retirement…

Tomorrow – the Welsh independence group member who described as a “Scab” a senior Labour MP who defended the police in a riot during which a man has been charged with carrying a homemade spear.

Mr Parry’s memories of his extraordinary decades long award-winning career in journalism (including exposing the activities of criminals) as he was gripped by the incurable disabling condition Hereditary Spastic Paraplegia (HSP), have been released in a major book ‘A Good Story’. Order the book now. The picture doubles as a cut-and-paste poster!