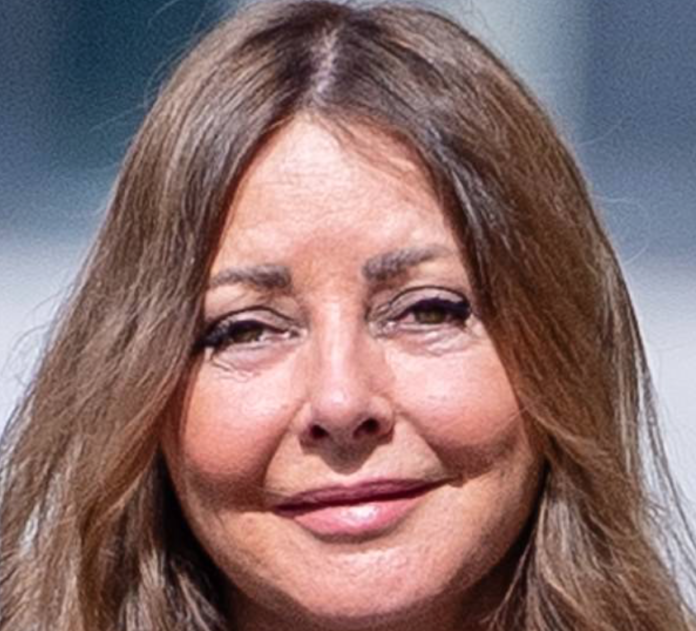 A contentious middle-aged Welsh presenter on BBC Cymru Wales (BBC CW) who complains that people focus on her “big bottom” and objected to photographers taking pictures of her as they stood on public thoroughfares but herself posted revealing photographs on social media, has hit the UK headlines for proclaiming ignorance of a dating term which is well known to younger people, The Eye can reveal.

The Express website reported that:  “Carol Vorderman was left stunned by the term ‘negging’ on her (BBC CW) radio show today”.

‘Negging’ is a word, or group of words, used to project a negative image of a potential partner.

The Urban Dictionary definition is that they are:  “Low-grade insults meant to undermine the self-confidence of a woman so she might be more vulnerable to your advances. This is something no decent guy would do.”.

But in a conversation with the comedian Kiri Pritchard-McLean on her BBC CW Radio Wales (RW) show, Ms Vorderman disclosed complete ignorance of the word.

Ms Vorderman, aged 59, then showed total confusion, and told the audience of her incomprehension: “There is so much I don’t know about negging and dating,”.

But this is not the first time that Ms Vorderman’s age has been central to reports as she has attempted unsuccessfully to be more youthful.

MailOnline reported that she had “incredible curves” and “incredibly smooth complexion” with her age prominently displayed.

These words, set alongside the age, are usually reserved for someone who has had extensive plastic surgery.

Even so, Ms Vorderman claims to be unhappy about her appearance, and has stated to newspapers: “One of the sad things is that people think I am only ever talking about the way I look. I just choose to pay no attention to it.

But she has been no stranger to being in the UK newspapers in the past, and yesterday was the target of our satirical writer Edwin Phillips.

Yet clearly Ms Vorderman’s ‘star quality’ is a great attraction for media executives, and her ‘co-host’ is not mentioned in the BBC CW schedules at all.

Recently the media have said that she was in tears and spoke of “harassment” when she spotted two photographers, one in front of her on the pavement and the other on the opposite side of the road before she drove from her home in Bristol to do the regular programme.

Ms Vorderman said on a video she shared:  “This is what happens when you walk outside your home… This is what I call harassment”. She was supposedly left “frightened” after the incident.

On her BBC CW radio programme she told listeners:  “Morning lovelies hope you slept well. Thank you for being so supportive. In the great scheme of life and what’s going on in the world what happened yesterday is tiny BUT it’s after decades of abuse & nonsense. More activity here today with the authorities. I won’t be bullied.’

But the pictures these photographers tried to take came after she shared on Twitter two photographs of herself posing in skimpy “home gym gear” to show how young she looks.

Ms Vorderman is originally from Prestatyn, yet intriguingly despite her professed love of Wales, and being pictured in a T-shirt emblazoned with the Welsh flag at a rugby stadium, she chooses to live in England.

It seems too that she is, now, part of a celebrity ‘set’.

A picture of another TV personality, this time completely naked, was sent to her and also put on social media. The photograph was placed on Twitter by the headline-grabbing rugby presenter Jonathan Davies (see story tomorrow) with the caption “Just for you Carol”.

She has also used Twitter to thank and send kisses to a controversial BBC CW radio presenter who has re-tweeted the views of an alarming commentator who endorses burning down holiday homes and setting the union flag alight.

Ms Vorderman said “Diolch Rhydian xx” to Rhydian Bowen Phillips who stated on Twitter that it had been good to see her at Broadcasting House.

Yet Mr Phillips has enraged many listeners to his show on BBC Radio Cymru (BBC RC) after re-tweeting the comments of ‘Jac Jolly’ about the Welsh language, who has said on social media that he is proud cottages in Wales were burned down and tweeted that: “The UJ should be burnt despicable rag that it is” with an emoji of a burning flame following the remark.

It is clear that Ms Vorderman’s Twitter friend, Mr Phillips, holds extremely trenchant views himself and has also re-tweeted a comment claiming that a Brexiteer is “stupid”, as well as “A ruptured pustule on the anus of the country …and…I utterly despise you”.

He presents on BBC RC at Saturday lunch time, and was a guest during the wedding of BBC Wales Today (WT) and Radio Wales (RW) presenter Lucy Owen (Cohen) to fellow X-ray host Rhodri Owen, in 2004. He has also been reported to the Football Association of Wales (FAW) for using abusive language on social media.

It appears Ms Vorderman may have used strong language as well, after being ‘snapped’ by the two photographers who were standing on a public road trying to get pictures of her.

Tomorrow – more alarming information about the TV presenter who sent a naked picture of himself to Carol Vorderman.

The memories of our Editor Phil Parry’s extraordinary 36-year award-winning career in journalism as he was gripped by the rare neurological condition Hereditary Spastic Paraplegia (HSP), have been released in a major book ‘A GOOD STORY’. Order the book now!