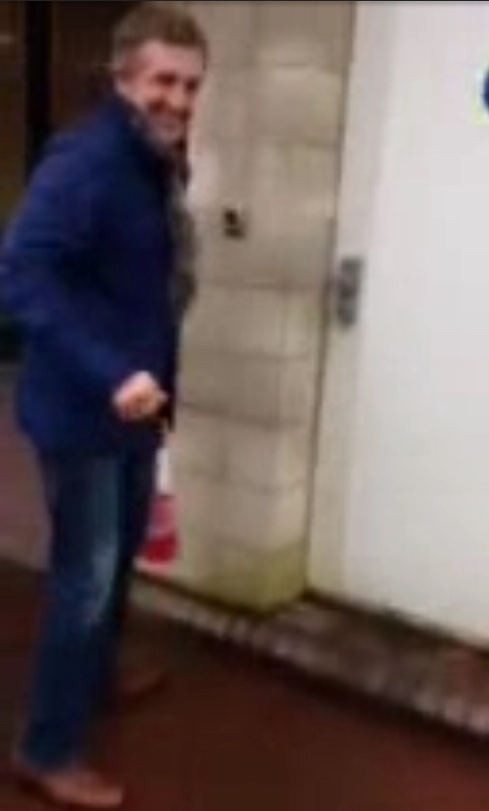 Expert warnings have been repeated about the hazards involved in the misuse of fire extinguishers after being shown shocking pictures from a video of controversial Welsh rugby legend and commentator, Jonathan Davies, using one to spray into the face of former international referee, Nigel Owens, as he sat in his car while another person filming the dangerous stunt laughed, The Eye can reveal.

In the clip now on YouTube, Mr Owens escapes from the car running, but Mr Davies uses the fire extinguisher again as the person filming it exclaims in Welsh “OH, NO!”.

Mr Owens then shouts “IDIOT!” at him pointing.

After being shown stills from the film six years ago, South Wales Fire and Rescue Service repeated its stern warning about the misuse of fire extinguishers.

The escapade in the car park of an independent TV facilities house near BBC Cymru Wales (BBC CW) in Llandaff, Cardiff, in 2014 has been condemned by others as “incredibly dangerous”, and it prompted a series of outraged comments at the time on a sports Facebook (FB) site.

According to one magazine/website at the time:  “Owens has since tweeted a link to the video, which suggests that he was pretty OK with the whole incident, or at least he is now”.

According to the 1974 Health and Safety at Work Act it is a criminal offence to misuse any safety equipment, including fire extinguishers.

In Section 8 it states: “No person shall intentionally or recklessly interfere with or misuse anything provided in the interests of health, safety or welfare in pursuance of any of the relevant statutory provisions”.

In a safety message Leicester University has alerted people to misuse of a fire extinguisher and said that any person “caught doing so will be subject to a charge of £100, disciplinary procedures may be implemented and a report may be made to the police”.

Sports fan Mike Flynn who presented a daily radio programme on BBC CW at Broadcasting House nearby, and has seen the video told The Eye:  “I will make these comments on his (Mr Davies’) juvenile antics. He does not appreciate the risk of death using a foam extinguisher in a confined area such as a car. The discharge of a fire extinguisher renders it useless in a real fire, and for someone in his position involved in such juvenile horseplay encourages others to repeat the antics”.

But this is not the first time Mr Davies has hit the headlines.

The famous fashion designer David Emanuel declared on Twitter in 2018:  “Surely, there HAS to be another Welsh RugbyCommentator instead of Jonathan Davies??? Irritating.  TalksTooMuch. Tired. WakeUpPlease!!@BBCSport @BBCCymruWales”.

Key words were hashtagged and he included a picture of the Welsh flag. Mr Davies (whose nickname is ‘Jiffy’) then replied:  “More faces than a totem pole you”.

Mr Emanuel is best known for designing, with his former wife, the wedding dress of Diana, Princess of Wales, and participated in I’m a Celebrity…Get Me Out of Here! in 2013.

He joined a chorus of more recent disapproval about Mr Davies who has faced a storm of criticism following statements which have included calling an MP a “knob”.

Just a few weeks ago Mr Davies used Twitter to post a fake picture of one detractor, a well-known Welsh rugby fan, wearing a Pontypridd RFC shirt but he was then slammed for “essentially fat shaming someone because they disagree with them”, and the observer linked the comment to @BBCSport @BBCNews 5liveSport and @BBCWalesNews, saying they should be “embarrassed”, and that it was a “Dick move”.

‘I know it’s very hard for you to do your job professionally but please try. #6nations2019’. Another added: ‘When oh when will the BBC retire Jonathan Davies?!?! ‘I’m sick to death of his whiney “Wales are brilliant”, everyone else are lucky commentary’. ‘So the secret to watching rugby on the BBC is to mute the sound and listen to 5Live on your DAB radio, no Jonathan Davies! #6nations2019,’ another added.”

He proclaimed too on live television before an international rugby game, that the referee was French so “anything could happen”.

Earlier the fury of Mr Davies had also been directed at journalist Marcus Stead who had criticised what he views as the Welsh establishment.

But the descriptions about his behaviour with a fire extinguisher were less than great for him, when people who saw film of the caper said it was incredibly dangerous, and the fire service have now repeated warnings about its hazards.

Tomorrow – why the media in Wales are under threat as never before.

Our Editor Phil Parry’s memories of his astonishing 36-year award-winning career in journalism as he was gripped by the rare neurological disabling condition Hereditary Spastic Paraplegia (HSP), have been released in a major book ‘A GOOD STORY’. Order the book now!