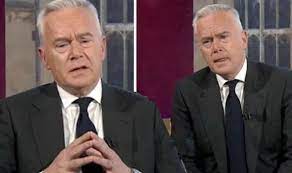 Controversial Welsh BBC television newsreader Huw Edwards has been fiercely attacked in the media for his coverage of Prince Philip’s funeral, it has emerged.

Several newspapers said viewers “switched to ITV” and it was claimed he ‘talked over’ footage.

The Mail described Mr Edwards’ “constant inane chatter”, while The Sun said: “…his presenting left many viewers reaching for the remote”. 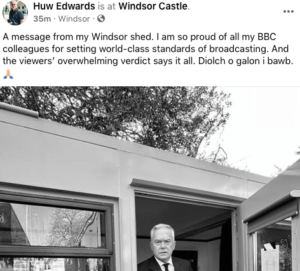 Part of one ‘story’ in The BBC’s reporting online of the Duke of Edinburgh’s funeral was headlined: “Prince Philip: Royal Family honours duke’s ‘humour and humanity'”.

After consulting maps of the area, it appeared that Mr Edwards’ booth was next to a car park overlooking the souvenir shop, whereas ITV’s was near Windsor Castle and a green lawn on a bright, spring day.

On YouTube a commentator accused the transmission of being “indefensible” a “disgrace”, and “appallingly unprofessional”

But plainly Mr Edwards is proud of his, and The BBC’s coverage of the proceedings.

He has announced on Facebook (FB): “A message from my Windsor shed.  I am so proud of all my BBC colleges for setting world-class standards of broadcasting. And the viewers overwhelming verdict (!) says it all. Diolch o galon i bawb.” Accompanied by an emoji of two hands clasped.

The salary for Mr Edwards (who wore a dark suit and tie during the coverage) was reported to be between £520,000 and £529,999 as of July 2018, and in the past he has been strongly attacked for bias by publicly showing support for Wales and opposition political parties on social media.

He was ordered by his superiors to drop a post of himself in front of a Welsh flag which he declared was a “backdrop for @BBCNews at Ten”.

Mr Edwards also stepped in following the performance of the Welsh rugby team being criticised in The Daily Telegraph before a crucial match in The Six Nations tournament. 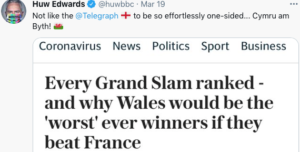 “Every Grand Slam ranked – and why Wales would be the ‘worst’ ever winners if they beat France”, ran the newspaper’s headline, to which Mr Edwards responded with heavy irony: “Not like the The Telegraph to be so effortlessly one-sided… Cymru am Byth!”

Using social media on the eve of the game (when during it, the rugby punditry of his BBC colleague Jonathan Davies was also condemned on social media), Mr Edwards proclaimed:  “Gutted my pro-flag tweet has been cut down in its prime. By order. But it will be back tomorrow – by popular demand. Meanwhile enjoy this magnificent flag – one of my favourites. Hashtag SixNationsRugby Hastag FRAvWAL” – with a series of emojis included.

Before the gripping match, a supporter of his shared a series of pictures on Twitter (including one of Mr Edwards being licked by his dog), which he showed his approval of, by saying: “Share the love this epic thread was the tonic I needed – before kick off”. 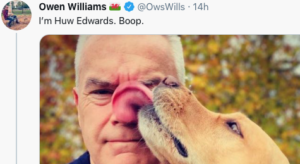 But these messages fall into a familiar pattern, and in an earlier post Mr Edwards had endorsed, too, an opinionated columnist who said she was a “Welsh woman” and that the BBC Proms made her feel like a “foreign tourist”.

He had backed controversial writer and academic Laura McAllister’s Twitter announcement that there was less than two months before she stood for election to a football governing body’s council.

Yet six years ago (well before the row over how the proms are presented), Ms McAllister had written in her regular Welsh newspaper column:  “I do realise that my national identity has been shaped and expressed largely through sport, but the Proms’ Union Jack waving (albeit with a smattering of European, Welsh and Scottish flags mixed in) and Rule Britannia make me feel like a foreign tourist”.

However by supporting Ms McAllister so publicly, using social media to emphasise his defence of all things Welsh and Labour policies, as well as now ‘forcing viewers to switch to ITV‘ because of his coverage of Prince Philip’s funeral, Mr Edwards has apparently posed a dilemma for his overall boss, The Director General of the BBC, Tim Davie.

Mr Davie has been clear in his guidance that issues of neutrality are paramount – especially when impartiality is under attack worldwide.

The BBC rules state: “If your work requires you to maintain your impartiality, don’t express a personal opinion on matters of public policy, politics, or ‘controversial subjects’”.

They also emphasise that staff should avoid using disclaimers such as ‘My views, not the BBC’s’ in their biographies and profiles, as they provide no defence against personal expressions of opinion.

Recent messages on social media, though, are not the first time that Mr Edwards has made his opinions plain, once more seemingly putting himself at odds with the rules. 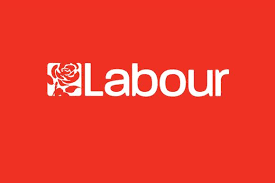 Recently he attacked as well a critique of the break-up of the UK by historian and journalist Max Hastings, who he claimed had made “errors” in his article.

Mr Edwards’ comments in support of Wales are often seized on by a headline-grabbing nationalist website which is backed by the taxpayer through the Books Council of Wales (BCW).

After the remark about Plaid Cymru (PC) it ran a ‘story’ that:  “Broadcaster Huw Edwards has protested the BBC’s new rules on using social media by unleashing a cascade of Welsh flags”.

But the Editor of NC, Ifan Morgan Jones, is himself contentious, and has been in trouble for accepting an advert from the Bangor University’s (BU) journalism course that HE teaches on, which critics claimed was a blatant conflict of interest. They have also stressed the disturbing fact that teaching ‘journalism’ in this context appears odd when being unbiased is an important part of reporting.

But perhaps Mr Edwards is also used to bad press after he was fiercely attacked for The BBC’s coverage of Prince Philip’s funeral, when viewers were ‘forced to switch over to ITV’…

Tomorrow – we reveal more disturbing details about a controversial battery company which abandoned plans to locate in Wales.