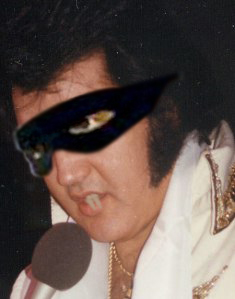 Since the death of Elvis Presley on August 16, 1977, rumours about a conspiracy have persisted. The conspiracy goes like this.  Elvis faked his own death and entered a witness protection program because on August 15, 1977, he gave evidence against a criminal organisation known as “The Fraternity”.  This, of course, is nonsense.  The fact of the matter is, he faked his own death because he became a vampire as part of a fad diet. The diet didn’t work.

For years after his “death” Elvis remained underground.  He found being “dead” gave him greater freedom to pursue his favourite pastime of fighting crime.  At first, he was tackling things like bank robberies and muggings on an ad-hoc basis using the time honoured superhero method of lurk and pounce.  He wore a mask for two reasons. The first to conceal the fact that he was Elvis; after all, he was undercover. The second was that if the mask was dislodged during a fight, his enemy would be so staggered that they were being beaten up by Elvis they would lose their composure and fall prey to his sneak pincer move.

Unfortunately, after a while, he realised he wasn’t actually doing much good. The problem was all down to numbers.  Being a vampire, he could only fight crime at night.  This ruled out at least 50% of all crime. The other thing was that, on a good night, he could capture/beat up about five or six criminals. That would average out at about 2,000 crimes a year whereas the total number in America alone is close to 14,000,000. Eventually, he decided he needed to get tough on the causes of crime.

He journeyed to Washington DC and infiltrated, first the FBI, then the department of justice and even the Executive Office of the president. Each time he came across the same problem. The issue was just too big; too complex. There was no cause of crime. It turned out to be a many-layered problem of social and economic inequality, urban neglect, rural neglect, over criminalisation of specific activities, substance misuse, societal attitudes, and any number of other factors relating to education, healthcare, readily available firearms and rampant, free-market consumerism. That doesn’t even begin to take into account the fact that some people are just horrible.

After years of getting nowhere, he resolved to move to somewhere more manageable. A smaller or more law-abiding country. At first, he went to Canada. This seemed to have less crime but it was still way too big a problem to be solved by one man randomly beating up street criminals. Again he entered the system of government; again he grew disillusioned with the prospect of ever changing anything. He decided to downsize even more. Three years later he ended up in Iceland, a country with a population of barely more than 300,000. Here he felt he could make a difference. Besides which, it was dark for most of the year, which meant he could take up jogging and finally shed those extra pounds.

Unfortunately even Iceland proved too tricky and complex a problem for a, by now, thoroughly dejected Vampire Elvis. Moving on from Iceland he searched and searched the world for a country small and simple enough to be the place where he could make a difference. After failing to master the social complexities of the Pitcairn Islands he eventually moved to Wales where he was given a ministerial position without portfolio.

For months he haunted the corridors of power, eager to do his bit to fight crime until one day in December 2013, First Minister the Rt Hon Carwyn Jones AM placed a paternal hand on his shoulder and took him to meet The Standard Spending Assessment and New innovation fund Communities First Avengers (SSANIFCFA for short) .

It was to prove a fateful day for all concerned.