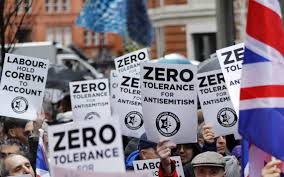 An anti-Semitism pressure group highlighting a Welsh nationalist party’s “history of virile antisemitism” and accusations of prejudice against its founder, throw the spotlight on the fact that it is continuing to endorse a candidate standing for election despite her making anti-Semitic comments, The Eye can reveal.

Wales Against Anti-Semitism (WAAS) tweeted: “In publishing the report, (into remarks by Plaid Cymru (PC) candidate Sahar Al Faifi) it’s a shame @LSRPlaid@Plaid_Cymru & the Chief Executive didn’t take the opportunity to acknowledge the Party’s own history of virile antisemitism – the most notable example being that of founder Saunders Lewis & the need to apologise and make amends”.

But recent controversial events are unlikely to impress WAAS.

Ms Al-Faifi will continue to stand as a candidate for PC as a South Wales Central list candidate in the May elections to the Welsh Parliament/Senedd Cymru (WP/SC), only being the subject of a ‘review’ which was then published in the report, by PC’s Westminster parliamentary group leader and MP for Dwyfor Meirionnydd Liz Saville Roberts, despite admitting making anti-Semitic remarks.

The ‘review’ aimed to ensure there was a ‘zero-tolerance’ approach to anti-Semitism within the party.

But it appears that one of the organisations battling it does not have the support of senior members of PC, and the WAAS Twitter account had earlier been blocked by former leader Leanne Wood.

Following Ms Al-Faifi’s comments being brought to light, the Board of Deputies of British Jews (BDBJ) was alerted, and there were calls for her expulsion from PC.

The BDBJ said the decision to allow her to seek election sent a message that “anti-Semitism is tolerated in Plaid Cymru”.

The letter stated: “It is a hallmark of anti-Semitism to attempt to blame Jews for the world’s ills”, and added that the tweet followed “years of anti-Semitic behaviour”.

She was suspended by PC in 2019, but reinstated in February over her social media messages, although last year she had admitted that some of her posts had crossed “the boundary of criticism of Israel into anti-Semitism”.

Following these revelations, a review of anti-Semitism in the party (which appears to have sympathisers at very high levels in Wales’ biggest broadcaster) was conducted

She made a series of recommendations, including giving training to those who considered complaints.

In 1936 he said of Adolf Hitler:  “At once he fulfilled his promise – a promise which was greatly mocked by the London papers months before that – to completely abolish the financial strength of the Jews in the economic life of Germany”.

He wrote in a 1926 edition of the party magazine Y Ddraig Goch:“It’s a low, churlish thing to slur a man by calling him a Jew”.

He is among many others who are ‘celebrated’ in Wales, but have deeply disturbing pasts.

At least the past of Mr Lewis is now being highlighted, even though he is venerated by PC supporters as the party’s founder, and a woman who admitted sending anti-Semitic messages is still being allowed to stand as one of their candidates…

Tomorrow – the problems exposed in launching a new ‘national’ newspaper for Wales.