Home News State of the nation

After the controversial announcement of a new Director of Content & Services at BBC Cymru Wales (BBC CW) who was Chief Executive of a political party, here our Editor Phil Parry examines the presentation of more evidence of the extraordinary links between the country’s biggest broadcaster and a nationalist group.

During a career in journalism of almost 38 years, I’ve never seen anything like it!

A fundamental tenet of the media is to be neutral, and when you are covering politics you shouldn’t show any evidence of favouring one party over another.

But we have seen yet another example of the extraordinary links between BBC Cymru Wales (BBC CW) and Welsh nationalist party Plaid Cymru (PC), with the appointment of Rhuanedd Richards as Director of Content & Services.

BBC Scotland (BBC S) has nothing like the strength of these connections with the Scottish nationalist party SNP.

The former leader of the Welsh Conservatives (WC) (now reinstated) in the Welsh Parliamnt/Senedd Cymru (WP/SC) Andrew RT Davies, MS, has in the past accused, on social media, BBC CW of a “link” with PC, and that it was “unhealthy”.

This appointment will do nothing for the cause.

The unbelievable controversy Mr Davies alluded to, over the relationship between PC and BBC CW came soon after growing concern about figures who have joined the corporation from PC, and those that have moved in the other direction.

The facts about Ms Richards’ rise and rise, emerged hard on the heels of information about the political journalist at BBC CW Aled ap Dafydd becoming PC’s Director of Political Strategy and External Relations.

Ms Richards’ headline-grabbing background with PC has also featured on The Eye, with her antecedents apparently showing her political leanings.

Before that Ms Richards was PC Chief Executive, and she was an adviser to the former leader of the party, Ieuan Wyn Jones.

The tweet today from the PC MS for Ceredigion Elin Jones, says it all: “Am apwyntiad ardderchog. Cwbwl haeddianol a mae’r BBC yn lwcus iawn. I know I’m biased. I’ve known @Rhuanedd for many years. She’ll be inspirational in shaping the future at @BBCWales”. 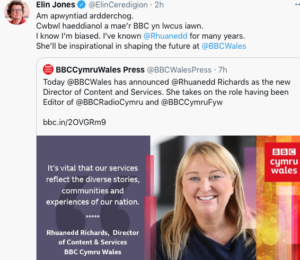 The PC MS for Ynys Mon in the WP/SC is Rhun ap Iorwerth who was formerly a leading political journalist at BBC CW, joining the corporation in 1994.

The BBC CW website declares that he “leads the development and implementation of strategic and policy issues for BBC Wales as well as being responsible for the delivery of its educational mission. He’s also responsible for the BBC Wales archive which is currently being transformed through a major digitisation programme”.

It goes on and on, and a number of other individuals I know about, have joined BBC CW from PC, have made the opposite manoeuvre, or have seen their star in the ascendancy as with Ms Richards.

Phil’s memories of his remarkable decades long award-winning career in journalism (including his years at BBC Cymru Wales [BBC CW]) as he was gripped by the rare disabling condition Hereditary Spastic Paraplegia (HSP), have been released in a major book ‘A GOOD STORY’. Order the book now!