Our satirical writer Edwin Phillips reads an alternative joyful column by ITV Cymru Wales presenter Andrea Byrne in the property magazine Cardiff Life which is pushed through doors in the city, to make up for the unfortunate fact that in the latest edition she no longer appears, to bring everyone enthralling updates on her baby following the captivating news about little Jemima’s progress which was usually offered in the glossy magazine.

I realise you have all missed my regular reports on how baby Jemima is doing so I thought I would tell you anyway.

I know it will have cheered up your humdrum worlds to hear about the details of the glamorous life of an internationally recognised TV superstar.

My husband, the former international star rugby player Lee (Byrne), and I told you all how hard it has been bringing baby Jemima into the world of international superstardom.

The South Wales Echo said that we “opened up” about our fertility treatment known as IVF, and how right they were!

I understand of course you will have been fascinated to hear that we “started trying for a baby following a romantic New Year’s Day wedding ceremony in 2012” and that my hubby Lee, the former international star rugby player (Byrne), had “always wanted to be a dad”.

As the South Wales Echo put it so well:  “… out of the blue Andrea was told she was pregnant with Jemima, who changed their world …”

Or as I said in my much-missed Cardiff Life column: “Thankfully ITV is a very forward-thinking organisation and Lee (the former international star rugby player [Byrne]) is a very supportive husband”.

I know from the flood of a letter that the details I wrote, have been greeted with relief by my fan, when I told him: “I’m busy preparing for my return to work post-maternity. 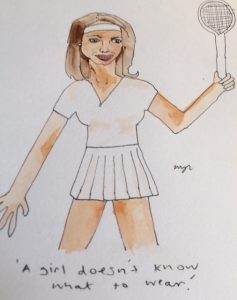 “… I’ve been trying to give my presenting persona some practice runs and remind myself what it’s like to string proper sentences together again”, I said in my usual hilarious fashion (this is because I have had a baby and am back after maternity leave, which you may not understand).

This is the kind of news I acknowledge the readers of Cardiff Life really want not (I have been reliably told) the information about properties no one can ever afford, pictures of people you have never heard of, and vacuous articles headlined ‘CONSCIOUS CREATIVITY’ so that you put the magazine straight in the bin.

You want details of ME and my baby Jemima!

In the past it has also been in my gift to offer all-important announcements in Cardiff Life about my private life, which have included going to a health spa:  “My treatment was… divine. Seventy blissful minutes… I was in heaven”.

Further crucial details have also been offered by me, such as:  “I can safely say the products used here are some of the kindest on the market when it comes to looking after the health of your nails.”

And:  “I was determined to find time to carry on (with yoga) when I became a mum.”

You can tell I read the news!

I am so open that I have even been prepared to give my fan vital revelations about my husband, the former international star rugby player Lee (Byrne).

These have included:  “Thanks to dad Lee (the former international star rugby player [Byrne]) again, I was so grateful to take 48 hours out to immerse myself in yoga again, in a beautiful coastal setting alongside ten other like-minded yogis.”

In my generosity I have provided significant details like:  “As well as blissfully relaxed, I also felt revitalised and rejuvenated…” and engrossing information about taking the baby on holiday with my husband the former international star rugby player Lee (Byrne):  “Passports, tickets, money and now we can add THE KITCHEN SINK!”.

I have also exclusively disclosed further important information in Cardiff Life about my baby, such as:  “When she wasn’t sleeping or swimming, Jemima easily attracted quite a holiday fan club.

“She rocked her pink baby sunglasses wherever she went and there’s little doubt she was the coolest – and I think the cutest – baby in the resort! Though, of course, I may be a just a little bit biased!”.

Crucial details on the progress of my baby, were all there to be enjoyed in my Cardiff Life column, such as:  “…it won’t be long until Jemima has grown so much that we’ll no longer be able to have her in the baby carrier…”.

Why cannot those stupid Editors realise that this is what the readers want?!

I understand your dull lives will have been brightened up by such news, so I also wrote that Jemima and I “paid another visit to the ITV Cymru Wales Cardiff studio to see all my news colleagues, which was very exciting”.

It will have been absorbing for my fan to learn that “Jemima settled straight into telly life, beaming for the camera”.

He wrote to me (clearly in code): “I am fed up to the back teeth hearing about your baby.  Why do you write this air-head rubbish?”.

Evidently he wants to know more about Jemima, and that my hubby Lee, the former international star rugby player (Byrne), and I have “opened up” in the South Wales Echo about our “dream baby”. 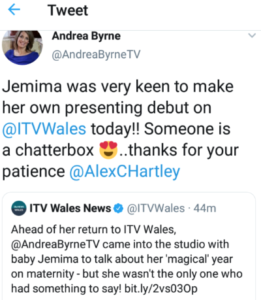 If only those Editors at Cardiff Life realised how important this is, they might give me space between all those features about expensive weddings, write-ups entitled “Scene” and articles like the one on having a “luxury adventure at the Maldives resort Huvafen Fushi”…

Our Editor Phil Parry’s memories of his extraordinary 37-year award-winning career in journalism as he ‘opens up’ about being gripped by the incurable disabling condition Hereditary Spastic Paraplegia (HSP), have been released in the major book ‘A GOOD STORY’. Order the book now!