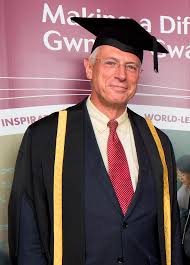 It has been widely-reported that the standards Czar of the National Assembly for Wales was forced to resign following news that secret recordings were made, but it has not been published how this extraordinary event shines a spotlight once again on the scandal which has hit Swansea University and only The Eye have highlighted it.

Perhaps Assembly officials are aware of it.

Sir Roderick Evans had been the Assembly’s Standards Commissioner for three years, but quit after a damaging remark about AM Neil McEvoy was accidentally recorded, saying what had been taken down was “out of context and misleading”, and the police have now been called in.

Yet Sir Roderick was also Pro-Chancellor of Swansea University which has been engulfed by controversy after the Vice-Chancellor Richard Davies and the Dean of his School of Management were first suspended then sacked for “gross misconduct” and a police investigation has been launched into alleged bribery in a multi-million pound land deal. It seems unlikely he was unaware of what has happened.

It has emerged that properties in Swansea, Carmarthenshire and Kent were searched as part of the huge continuing inquiry.

During the probe South Wales Police said the regional crime unit executed “a number of warrants as part of an investigation into alleged bribery offences. Seven addresses in Swansea, Carmarthenshire, and Kent are being searched with the assistance of colleagues”. The searches had involved officers from South Wales, Dyfed Powys and Kent Police forces.

They followed a complaint from Swansea University to the Serious Fraud Office in late 2018 which was referred to the police, and centred on a vast £250 million land re-development deal.

The land deal, called the ‘Wellness’ village, had laudable aims – to improve the health and wellbeing of people across the area, as well as creating 2,000 high-quality jobs and boosting the economy by £467 million over 15 years. It had been described by its backers as the “largest ever regeneration project in South West Wales”. But it has been beset by controversy from the start.

The investigation was being carried out as an astonishing and highly defamatory anonymous internal computer campaign by someone calling him or herself ‘Your friend’, was launched to undermine it, which Sir Roderick may have known about as the messages were sent to senior officials at Swansea University.

Part of one of them stated:  “As your Institution’s suspensions farce continues through its eight(h) month, you may wish to reflect on the person responsible for it and the standard of professional conduct (he) deem(s) appropriate”.

It included an official UK Government document naming Andrew Rhodes, the Registrar and Chief Operating Officer at Swansea, adding tendentiously:  “Properly declaring interest to your employer and following the rules are important things; pity not everybody manages to do this”.

After the included UK Government document, the message continued:  “If you hold him (Mr Rhodes) to the same standard, now is the time for the ready-made Deputy Vice-Chancellor/Registrar, Professor Steve Wilkes, to support your new Vice Chancellor (VC) to deliver once again an era of unimaginable gold and honey, interrupted following the appointment of your current Registrar.

“Only this can stop the exodus involving (then Pro Vice-Chancellor [PVC]) Professor Hillary Lappin-Scott and your Director of Finance (who were leaving or had left) – or, has the latter been deported? Your Friend”.

“P.S.: By now, the scales must fall from your eyes that suggestions of the police used as a tool to scare you from seeking the truth is purely a tactic to keep your scrutiny at a distance. It is for You to ensure that justice is done.”

In one angry gmail from ‘Your friend’ our Editor Phil Parry was named as being against the land deal. In another, following disclosures about a ‘university’ project in Kuwait, which forms part of the investigation along with the ‘Wellness village’, and was headlined ‘destruction of value and relationships’, a further series of unlawful claims against a named individual were made, and among the few lines we can publish is:  “I am confident we should expect retaliation by the Kuwaitis”.

The phrase ‘gold and honey’ was used a number of times during the extraordinary anonymous campaign at Swansea University – in reference to support for the controversial Professor Lappin-Scott, mentioned by ‘Your friend’, who we first revealed has announced that she was leaving the troubled institution, and in a note to staff before departing admitted that it had been a “challenging” time.

This, along with the departure of the Finance Director, is the ‘exodus’ described in the anonymous campaign during Sir Roderick’s tenure.

A further gmail was sent, like the others, to the university’s Chair of council Sir Roger Jones and staff as well as the senior politicians and journalists, coming from a different created address which has also been used in the past, called ‘Lilith Sumerian’. Others have also been employed including ‘The iniquities Of the selfish’ and ‘Ivs Titia’

In the past ‘Your friend’ has also claimed the investigation had involved huge costs and included “malice and incompetence”.

A senior police source told The Eye exclusively: “We will be looking closely at this to see whether any laws have been broken”.

The Eye have also been alone in reporting the first official response to the campaign from Swansea’s ‘Associate Director Vice-Chancellor’s Office, Head of Legal and Compliance Services’ stating: “The matters under investigation are very serious. The University has invested a significant amount of resource investigating the alleged misconduct, as have the authorities. It is essential that nothing is done to undermine the on-going processes. They must be allowed to run their course without interference.”

Before the campaign, The Eye showed how the institution of which Sir Roderick is Pro-Chancellor, had employed a convicted fraudster called Steve Chan who used to work on a contract at the management school, and began when we had exclusively revealed that a previous Dean there accused of bullying had died.

His jail term imposed at Boston law courts was followed by three years of supervised release, after he admitted one count of conspiracy to commit fraud and one count of mail fraud, he was also ordered to pay restitution of $12,596,298. We revealed that Chan had even represented the university in advising an international agency on the ways to combat fraud.

But university officials have been less keen than the anonymous campaigner to give The Eye information – this time about Chan’s background, and we have been told in the past our questions about him in a legal Freedom of Information Act (FOIA) request had been refused on the grounds they were “vexatious”.

The management school of the troubled institution where Sir Roderick is Pro-Chancellor also has close ties with a leading Welsh think tank named after a former First Minister of Wales, which has hit the headlines too.

The Morgan Academy, took its name from the late Rhodri Morgan, who as well as being the former Welsh First minister had also been Swansea University Chancellor. The Welsh Assembly Member Helen Mary Jones headed up the academy in the past and has recently said there had been “no due process” in the inquiry running alongside the police investigation which has resulted in the dismissals of Professor Clement and others from the management school.

The former Dean of the university’s management school, Nigel Piercy, left under a cloud after two turbulent years in charge, and contrary to convention, his death (which we also first revealed) was not marked in traditional fashion by Swansea. Professor Piercy quit following relentless pressure from The Eye, when he clashed repeatedly with staff, warned them the school was “not a rest home for refugees from the 1960s with their ponytails and tie-dyed T-shirts”, and described trade unionists as “unpleasant and grubby little people…usually distinguished only by their sad haircuts, grubby, chewed fingernails and failed careers”.

It seems that a blot on the career of Sir Roderick was being caught making a damaging remark on a secret recording – even if it was ‘out of context’.