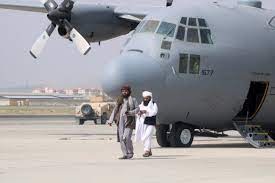 Revelations that the extreme Muslim group which has taken over Afghanistan are in talks with Qatar about the future of the country’s main airport, shine the spotlight on Cardiff’s controversial link up with Qatar’s state airline, and how Wales’s biggest airport was bought by the taxpayer for millions of pounds when another in Scotland cost just a pound.

They could too put centre stage the fact that troubled Cardiff Airport (CA) has again caused huge anger on social media, and prompt accusations once more that it appears doomed, after one low-cost airline announced the postponement of flights from there until next year.

It has been reported that the Taliban may be in talks with both Qatar and Turkey about the future running of Kabul (Hamid Karzai International) Airport, while a spokesman for the organisation which has controversially seized control of Afghanistan, Zabihullah Mujahid, said they are now busy securing the site.

Numerous media outlets have reported that a jet from Qatar carrying a technical team landed last Wednesday to talk about reopening the airport.

The Daily Mail item said:  “A Qatari jet landed at Kabul airport today – the first since western mercy flights stopped late Monday – carrying a technical team that aims to get the airfield back up and running”.

The information has come after details of CA linking up with the state-run Qatar Airways (QA), which was greeted with enormous fanfare both from the mainstream media, and senior Welsh politicians, when the contentious move was announced three years ago.

This news was despite the fact that the UK Government had warned potential travellers to Qatar that they faced major risks, and it stated on its advice website:  “Terrorists are likely to try to carry out attacks in Qatar“.

Qatar denies backing groups linked to Islamic State (IS), although it does admit it supports the Muslim Brotherhood.

In interviews, Carwyn Jones (First Minister of Wales [FMW] when it was announced) stated:  “We would like to work with his excellency (Akbar al Baker the Chief Executive of QA)“.

But it is obvious that this ‘boost’ or ‘transformation’ is now set against a growing cost, with aggrieved potential passengers turning to Bristol Airport instead of CA more and more during the pandemic.

Another passenger who saw his holiday flight cancelled, said: “I booked these flights at a good price and yet again we have to use Bristol and not support CWL (the international code for Cardiff) !”.

Other recent comments about CA’s performance on FB have been extremely critical, as well.

A further FB post from a different person was: “the situation is dire… the survival of the airport as a Civil concern is dependent on how long Mr Drakeford (Mark Drakeford – the FMW) is willing to pump our money into the place – plus a bit of luck” with a worried face emoji after the disturbing message.

A huge number of complaints followed the announcement from the headline-grabbing Hungarian budget airline Wizz Air (WA) that it will not fly from CA until at least next year, blaming the decision on pandemic restrictions.

The backdrop for this initial news about WA flying from Cardiff was the extraordinary acclamation it received in the Welsh media (it had been described as a ‘British’ airline in the South Wales Echo [SWE], and it IS London-listed, but eastern Europe-focused, and WalesOnline appeared to have reverted to ‘Hungarian’ in a more recent report about it postponing the flight).

Disturbing comments like these follow other alarming details, including about CA being hit harder than any other in the UK by the pandemic, raising serious questions among experts concerning why it was bought by the taxpayer in the first place for £52 million, when Glasgow Prestwick was purchased by the Scottish Government for £1, and putting, they say, its long-term future in doubt.

One told The Eye: “These latest figures are damning of Cardiff Airport, and show the folly of buying it for millions of pounds”. A further aviation specialist said to our journalists: “This just shows it was ridiculous to pay all that money for Cardiff Airport. Bristol is doing much better. I just don’t see that it has a future.”.

The problems caused by these worrying figures have been exacerbated for CA by the news that (apart from WA postponing coming to Cardiff and possible talks being underway between the Taliban and Qatar) another airline operator collapsed just weeks after it announced two new routes from the airport.

The Irish firm Stobart Air has appointed a liquidator, and the sudden announcement that it was ceasing trading came hard on the heels of it revealing on May 5, two new routes to Dublin and Belfast, which were to begin from Cardiff later this summer.

But perhaps another route to Qatar may not be advisable if the Taliban are in talks with the country about the future of Afghanistan’s main airport there, shining the spotlight on the link up with Qatar’s state airline, and how Wales’s biggest airport was bought by the taxpayer for millions of pounds when another in Scotland cost just a pound…