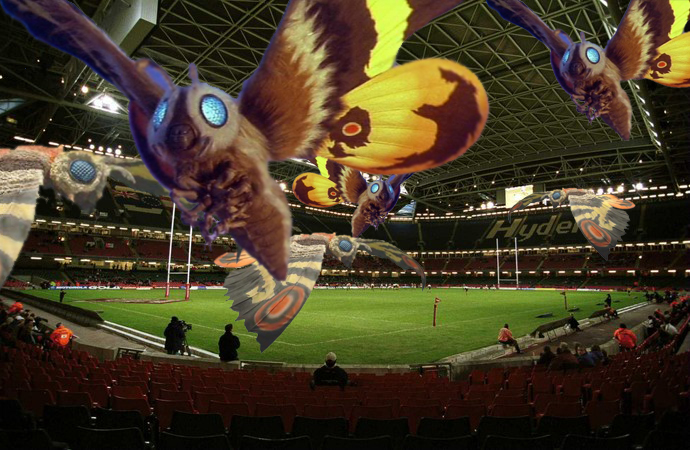 Cardiff Council today issued a press release detailing their intention to develop a Mothra breeding programme to counteract the Godzilla threat from the Swansea Bay Tidal Lagoon independent finance initiative. The Principality stadium is the perfect incubator and Ministry of Defence funding will supply the £24m needed to balance books at Cardiff Council.

Mothra, (a giant mutant moth-type creature) is widely believed to be the mortal enemy of Godzilla and is number 1,282 on the World Wildlife Fund’s endangered species directory.

A spokesman for the council, whose name (Jeff Sarphngywumpts) remains unpronounceable for legal reasons, stated “The Mothra breeding season fits in perfectly with the current requirements of the Principality Stadium events calendar”.  He added “Barring unforeseen events we anticipate no more than a dozen or so fatal incidents in the first two weeks and then almost none for a few days.  The Mothras are very friendly and mostly not too killy on weekends”.

Pressed further on the “killy” aspects of the Mothra life cycle Mr Sarphngywumpts started complaining about “Fake News” and said he was “By far the most persecuted of all the press officers announcing reckless policy decisions”.

From what we can gather the plan is to house the Mothras in the Principality Stadium until they are mature enough to engage in a world-shattering conflict with giant sea dwelling, fire breathing, nuclear mutant lizard creatures. In anticipation of the breeding program the stadium owners have replaced the standard floodlights with one giant light bulb in the middle of the ceiling. “To make them feel at home”.

The issue of what to do with the Mothras when the stadium is being used for international matches has been solved by a simple but ingenious plan.  They will be released above the stadium on chains like advertising blimps where they will promote local businesses and deter Godzilla attacks. This is the first initiative of its kind in the UK and Cardiff Council say

“If all goes well and the death toll can be kept to a reasonable level then we see no reason why the scheme cannot be extended to include other existential threats like that big thing from Cloverfield or even giant robots piloted by tiny men pulling levers”.