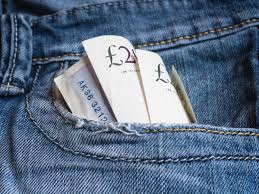 The taxpayer has been funding a website run by a failed media executive and ‘comedian’, who made sick ‘jokes’ about a murdering gunman, used bad language to abuse prominent Welsh politicians on social media, was placed under police investigation, and has been officially reprimanded, The Eye can exclusively reveal.

An annual public grant of £100,000 is funnelled into the online ‘news’ site ‘Corgi Cymru (CC)’, but our investigations have shown the dubious past of the man behind it originally, and the funding may now face accusations that it has become a mere ‘toy’ for Welsh nationalism.

In announcing the money earlier this year, the Books Council for Wales (BCW) said: “Golwg 360 and Corgi Cymru will each receive annual funding of £100,000…which will run from April 2022 until March 2026”.

But CC was run by Huw Marshall, and lengthy inquiries by our journalists into his previous activities have revealed disturbing practices.

It is now owned by the giant organisation Newsquest Media Group (NMG), which backed an unsuccessful newspaper for which he was the driving force, The National Wales (TNW), after which its website also closed.

However surely the civil servants behind the funding will have known that two people had died and a police officer lost the sight in both eyes when rampaging gunman Raoul Moat shot them, yet despite this on July 8, 2010 – with him trying to escape from armed police – Mr Marshall published a message on his Facebook (FB) site, reading: “Hi I’m a sexy 19 year old blond (sic) from the North East of England looking for some fun. 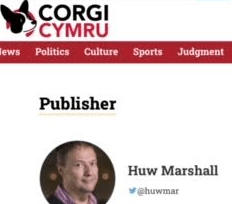 Following many other offensive comments, Mr Marshall was told off by Twitter because an account  “violated the Twitter Rules”, and a further one, “Welsh Bollocks”, had also broken their regulations.

The abuse from him of senior politicians, came nine years ago, with one of his remarks hurled at the Labour MS and minister Ken Skates, while another was directed at the former Liberal Democrat AM Peter Black.

After Mr Skates tweeted in celebration of a one-vote council by-election victory over Welsh nationalist party Plaid Cymru (PC) in Ruabon, Mr Marshall (who has himself stood for PC) referred to him in his own tweet as a “gloating t**t”, and he described Mr Black as a “humourless (sic) t..t”, as well as a “dull, tedious t..t”.

Apart from these sorts of remarks and the Twitter admonishment, it is thought that Mr Marshall may also be responsible for sending unwanted takeaways to people’s homes.

In response to the police inquiry into his actions, Mr Marshall said on Twitter that he had told South Wales Police (SWP) he intended to make a complaint, however officers answered by informing him that they had a “responsibility to investigate any reports”.

Following The Eye bringing this out, along with many of Mr Marshall’s other previous controversies, he attempted to have us closed down, alleging “violent threats and harassment”, when there have been no threats of violence from our journalists, and the only harassment has come from him after he used social media to dub senior Welsh politicians “t**ts”, and our Editor Phil Parry a “liar”.

But interesting, high-profile characters endorsed another of Mr Marshall’s failed ventures, even while there were accusations that ‘stories’ in it had been lifted from other publications.

The headline-grabbing Welsh Parliament/Senedd Cymru (WP/SC) member for Blaenau Gwent, and former Welsh Government (WG) minister, Alun Davies, MS, declared on Twitter before the launch  of one of them (TNW) “Well.  I wish you best of luck with this initiative. Anything to strengthen our news environment should receive a warm welcome”.

A ‘warm welcome’ was given, as well, to the ‘pilot’ for TNW which was also wished “Best of luck” by WG minister Lee Waters, although he seemed to have changed his tune when he actually read it.

Another reader of the paper’s first edition (who is also a prominent journalist) said:  “It (TNW) starts with worthy statements about how we deserve better fearless, independent and unintimidated media in Wales and should be happy to pay for it then gives us a timid, third rate product filled mainly with political comment from compromised sources who wouldn’t know a truth if it whacked them over the head with a cricket bat.

The journalists union NUJ, though, expressed grave concern at the impact on jobs when news emerged last month that TNW was to close altogether after only 18 months (the newspaper version shut earlier this year).

Meanwhile Mr Marshall’s own ‘New Media Wales (NMW)’ on the internet, or the ‘pilot’, have also made headlines other than in TNW, with the ‘stories’ being described in Private Eye (PE) as “cut and pasted from other news organisations”, and they have been highlighted, as well, by The Eye. He has published an article about a doctor learning Welsh, which bore a striking resemblance to an item on the website of a centre which teaches the language to adults, Nant Gwrtheyrn.

Mr Marshall headlined ‘his’ story: “Aldey Hey Choldren’s Hospital doctor on learning Welsh” when it is in fact AldeR Hey and, of course, CHILDREN’S (correct spelling is critical, too, for aspiring journalists).

Yet, even while talking of the ‘crisis’ which engulfed TNW, Mr Marshall seems to remain almost permanently positive, and has written: “We have a plan to launch a National Sound and Vision platform… Diolch Huw Marshall”. As well as: “This week after 18 months of providing Wales and the wider world with original quality news coverage The National Wales will cease publication. A victim of the deepening economic crisis that has seen subscriptions in digital services decline and advertising revenues fall“.

Clearly Mr Marshall has support, despite the fact that he has been investigated by the police and insulted senior Welsh politicians. 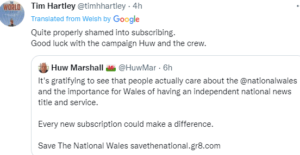 The journalist Tim Hartley tweeted: “Quite properly shamed into subscribing.  Good luck with the campaign Huw and the crew”. Other onlookers, however, were highly-critical.

One of them, David Owens a features writer with special interest in the arts, wrote on Twitter: “Do you know what I find amusing, truly laughable. A certain person who bangs on about the need for media plurality in Wales, yet can’t stop slating the honest efforts of others trying to make a difference.  They’d be better off taking ownership of their continued failures”.

The comment was aimed at statements such as this grand one from Mr Marshall: “A free and independent media is the lifeblood of any democracy…”.

It appears, though, that inquiries by ‘free and independent’ The Eye (unsupported by the taxpayer), are unwelcome to Mr Marshall as moves have been made by him to shut us down, with an approach made to a specialist internet company.

Evidently Mr Marshall does not know his journalist libel law either (which may, perhaps, have contributed to the winding-up of his TNW), because he has said on Twitter that Phil, is a ‘liar’ and an “obsessive coward”, linking the inaccurate comments to an earlier piece he had written about the scheme. Mr Marshall has also called Phil a “self proclaimed journalist”, which may not be libellous but is provably wrong as he trained to be a journalist in 1983 on the best newspaper course in the UK before moving into television, and has won an enormous number of awards.

Mr Marshall has declared, too, that he has a number of different Twitter accounts, but says he reserves one for items which may bother Phil, declaring: “@marshallmedia is where I post Everton related stuff and things that upsets Phil Parry”.

Taxpayers may also be upset by our revelation that their money goes to support the website of a man who made sick ‘jokes’ about a murdering gunman, used bad language to abuse prominent Welsh politicians on social media, was placed under police investigation, and has been officially reprimanded…

Details of Phil’s astonishing award-winning journalistic career (including revealing facts that others would rather keep hidden), as he was gripped by the rare neurological condition Hereditary Spastic Paraplegia (HSP), have been released in a major book ‘A GOOD STORY’. Order it now!