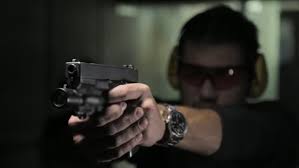 It is extraordinary how violence appears to loom large in the lives of Welsh extremists.

The right wing founder of a controversial new Welsh independence party whose Chairman warned that Wales should not be a “dumping ground for (English) misfits” posted on his contentious right wing blog a picture of a 1960s paramilitary leader pointing a gun at the camera.

Now the review on a Welsh nationalist website of a book about another revolutionary leader has stated that Prince Charles could have been shot at his investiture in Caernarfon castle 50 years ago.

The shocking statement on Nation.Cymru comes in a new biography of John Jenkins the leader of the revolutionary group Mudiad Amddiffyn Cymru (Movement for the Defence of Wales). In the biography of Mr Jenkins, he claims that Prince Charles could have been killed in 1969.

He says in the book: “We could have killed him… For one thing, I was a sergeant in the British Army’s Dental Corps, and was on duty in Caernarfon that day. I could have carried a rifle and I could have shot him there and then if I wanted.

“Furthermore, if I’d said ‘Right, I want a couple of people who are prepared to do something and not come back from it’, I know at least two who would have come forward and volunteered. I’m talking about a suicide operation.”

The book was to have been launched on Saturday afternoon at Waterstones in Wrexham in the company of the author and Mr Jenkins.

Meanwhile the picture of Cayo Evans pointing a hand gun at the camera appeared on the ‘Jac o’ the North’ blog written by retired heating engineer Royston Jones. His blog proclaims it is: “Interpreting Wales from a Right of Centre Nationalist perspective”.

Mr Evans was the leader of 1960s paramilitary group Free Wales Army (FWA) and it has been reported that the Official IRA (OIRA) gave or sold, most of its weapons to the organisation as part of its turn away from political violence. But Mr Jones who founded the Welsh independence party Ein Gwlad (Our Country/Land) (EG) has praised him as a “friend” and “comrade”.

After our revelations a hotel where he was to announce the formation of EG sent a message to Mr Jones notifying him:  “With regards to … concerns, we have now cancelled your meeting room with full refund of payment”. He then advertised on his blog a new venue, with the words: “I am delighted to announce that a meeting has been arranged for November 18th in Aberystwyth to discuss the formation of a new political party to defend Wales’ interests”.

EG was finally unveiled at Llanelli later last year and another nationalist blog had ‘reported’ earlier that a first ‘conference’ was to be held before the end of the year.

It was extremely difficult establishing where the meetings were held of EG as these were not widely published, but the ‘manifesto’ was posted on social media on February 17 and stated: “Exposing the wrong doings of the colonial establishment will eventually wake people up in a colony – which is what Wales still is”. Mainstream political parties in Wales, such as Labour, were heavily criticised in the ‘manifesto’ which added:  “The Conservatives and the Lib Dems followed suite (suit?), prefixing their names with ‘Welsh’, although in reality they are England based parties operating as foreign parties on our soil”.

Apart from posting on ‘Jac o’ the North’, the picture of Mr Evans holding a gun, we have shown how Mr Jones has also celebrated his youthful links to the FWA, and in his published photograph others look on laughing as the group’s leader holds the pistol.

His new party is committed to a ‘flat rate of tax’ which was floated by the right wing think tank, The Adam Smith Institute, whose report does not adequately explain how the flat tax would not just be a tax break for the rich. But EG proclaimed:  “By adopting a flat rate of tax with appropriate allowance and rate, lower and medium earners would be better off, while higher earners would pay slightly more but not excessively so”.

Despite this, officials at the party’s ‘launch’ said:  “Ein Gwlad is unequivocally committed to achieving a fair and prosperous independent Wales, in the shortest practical timescale”. One supporter said the party’s policies would raise Wales “from under the crushing heel of unionist repressive policies that have with held the country from achieving its full potential”.

Yet EG had been mired in controversy even before its ‘launch’. Another backer has stated publicly:  “When the day for the official launch arrives, we’ll be fully kitted and armed”. A supporter also said before the ‘launch’:  “Jac o’ the North says that following a successful first meeting the details of a new Welsh political party should be revealed in March 2018 once they are ironed out”.

Meanwhile Mr Jones’ support for the FWA and previous statements have been questioned, and it seemed our Editor had become something of an irritant. On November 19 Mr Jones had written on his blog:  “The meeting yesterday went very, very well. I was delighted with the turnout and with the enthusiasm shown…perhaps the one disappointment – given the interest he’s shown in the new party – was that Phil Parry of The Eye wasn’t there. You could have had a scoop, Parry – ‘Shock! Horror! irritating little git thrown out of meeting”.

The Eye - 4th June 2020
%d bloggers like this:
We use cookies to ensure that we give you the best experience on our website. If you continue to use this site we will assume that you are happy with it.OKNORead more