Revelations that millions of pounds in fees connected with plans for a controversial new Welsh cancer centre have been spent before the business case has even been approved, have once again focused attention on the role of the contentious rugby commentator in charge of raising funds, The Eye can reveal.

Former Wales rugby international Jonathan Davies (whose Twitter name is @JiffyRugby) is President of Velindre Fundraising but has been accused of talking “some shit”, as well as being “so so thick”, was filmed using a fire extinguisher in a dangerous prank, and was condemned on social media as “irresponsible”, spreading “bullshit”, and re-tweeting “a lie”, before he drew a furious response to a deleted tweet which could have advertised breaking lockdown rules.

A Freedom of Information Act (FOIA) request disclosed that Velindre University NHS Trust had spent £20 million on plans for a new hospital building on the Northern Meadows in Whitchurch, Cardiff, and the extraordinary bill included £7,630,048 for technical advice alone.

But the head of the fundraising exercise for the new cancer centre, Mr Davies, has been described on Twitter as “irresponsible, disrespectful and crass” after he ‘re-tweeted’ a message saying:  “lockdowns are unnecessary” hashtagging CV19, and a deleted tweet about lockdown was also followed by angry replies on Twitter. 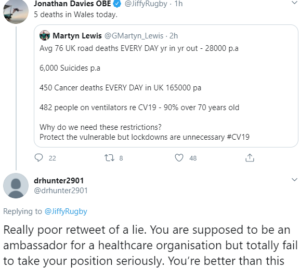 One detractor said about it that “Advertising breaking the lockdown rules is not a good idea…”.

Yet the Welsh Government (WG) rules clearly state that the rules were imposed to combat the spread of coronavirus/Covid-19, and they have been underlined by the announcement of a lockdown for the whole of Wales until November 9.

A different critic who had seen the ‘re-tweeted’ message that lockdowns were unnecessary, replied to Mr Davies:  “You are supposed to be an ambassador for a healthcare organisation but totally fail to take your position seriously”.

As well as being President of Velindre Fundraising Mr Davies is also a well known television presenter, but The BBC has issued new guidelines on the use of social media which he appears to disregard.

Senior doctors have also raised major concerns about the Velindre plans, with around 57 cancer experts calling for an independent review of the proposals.

In the past, Mr Davies has demanded of one of the campaigners against the scheme on social media:  “Have you or anyone close to you ever been unfortunate enough to have cancer?”

He has also been accused of being ‘misleading’, publishing ‘rubbish’ and ‘ranting’, after stating on social media that the plans for Velindre would leave 60 per cent of a meadow available to walkers when protesters say surveys have indicated all will be destroyed.

Contradicting him, one protester declared about the project: “The whole area will be bulldozed, £27 million of public money just to access this unsuitable site…” Another cautioned:  “Let’s talk Jonathan, not rant”.

A further shocked viewer of Mr Davies’ recent ‘re-tweet’ of a message that “lockdowns are unnecessary” said:  “This seems close to being a Covid conspiracy theory now”.

Conspiracy theories connected with the pandemic have a long and disturbing history.

The myths about the virus include the absurd notion that the disease can be cured by drinking methanol, which has led to more than 700 deaths in Iran, and that it is spread by 5G transmitters, which has convinced arsonists in the UK to carry out dozens of attacks on mobile phone towers.

In the spring, masts in Britain, the Netherland, Ireland, Australia and New Zealand, were attacked, with fire damaging 100 masts in the UK alone. 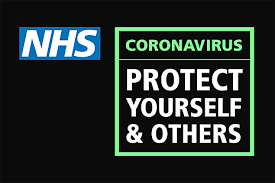 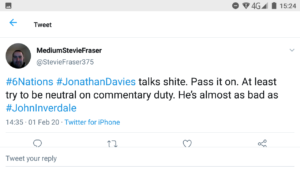 Yet the commentary style of Mr Davies, too, has come under fire – this time before, during and after The Challenge Rugby League Cup final.

On The Challenge Rugby League Cup final occasion a distraught supporter asked why sport executives could not have found someone: “more relevant than Jonathan Davies” with another upset emoji following the remark.

But this is not the first time that Mr Davies has been at the centre of controversy with the use of social media at its heart.

Warnings were repeated about the hazards involved in the misuse of fire extinguishers after experts were shown alarming pictures from a video of Mr Davies using one to spray into the face of former international rugby referee, Nigel Owens, as he sat in his car while another person filming the dangerous stunt laughed, which was also posted on social media.

The escapade with a fire extinguisher was in the car park of an independent TV facilities house near what was then the BBC Cymru Wales (BBC CW) headquarters in Llandaff, Cardiff, in 2014 and has been condemned as “incredibly dangerous”.

Another declared that Mr Davies was a “fucking prick”, while a further attacker stated that he didn’t think “people realise how dangerous CO2 extinguishers are”.

On social media Mr Davies has recently also sent a picture of himself with no clothes on to TV and radio star Carol Vorderman.

He has too faced huge criticism following statements which have included calling the Rhondda MP Chris Bryant a “knob” on Twitter (which has been the insult as well hurled at Mr Davies himself in the current ‘re-tweet row’), for asking about childcare during a House of Commons debate.

The fury of Mr Davies has also been directed at journalist Marcus Stead on social media after he had criticised what he views as the Welsh establishment.

Perhaps this may too not be the end of money gone on the controversial scheme for a new cancer centre in Cardiff, after an FOIA revealed that huge amounts of cash have already been spent, and the man in charge of raising funds has been accused of talking “some shit”, as well as being “so so thick”, was filmed using a fire extinguisher in a dangerous prank, and was condemned on social media as “irresponsible” for spreading “bullshit”.

Tomorrow – when the law is an ass.

Our Editor Phil Parry’s memories of his astonishing 37-year award-winning career in journalism (including exposing the mis-deeds of famous people) as he was gripped by the rare neurological disabling condition Hereditary Spastic Paraplegia (HSP), have been released in a major book ‘A GOOD STORY’. Order the book now!