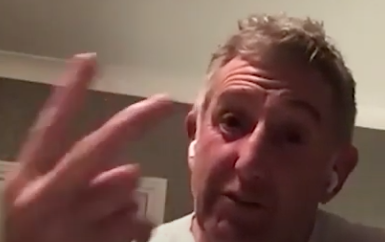 A controversial top Welsh rugby pundit employed by the BBC has used foul language on social media to abuse publicly a fan and called others ‘bell ends’, The Eye can reveal.

The shock news about rugby expert Jonathan Davies (whose nickname is ‘Jiffy’) underlines the importance of new corporation guidelines about the use of social media.

Last month Mr Davies said on the YouTube podcast ‘Jiffy and Stubbsy’ that he was “saddened” another contributor was not using social media, adding:  “I don’t give a monkey’s about the bell ends…”.

It has also emerged that seven years ago he told a rugby fan on Twitter:  “fuck you and your lads” cock”.

After seeing the tweet and comment on YouTube, a leading sports journalist who supplies material for UK publications, told us:  “He (Jonathan Davies) really is a disgusting individual”.

But he appears to be nervous about other reaction he receives on social media.

Yet it seems that some of the criticism may be valid, and Mr Davies, who is an extensive user of Twitter, has rarely been far from the headlines for the wrong reasons

He has been publicly condemned by television viewers for talking “some shit”, as well as being “so so thick”, and was filmed using a fire extinguisher in a dangerous prank.

On social media Mr Davies has recently sent a picture of himself with no clothes on to TV and radio star Carol Vorderman.

The fury of Mr Davies has too been directed at journalist Marcus Stead on social media after he had criticised what he views as the Welsh establishment.

Conspiracy theories have a long and disturbing history.

They are particularly relevant now after the US Presidential elections, with Donald Trump seizing on conspiracy theories to say the Democrats ‘stole’ the election but providing no evidence to support his charge that there was ‘mass fraud’.

The myths today about the pandemic include the absurd notion that the virus can be confronted with the drinking of methanol, which has led to more than 700 deaths in Iran, and that it is spread by 5G transmitters, which has convinced arsonists in the UK to carry out dozens of attacks on mobile phone towers.

The UK Government is worried too about militant ‘anti-vaccination’ (‘antivax’) groups which might disrupt the roll out of a vaccine to protect people against coronavirus/Covid-19.

The army has mobilised an elite ‘information warfare’ unit renowned for assisting operations against al-Qaeda and the Taliban to counter online propaganda against vaccines, as the UK prepares to deliver its first injections.

Soldiers are already monitoring cyberspace content about the pandemic and analysing how citizens are being targeted online, and is gathering evidence of vaccine disinformation from hostile states, including Russia.

Many of those protesting against lockdowns appear to be influenced by antivax propaganda.

Conspiracy theories have claimed, too, on Google and Twitter, that the pandemic was a cover for a plot by billionaire Bill Gates to implant trackable microchips into people.

Yet the commentary style of Mr Davies has also come under fire – this time before, during and after The Challenge Rugby League Cup final.

On this occasion a distraught supporter asked why sport executives could not have found someone: “more relevant than Jonathan Davies” with another upset emoji following the remark.

Contradicting him, one campaigner declared about the project to re-develop Velindre Hospital: “The whole area will be bulldozed, £27 million of public money just to access this unsuitable site…”

Warnings were also repeated about the hazards involved in the misuse of fire extinguishers after experts were shown shocking pictures from a video of Mr Davies using one to spray into the face of former international referee, Nigel Owens, as he sat in his car while another person filming the dangerous stunt laughed.

This too was posted on the internet.

Another declared that Mr Davies was a “fucking prick”, a further detractor stated that he didn’t think “people realise how dangerous CO2 extinguishers are”.

Behaviour like this, though, as well as Mr Davies’ comments sit uncomfortably with the new guidelines announced by BBC Director General Tim Davie which tell presenters: “…don’t express a personal opinion on matters of public policy, politics, or ‘controversial subjects’”.

But perhaps saying ‘fuck you’ to a sports fan, and calling people ‘bell ends’ or ‘knobs’ is not seen as ‘controversial’…

Our Editor Phil Parry’s memories of his astonishing 37-year award-winning career in journalism (including news behind the headlines of sport) as he was gripped by the rare neurological disabling condition Hereditary Spastic Paraplegia (HSP), have been released in a major book ‘A GOOD STORY’. Order the book now!