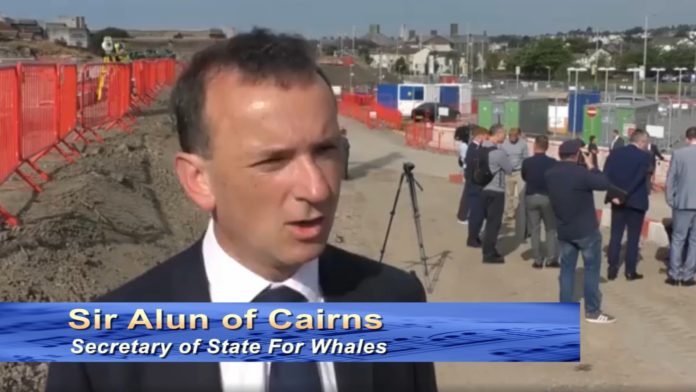 The Secretary of State for Whales, Sir Alun of Cairns, was in Swansea this week to open Swansea’s very own Museum of Roadworks.  An extension to the National Maritime and Industrial Museum it features a state-of-the-art fully non-functioning roadworks experience to rival the real thing.  Sir Alun spoke to our reporter using his mouth.

“The Prince of Wales UNESCO World Heritage Roadworks museum is what the people of Swansea voted for.  It’s the will of the people and that innit.  The £4 million from the UNESCO World Heritage Fund has meant we can show the world what has been achieved by successive generations toiling ceaselessly to destroy the city’s transport system, not only for car users but also for pedestrians and public transport as well.

This achievement is unequaled anywhere else in the world.  This museum will enable people everywhere to discover how the human spirit can learn to accept any level of inconvenience for any length of time as long as the reasons behind it are cloaked in mystery and the promises made are sufficiently far fetched that nobody ever believes them.

What you can see behind me is the interactive part of the museum which includes a children’s play area and they’ve got stuff in there that the children do like.  Fully operational earth movers with giant drills and rotating blades.  Piles of unstable rubble Big drums full of unstable chemicals. If we’re lucky we might end up with a few superheroes.  That was a joke.

We’ve fully tested them for safety and the results were… Well mixed if I’m honest but it’s early days.  Inside the porta cabin are the virtual reality visualisations where people can see the plans for the roadworks over the next twenty, thirty, sixty years.

We’ve also invested in real time Google Earth where visitors can see real live people trapped in the real-life roadworks and help guide them to safety via non-lethal drone technology with a carrot dangling from it.

We’ve put a fantastic team together with years of experience between them, some of it to do with museums and that.  One of them went to a museum once, a big one too.  He said they had ice cream and everything. And there was stuff in glass cases so..

It’s the thought that counts. Dinosaurs he said they had. We haven’t got any dinosaurs.  We have however got the best museum of roadworks in the world.

About the Swansea roadworks. The best museum in Swansea about roadworks in Swansea.  Unless you count the actual roadworks.  Can something be a museum when it’s still an actual thing?  I don’t think it can.

Anyway, as you can see all the stuff that’s here is good roadworks stuff it’s like digging stuff and….  We’ve got the barriers with the red and white.  It’s all good… Some dirt and that…

I have it on good authority that this museum will form the backbone of Swansea’s next application to become City of Culture.  The fact that the conceptual roadworks are now in their 61st year without anyone managing to figure out what they are for makes them way more arty than that shark in a tank of water.  Sharks live in water for Christ sake how intriguing can it be?  Put it up a tree and fair play…

Stick a moustache on it or something innit.”

Read the writings of NotSoGreatDictator –