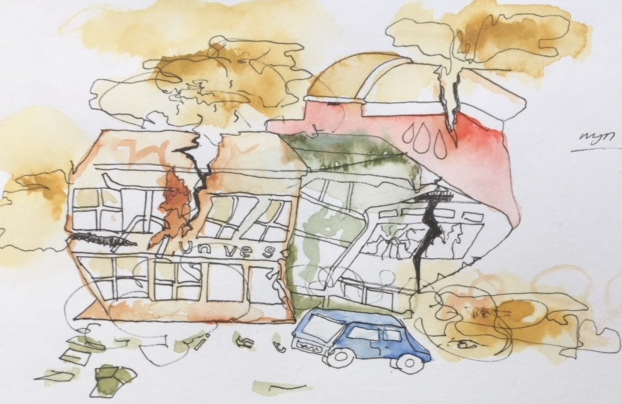 A controversial university in Wales where staff say they are “too frightened to talk” publicly about what they claim is chaos, and has strengthened a code of practice on freedom of speech, proclaims winning “… the highly prestigious title of University of the Year 2021”, it has emerged.

Cardiff Metropolitan University (CMU) proudly declares the award by Times Higher Education (THE) despite the fact it has also advertised for a Deputy Vice-Chancellor (DVC) saying it’s another institution, and used the wrong logo with picture.

The irony of the award appears to echo a comment from the Queen in 1992 that it had been an “annus horribilis” (Latin for ‘horrible year’) after publication of intimate conversations between Diana, the Princess of Wales, and James Gilbey from a tape recording of their phone calls, and a fire in Windsor Castle, one of the Queen’s official residences.

Leading academics in Wales are perplexed by the announcement, and one told The Eye: “If they are the best, what on earth are the worst like?!”

This however has not been the only award for CMU recently, and other ‘achievements’ of the contentious university were featured in the incorrect advert for a new DVC, when it explained it was for Cardiff University (CU), and published that institution’s logo as well as photograph. 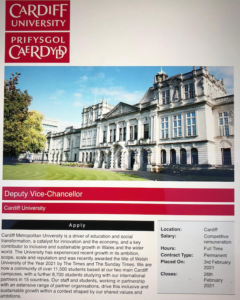 In the advert CMU announced that it “was recently awarded the title of Welsh University of the Year 2021 by The Times and The Sunday Times”.

This time for the THE prize, the headline-grabbing Vice Chancellor (VC) Cara Aitchison, was clearly thrilled, and said: “The entire Cardiff Met community is absolutely delighted to have won what is widely regarded as one of the most significant awards in the UK Higher Education sector”.

There may be delight in some quarters, but documents tell another story, showing that, as well as publishing the wrong notice for a new senior staff member, the institution has also acknowledged it must do more to allow internal critics to speak out. Minutes of a “SPECIAL MEETING OF THE BOARD OF GOVERNORS” given to The Eye, from March 11 2021 state clearly that the university seeks to “explicitly strengthen the University’s commitment to freedom of speech and academic freedom”. This then became official policy at CMU, with the declaration: “The Board Resolved. 1) To approve the proposed Code of Practice on Freedom of Speech”.

The latest worrying information of the THE award is set against other disturbing information, too, after we were contacted by numerous academics at CMU, that leading officials who have oversight of the institution are “turning a blind eye even though a grievance has gone straight to them”. Our journalists have also received alarming complaints that the fresh people who have been brought in are of low calibre, and subservient to Professor Aitchison.

Yet a ‘whistleblower’ at CMU says it is just further evidence of “more controlling and lack of trust”. One source added that it had become madness at the institution, saying:  “It’s starting to go mad again”. The contact told The Eye earlier:  “I can’t wait for the REF (Research Excellence Framework) results … Research across the university is at an all time low”.

A spoof Twitter account was created which was widely followed by staff at CMU, and The Eye have shown previously how another source at CMU told us the atmosphere was “feverish”, while more than two and a half times the amount of money had been spent on legal fees compared with the year before, and the astonishing events at the university became a source of amusement for our satirical writer Edwin Phillips.

Meanwhile a number of staff who left had been required to sign ‘gagging’ clauses. One angry former worker at CMU gave us the names of others who had sought their own legal advice, but in his words they “have been shown the door”.

Another of our contacts at the university said to The Eye:  “It has become obvious amongst all of us that anyone in CMU mentioning (The) Eye is immediately under suspicion for being one of your sources.  They are afraid of the truth about the shambles … at CMU getting out into the mainstream media. Even UCU (University and College Union) colleagues are afraid to speak out which is indicative of the atmosphere here.” 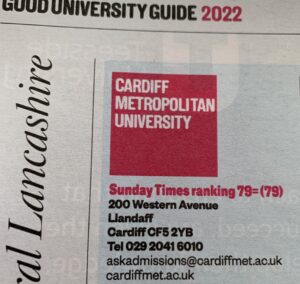 Yet, despite CMU’s proud announcement of the THE award, it seemed the massive changes at the university did little to improve its performance earlier. It was ranked 108 in The Times and The Sunday Times Good University Guide 2019 – which meant it had plunged 18 places in only a year, and one of our sources at CMU said it had “nose dived”.

But our own inquiries of the university about the growing crisis under Freedom of Information Act (FOIA) legislation, were met with a blanket refusal to provide answers.

As with our questions to another controversial Welsh higher education institution, officials at CMU have stated that the queries to them from our Editor Phil Parry were “vexatious”, although it was clear that all was not as it should be within CMU. We were given details of alleged “bullying”, and a different staff member got into trouble for “not eating a sandwich within the designated lunch hour” when officials from Human Resources were allegedly called in.

A number of Professor Aitchison’s staff had analysed the statistics given in the document and were deeply unimpressed. One told us:  “In the VC news update there are some obvious discrepancies in some of the cherry-picked figures that any academic can spot”. The source claimed there were major differences in anticipated turnover in the paper for 2018/19 to the statistic given in the Strategic Plan for CMU, and continued: “So which figure is correct? The previously published strategic plan or the latest Pravda update?”.

Even as the scandal at CMU has been kept from the mainstream media, The Eye have been inundated with desperate comments from distressed academics, and one said they are “demoralised and demotivated”.

It may be viewed as ‘vexatious’, too, if an institution where staff say they are “too frightened to talk” publicly about what they claim is chaos, and has strengthened a code of practice on freedom of speech, has been named ‘university of the year’…

Tomorrow – how, after 23 years with BBC Cymru Wales (BBC CW), and 38 years in journalism (when he was trained to use clear and simple language, avoiding jargon), Phil knows better than most, why an important rule of journalism is that the same story must not be repeated. However, an exception involves star actor Johnny Depp.

The memories of Phil’s astonishing decades-long award-winning career in journalism (including reporting ‘awards’ for controversial institutions) as he was gripped by the rare disabling condition Hereditary Spastic Paraplegia (HSP), have been released in a major book ‘A GOOD STORY’. Order it now!