Home News Rider on the storm

A storm of protest was provoked on social media by the controversial commentary of contentious Welsh rugby legend Jonathan Davies, it has emerged.

Describing his broadcast, one rugby league fan said on Twitter that he talks “some shit”, another stated he is “so so thick”,  a further supporter declared he was “annoying” and a different viewer proclaimed he was  “irritating”.

Pleas were made by the BBC television audience during coverage of the Challenge Cup rugby league game, to dispense with the services of Mr Davies.

It was claimed by a separate fan watching the match, about executives:  “…they ruin it with Jonathan Davies”.

But this is not the first time the commentary style of Mr Davies has made headlines for all the wrong reasons.

Recently another of his attackers stated in a Tweet that he was “tedious”, and that he should be removed from The BBC’s rugby league team.

A fellow fan claimed on social media that Mr Davies “ruins” the game, and a supporter has also pleaded that he should “shut up”. 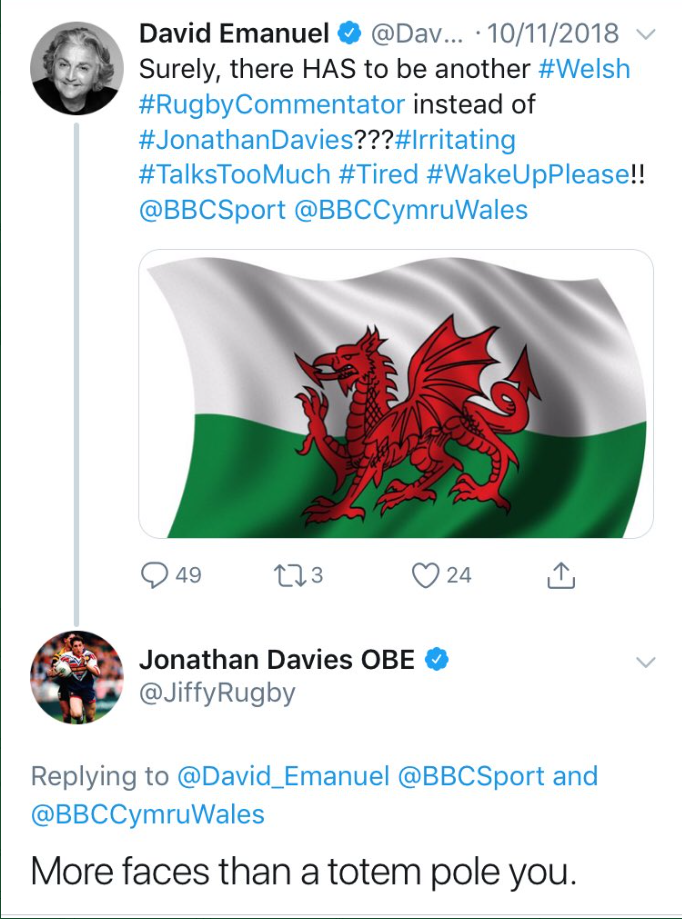 ‘I know it’s very hard for you to do your job professionally but please try’. Another added: ‘When oh when will the BBC retire Jonathan Davies?!?! ‘I’m sick to death of his whiney “Wales are brilliant”, everyone else are lucky commentary’. ‘So the secret to watching rugby on the BBC is to mute the sound and listen to 5Live on your DAB radio, no Jonathan Davies!,’ another added.”

He announced too on live television before an international rugby game, that the referee was French so “anything could happen”.

The famous fashion designer David Emanuel declared on Twitter in 2018:  “Surely, there HAS to be another Welsh RugbyCommentator instead of Jonathan Davies??? Irritating.  TalksTooMuch. Tired. WakeUpPlease!!@BBCSport @BBCCymruWales”, with key words ‘hashtagged’.

But Mr Davies has long been a headline-grabbing figure, and rugby has not always been at the heart of events.

He was also accused on social media of being ‘misleading’, publishing ‘rubbish’ and ‘ranting’, after stating that controversial plans to re-develop a Cardiff cancer hospital would leave 60 per cent of a meadow available to walkers when campaigners say surveys have indicated all will be destroyed, it has emerged.

Contradicting Mr Davies, one campaigner declared about the project to re-develop Velindre Hospital: “The whole area will be bulldozed, £27 million of public money just to access this unsuitable site…”

Mr Davies (who’s nickname is ‘Jiffy’) is President of Velindre Fundraising and demanded of one of the campaigners:  “Have you or anyone close to you ever been unfortunate enough to have cancer?”

Warnings were repeated too about the hazards involved in the misuse of fire extinguishers after experts were shown shocking pictures from a video of Mr Davies using one to spray into the face of former international referee, Nigel Owens, as he sat in his car while another person filming the dangerous stunt laughed.

The escapade in the car park of an independent TV facilities house near BBC Cymru Wales (BBC CW) in Llandaff, Cardiff, in 2014 was condemned as “incredibly dangerous”, and it prompted a series of outraged comments at the time on a sports Facebook (FB) site.

In the clip now on YouTube, Mr Owens escapes from the car running, but Mr Davies uses the fire extinguisher again as the person filming it exclaims in Welsh “OH, NO!”, and Mr Owens then shouts “IDIOT!” at him pointing.

After stills were displayed from the film shot six years ago, South Wales Fire and Rescue Service issued its stern warning about the misuse of fire extinguishers.

The spokesperson joined a chorus of more recent disapproval about Mr Davies who has faced huge criticism following statements which have included calling an MP in Wales a “knob”.

Mr Davies took to Twitter himself to post a fake picture of one critic, a well-known Welsh rugby fan, wearing a Pontypridd RFC shirt but he was then slammed for “essentially fat shaming someone because they disagree with them”, and the observer linked the comment to @BBCSport @BBCNews 5liveSport and @BBCWalesNews, saying they should be “embarrassed”, and that it was a “Dick move”.

Earlier the fury of Mr Davies had too been directed at journalist Marcus Stead who had criticised what he views as the Welsh establishment.

But it seems his present commentary style is not so great, according to rugby fans who say he is “shit”…

Our Editor Phil Parry’s memories of his astonishing 37-year award-winning career in journalism (including looking into the backgrounds of famous figures) as he was gripped by the rare disabling condition Hereditary Spastic Paraplegia (HSP), have been released in a major book ‘A GOOD STORY’. Order the book now!