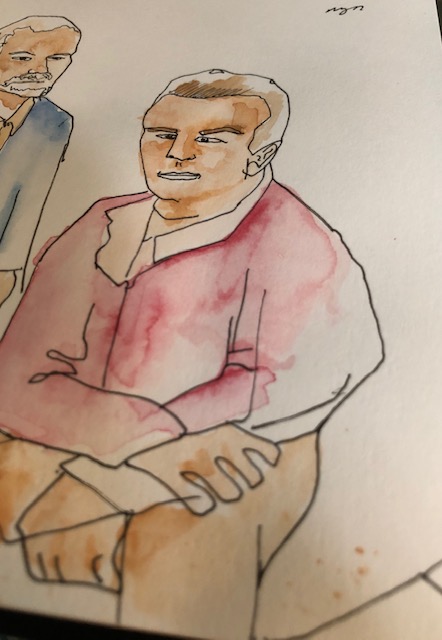 Edwin Phillips reads a new script for the satirical BBC show ‘W1A’ after The Eye reported criticism from inside the corporation as well as former employees that ‘Radio’ had been changed to ‘Sounds’, that a key TV Current Affairs programme had been scrapped, and the latest audience figures show Radio Wales has reached its lowest ever level.

RHODRI TALFAN DAVIES (DIRECTOR OF BBC CYMRU WALES) (RTD):  As a marketing expert I know how vital it was to change ‘BBC Radio’ to ‘BBC Sounds’ on our website.

COLIN PATERSON (EDITOR OF RADIO WALES) CP:  That is so true sir.

RTD:  Just as scrapping that debate programme ‘The Hour’ after a whole year was absolutely correct.

CP:  Everything you say is right your greatness.

RTD:  Week In, Week Out (WIWO) is another one – a run of 53 years was, er, just too long and I was right to get rid of it when I replaced it with the label on occasional programmes ‘BBC Wales Investigates’.

You have to show leadership when old presenters shoot at you with their musket balls.

It means nothing that this man Flynn had presented a daily programme on your Radio Wales for, er, 11 years and Wikipedia described him as one of the main presenters for the first decade.

CP:  Everyone says you are a brilliant leader and always make the correct decisions, your gloriousness.

(Coughing) it was just unfortunate that WIWO got that BAFTA Wales award thing after we had dumped it.

Anyway my background is in marketing so I know the importance of ploughing on with, er, changing the brand.

RTD: (Coughs) erm.  Quite.  WILL YOU STOP KNEELING!

And, er, we have done important things in the past here at BBC Wales by changing ‘Personnel’ to ‘People’ and altering ‘Canteen’ to ‘Restaurant’.

CP:  Those measures had to be taken your highness.

RTD: (Puts hand in inside jacket pocket and looks into far distance) and we won’t stop there, oh no!

CP:  You are so full of energy your eminence.  I bow.

And it was also right to celebrate our 40th birthday of Radio Wales after those, um, fantastic audience figures.

As you know, I have to ignore criticism from, er, the people who pay our wages, and as a brand expert I, er, know best.

BRAND EXPERT (BE):  Excuse me, I couldn’t help overhearing.

I have spent my career in marketing and I know that getting rid of a brand is extremely dangerous.

All the literature points to the importance of reforming something if you are unhappy, rather than starting with something new – because the brand is established in people’s minds.

The central role of the brand is stressed by John Williams in The Basics of Branding. He writes:  “Branding is one of the most important aspects of any business, large or small, retail or B2B.  An effective brand strategy gives you a major edge in increasingly competitive markets”.

In a 2007 survey of global brands by the branding agency Interbrand, the brand equity of Coca-Cola was valued at $65.3 billion, just under half the company’s market value. In the same year the TV chef Gordon Ramsay realised the strength of his name as a brand and allowed it to be used in a major advertising campaign by Gordon’s Gin.

The Design Council states:  “Branding is a way of clearly highlighting what makes your offer different to, and more desirable than, anyone else’s.  Effective branding elevates a product or organisation from being just one commodity amongst many identical commodities, to become something with a unique character and promise”.

In Strategy, Marketing and Technology Solutions it headlines:  “YOUR BRAND HELPS SET YOU APART FROM THE COMPETITION”.

I see that a business expert has also commented to The Eye on the recent BBC alterations saying:  “It is extremely dangerous to get rid of an established brand. Many of our customers are idiots and tell us they want to dump a long-established brand to set up a new one. We have to tell them it is complete madness”.

RTD turns to CP coughing once more:  Er, what does he know?

Tomorrow – why split loyalties are a problem for WalesOnline as it publishes reports of a court case concerning Coyote Ugly while promoting ‘stories’ of the nightclub’s ‘girls’.