Our satirical writer Edwin Phillips reads a media release from the BBC, following news there will be sweeping job cuts to save money, and amid revelations that a radio service is provided in Wales hardly anyone listens to, with the man in charge of it operating a failed policy of hiring expensive ‘celebrities’ while he conducted a controversial affair with a married presenter. Yet he has moved up the ladder at the contentious corporation.

TO: ALL REGIONAL STAFF EDITORIAL (ARSE)

Time: Before Anyone Cottons On

It is with enormous pride that the BBC can emphasise the great success of the corporation’s employment policy.

Our esteemed Head of BBC Radio Wales (RW) and BBC Wales Sport, Colin Paterson, is now Head of BBC Audio for Wales and the West of England, where he will run (among many other programmes), Any Questions?, Farming Today and Composer Of The Week.

This goes to show what a terrific success Colin has been, and the recognition by senior BBC personnel, of his amazing triumphs.

The audience figures speak for themselves, although evidently some people cannot see this, because in the first quarter of 2022, there was a 10 per cent drop in the number of hours people tuned in to Colin’s station, and RW had a weekly ‘reach’ of 314,000, which was a drop of seven points.

Unfortunately, these statistics compare with a weekly ‘reach’ in the same quarter for BBC Radio Scotland (RS) of 877,000, while the equivalent figures for BBC Radio Ulster (RU) were of no drop in listening hours, and a ‘reach’ of 34,000, which was actually an INCREASE of three per cent.

Yet these figures come hard on the heels of other recent difficulties for our man, and these, too, are to be regretted.

The quarter ending December 2021, sadly marked RW down from 5.9 to 5.3 per cent, as a share of the available Welsh audience, and showed that nearly 95 per cent of people in Wales ignore us completely.

We at BBC Cymru Wales (BBC CW) deplore the fact that other radio stations in the UK (as also shown in the latest RAJARs) attracted a far greater audience share, and that they have revealed the total listening hours were 2,667,000, down from 3,074,000 in September 2019.

Past years have been almost as much of a challenge for Colin as well, but he has risen to it exceptionally well.

One of the main presenters at RW during its launch is an enormous fan of Colin’s, although he has re-stated his call for him, and his superior, Rhodri Talfan Davies, to resign.

Mike Flynn told The Eye:  “Both of these so called media executives (Mr Davies and Mr Paterson) are answerable to the public who pay their salaries via the licence fee and should resign. But they are frightened to reveal the audience for the abysmal Claire Summers programme that replaced Good Morning Wales (GMW). I would like to know what the real figures are across daytimes and weekends and how they waste over £18 million. It is about time they started to answer a few questions.”

A former radio executive is also supportive of Colin, even though he has said at the time the previous quarter’s listening figures were released: “It’s (the audience numbers are) peaking at weekdays mid mornings, with Wynne Evans the only highlight. There’s an over reliance on celebrities who have little or no substance, and the breakfast programme is a disgrace. Paterson and Davies should go”.

The Eye’s Editor, Phil Parry, presented the lunchtime programme, Wales at One (which was scrapped in favour of a new show fronted by the former colleague of then Controller Menna Richards, Nicola Heywood-Thomas) the drive-time show Good Evening Wales, as well as the weekly debate series People’s Assembly, for seven years until 2006, and has unfortunately said publicly that this can’t go on.

It only goes to show Colin’s superb judgement that he had an affair with the married Lucy Owen, and the story about it, was included in a Digital Spy (DS) comment concerning RW with the message above the link saying joyfully “…the record low listening figures at Radio Wales under it’s (sic) current management (were) amplified this year by criticism from former award winning reporters and presenters”.

But it seems that for many staff at BBC CW, Coln’s romance with Mrs Owen represented a major potential conflict of interest, because our officials had commissioned a RW programme she hosted, called ‘Sunday morning with Lucy Owen’, and media executives both inside as well as outside the corporation have apparently told The Eye, that they were worried about their partnership’s possible impact on the process.

Yet it is clear that Colin chose well, despite the fact that when his former paramour, Mrs Owen, was newsreading on BBC Wales Today (WT), programme-makers regrettably used a picture of Brighton Pavilion during coverage of the start of the hugely-important Muslim month of Ramadan instead of a mosque, and the mistake was then featured in the Brighton Argus.

It is also obvious that Colin’s policy of celebrity-driven programming has been a roaring success, although other recent events have been less so. 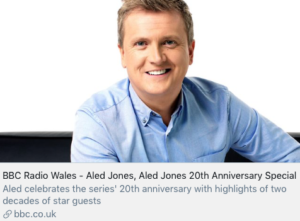 After The Eye reported several years ago that angry listeners had contacted them once it emerged the show of singing star and broadcaster Aled Jones was suddenly dropped from the airwaves with RW, came news of a very different sort, which was slightly unhelpful to the BBC.

On November 4 in 2017 it was disclosed how new schedules were about to be published, but the popular Sunday programme of Mr Jones (so wonderfully commissioned by Colin) did not appear. At the time we said, truthfully, that we did “make changes to when programmes run”.

Unhappily it was reported in UK newspapers, that the Songs of Praise presenter would not be on the airwaves at all with us, while we, quite properly, investigated alleged inappropriate behaviour more than a decade earlier.

We at the BBC applaud the fact that the singer and TV host from Anglesey, who found fame at the age of 12 with his top five Christmas hit Walking in the Air, said he was “deeply sorry” for any upset caused but strongly denied any “inappropriate contact”, and that a spokesman for Mr Jones said that while the matter did not relate to any broadcast work, he had voluntarily agreed not to go on the BBC while it was investigated.

In a statement, the spokesman rightly said: “Whilst he accepts that his (Mr Jones’) behaviour over a decade ago was occasionally juvenile, as was that of others, he never intended to harass or distress and he strongly denies any inappropriate contact. He is, however, deeply sorry for any upset caused and hopes this matter is resolved soon.”

Mr Jones’ spokesman said that the allegations from a single female complainant of inappropriate messages and contact, reported in the Sun, did not relate to any broadcast work, and related to a matter more than 10 years before.

This shows how Colin, and his celebrity policy, always makes the headlines.

As does him being appointed Head of BBC Audio for Wales and the West of England, despite overseeing a radio service which showed a 10 per cent drop in the number of hours people tuned in, gained a weekly ‘reach’ of only 314,000, and had an affair with a married presenter.

END OF A CAREER

The memories of Phil’s, astonishing 38 year award-winning career in journalism (including some of the stories he covered during 23 years at the BBC, among them his time at Radio Wales) as he was gripped by the rare neurological disabling condition, Hereditary Spastic Paraplegia (HSP), have been released in a major book ‘A GOOD STORY’. Order the book now!

Tomorrow – how during those years with the BBC, and long career in journalism, Phil always knew the importance of impartiality, but it has been thrown into sharp relief by news now that the UK Government announced a review of the corporation’s impartiality, as a huge row developed over the revelation that a controversial presenter was to be hired, before officials made a U-turn, and did NOT appoint him.