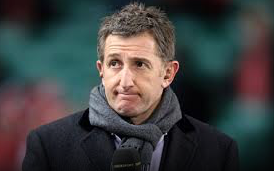 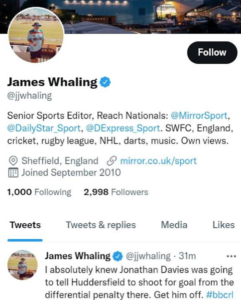 The controversial pundit and television chat show host, Jonathan ‘Jiffy‘ Davies, who was publicly condemned as “annoying as fuck” by a former professional rugby player, appointed the new coach for a top Welsh team, faced a barrage of criticism for his commentary style during the weekend’s rugby league final, including from a senior Editor with UK newspapers, it has emerged.

The sports Editor, James Whaling, who works for papers including The Mirror and Daily Star said on Twitter: “I absolutely knew Jonathan Davies was going to tell Huddersfield to shoot for goal from the differential penalty there.  Get him off. (Hashtag) bbcrl, during Saturday’s Challenge Cup match between the Huddersfield Giants and Wigan Warriors, which Wigan won 16 – 14.. 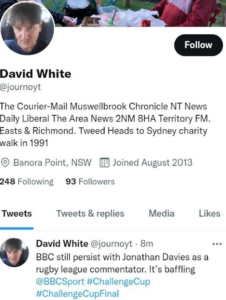 Another journalist, called David White tweeted:  “BBC still persist with Jonathan Davies as a rugby league commentator. It’s baffling @BBCSport (hashtag)ChallengeCup (hashtag)ChallengeCupFinal. In the past the writer Ben Nurse has also used Twitter to say: “The game has changed…”, but in response, Mr Davies said: “Ben is trying to make a name for himself.  Pathetic”. Mr Nurse was then forced to say ‘sorry’, declaring on the social media site: “I’d like to formally apologise for some of the words in my recent article”.

The extraordinary comments on Twitter where Mr Davies was described as “annoying as fuck”, were made by the rugby expert Nathan Bonner-Evans (who has been named forwards coach of Swansea RFC, and played for the Ospreys as well as Sale Sharks), following other highly critical remarks on the social media site.

During and after a recent rugby UNION game against France, he was described there as “dire”, that he can’t be ‘beared’, “makes this game unwatchable”, his “commentary is horrendous”, as well as one fan declaring: “I fucking hate Jonathan Davies”. Mr Davies’ commentary style has been compared unfavourably with that of another rugby international (England’s Brian Moore), when a viewer described Mr Moore’s departure from the airwaves as an “Appalling decision by the BBC”.

Mr Davies was called on Twitter a “moron” a “total disgrace”, “awful”, and a fan said he wanted to rip his ears off “every time (he) opens his mouth”. Another television viewer of the match said:  “@BBCSport can you please stop Jonathan Davies from having an input into ANY rugby commentary! It’s painful! I’ve had to turn the sound off and listen to Radio commentary of the game”. Before a previous game he said live on air:  “…the referee’s French, so anything could happen”. 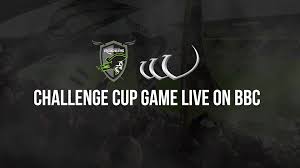 Earlier he had told a rugby fan on Twitter: “fuck you and your lads’ cock”. After seeing this tweet and comment by Mr Davies on YouTube, one sports fan told The Eye:  “He (Jonathan Davies) really is a disgusting individual”.

These are all set against an alarming backdrop because Mr Davies’ bosses at The BBC have also come under fire (as well as for no longer using Mr Moore), over controversies when neutrality was emphasised.

Earlier in the Challenge Cup tournament he had also faced huge online criticism during the Castleford v Leeds match, and was accused of being “Absolutely awful”.

Enormous protests on Twitter had greeted news of his original inclusion in the rugby league presentation team, with remarks such as: “Jonathan Davies ruins these games for me”. During the competition, there were complaints on social media about his mispronunciation of ‘Salford’, he was described as a “dipshit”, and one rugby league fan said “Why do we have 2 have Jonathan Davies on rl 4BBC” with a picture of an upset emoji after the comment. On this occasion a distraught supporter asked why sport executives could not have found someone: “more relevant than Jonathan Davies” with a further upset emoji following the remark. A different fan said Mr Davies “chats so much shite” while another said it was “Time to hang the mic up!”.

Mr Davies had, too, been accused of ‘ranting’, after stating on social media that controversial plans to re-develop a Cardiff cancer hospital would leave 60 per cent of a meadow available to walkers when campaigners say surveys have indicated all will be destroyed.

It is pretty clear, however, what the opinions are of a host of rugby fans, among them a leading sports journalist, who said: “Get him off”…