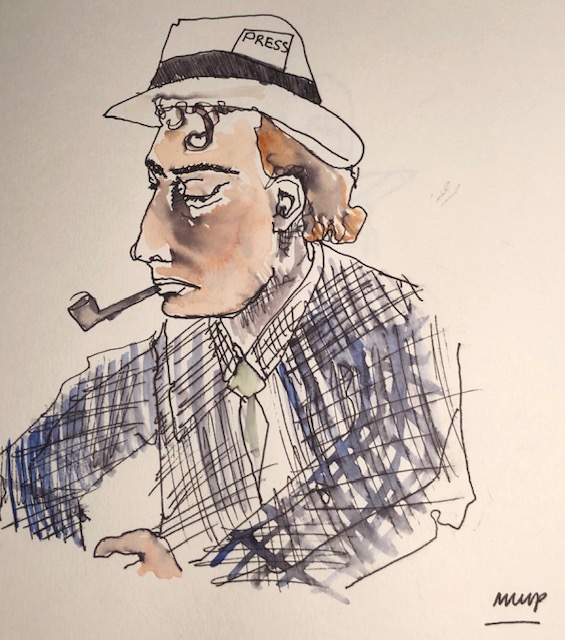 Here our Editor, Welshman Phil Parry looks at why during this time of year, news must still be given, and how even on Christmas day it was reported a dog had started a fire, as well as that the death toll was mounting in the terrible snow storms to hit America.

Earlier he described how he was helped to break into the South Wales Echo office car when he was a cub reporter, recalled his early career as a journalist, the importance of experience in the job, and made clear that court cases are central to any media operation.

News never has a holiday, and some unfortunate individual has to report it.

After 39 years in journalism, this clichéd fact has always held true for me, and it has been put centre stage by awful events today.

On Christmas morning it was reported how Essex Fire Service had been called to Hockley the previous day to find a smouldering blaze in a bedroom, and that it was believed the pet dog had jumped on a bed turning the hairdryer on, eventually causing it to set the mattress on fire. Luckily nobody died.

Some victims of a huge snow storm in America were not so fortunate, however, and this too, was reported on Christmas day.

Dozens of people died there as blizzard conditions left almost 300,000 homes and businesses without power, with temperatures plunging to well below freezing.

More than 3,000 flights were cancelled on Christmas Eve, and many airports were closed. Icy conditions on the roads prompted authorities to warn against non-essential travel, and hundreds of people who did venture out found themselves stranded in their vehicles.

Among those who died were three people in car crashes in Kentucky, and another three in Oklahoma, two of which happened as winds blew drifting snow. In Nebraska there was another weather-related vehicle death, while in Missouri, a man died after losing control of his vehicle on an icy road, going down an embankment, over a cement wall and landing upside down in a creek. In New York, meanwhile, there were a further four deaths.

In Montana, the National Weather Service warned that the eastern slope of Glacier National Park and nearby foothills, saw up to 20.3 centimetres of snow, along with winds of almost 90 miles per hour.

I can picture the scene now as these dreadful incidents were explained – a solitary reporter sitting in an almost-deserted news room checking details through the ‘calls’ to emergency services, or on news ‘wires’! Rounds of ‘calls’ must be made by a reporter to emergency services in the patch, to find out what is going on.

Last year was no different.

Desmond Tutu, who was at the Oasis Frail Care Centre in Cape Town, died on Boxing Day 2021 at the age of 90.

This tragic episode reminded me of how as a very inexperienced 21 year old trainee reporter on the South Wales Echo (SWE), I was tasked by my News Editor Stuart ‘Minto’ Minton, with the job of ringing up the wife of a seriously-ill Welsh celebrity, to find out how he was.  In reality it was to discover if he had died yet, so that we could run an ‘obit’!

When I started in journalism, the ‘calls’ were usually done on the phone, but now a lot of them are made using the internet.

These ‘calls’ consist of contacting the police, ambulance service (now just one in Wales) and fire brigades (more) every few hours to see what, if anything, is happening and they are usually automated today.

During one Christmas on the SWE (then the biggest-selling paper produced in Wales), in the early 1980s I had to do the ‘calls’ in an empty newsroom, and I also did them (although from home) at the Cardiff freelance agency I then worked on, Cambrian News Agency.

I’m afraid that quite a lot happens during the Christmas and New Year holidays for reporters. Houses get burnt down because the meal goes badly wrong, and with the thought of most people at home alongside their families there are, I’m sorry to say, a number of suicides by those who have no-one. Relatives are also thrown together in an oppressive atmosphere, pretending to be cheerful, so there are plenty of drink-fuelled fights, and even murders!

It is a staple story to ring up the Samaritans in the New Year, for the latest figures. Their website proclaims, after all: ‘This winter will be as busy as ever. Over the 2021 festive period, Samaritans responded to over 244,254 calls for help in the UK and the Republic of Ireland’.

I apologise for bringing up these details now, but someone has to report this kind of news, and they do not stop over Christmas and New Year! Many of these ghastly stories are first picked up by that solitary reporter doing the ‘calls’.

I feel for the poor people who have to do them now in news organisations!

Once when I did the calls I was party to the black humour which seems to persist with the police.

A sergeant at a Welsh police force, picked up the phone when I rang (it’s all centralised now) and told me about an apparent suicide at a beauty spot in South Wales when a man had driven his car off a cliff. Sadly, suicides on Welsh cliffs happen all too often during a festive period, and another police officer told me that people who wanted to take their own lives would, bizarrely, lock their cars before jumping to their deaths. This time though, the man had stayed in his car before driving it over the edge.

“He’s dead”, the officer said. I cleared my throat and desperately tried not to sound shocked. We were never allowed to say someone had died until we were given the news officially by the hospital.

I also tried to sound older than my years. “Um, how can you be so sure?“, I asked, my voice wavering.

“Well,” he answered stifling a laugh, “his body is in the front and his head is in the back”…

Phil’s memories of his extraordinary 39-year award-winning career in journalism (when ‘calls’ were central) as he was gripped by the incurable disabling condition Hereditary Spastic Paraplegia (HSP), have been released in a major book ‘A GOOD STORY’. Order it now!