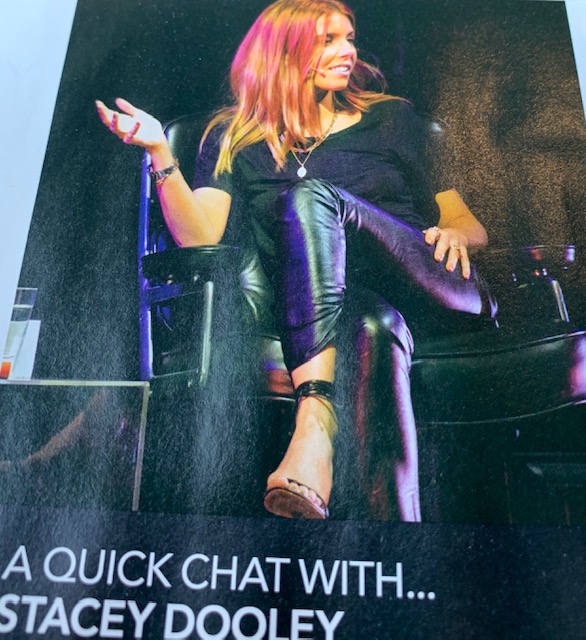 As he discloses why investigative journalism is needed now more than ever, here he shows why others appear to have a different view.

Certain approaches to journalism are intriguing.

Stacey Dooley is featured in the What’s On guide of Cardiff Life lounging in a chair wearing leather trousers and talking about ‘career’ highlights, before her appearance this month in ‘Conversations with Stacey Dooley’ at Cardiff’s St David’s Hall.

She was asked difficult questions in the magazine such as:  “What is your fondest memory of Strictly Come Dancing?”.

The publicity put out by St David’s Hall declared:  “Join her (Ms Dooley) for what promises to be a thought-provoking, inspiring and informative evening. With a chance to try your own hand at journalism and ask Stacey the questions, this is an opportunity not to be missed“.

The investigative journalism we pursue on The Eye is also apparently something Ms Dooley is an expert on.

The St David’s Hall publicity before her appearance proudly proclaims:“… Stacey talks about her remarkable career so far, where she’s headed next, and how news and investigative journalism are evolving in such a highly polarised global political climate and a constantly shifting media landscape”.

But she didn’t include one ‘career highlight’ being when she was called “lazy” and “insensitive” by a disadvantaged family that she had staged staying with in one of her films ‘Stacey Dooley Sleeps Over’.

Another ‘highlight’ which she was also silent about was how the BBC had to apologise and edit out her incorrect commentary in a Panorama programme which professed to portray the truth about Islamic State’s (IS) treatment of women.

Ms Dooley it seems has advertised the fact that she believes not being a trained journalist is a positive advantage.

But real journalism is not ‘lazy’, even so, others like Ms Dooley have other views.

Paul Rowland, another so-called journalist in a senior position, gave interesting advice to a person anxious to break into the trade.

Mr Rowland is the Editor of WalesOnline (who threatened to sue me over a satirical piece), and wrote on his website to a reader:  “You might not be interested in ’19 mouth watering street food dishes and where to find them in Wales’, and you might believe it’s not something we should be writing (I wouldn’t agree, but that’s fine). That doesn’t mean it’s clickbait”.

Ms Dooley meanwhile does not seem to engage in ‘clickbait’ journalism, but you have to wonder how qualified she, like Mr Rowland, is in offering guidance.

One of her subjects in ‘Stacey Dooley Sleeps Over’, Adele Allen, said: “In the whole 72 hours she was here I did three early morning dog walks at 6am with the baby and she didn’t manage to make it out to one. She couldn’t get up with me – so there’s the lazy one”. She and her partner Matt claimed that Ms Dooley didn’t join in enough with their family life in Brighton on the show.

Matt said: “She’s lovely but there’s not a lot of depth to her. There’s a fantastic moment (in the programme) where she is with me in the allotment and I say: ‘Come on then Stacey, what herb is this?’ and I tell her it begins with the letter O and she says: ‘Olive oil’”.

BBC officials too have apparently found it hard dealing with the aftermath of Ms Dooley’s engagement in ‘journalism’.

After presenting ‘Blood, Sweat and T-shirts’ (which ‘investigated’ the working conditions of Indian sweatshops), Ms Dooley received a call asking her to appear on BBC Newsnight to discuss her experience and told a magazine tellingly: “I didn’t even know what Newsnight was”.

A few weeks before ‘Stacey Dooley Sleeps Over’ The BBC had to apologise and edit out her inaccurate commentary in a Panorama programme which claimed to portray the truth about Islamic State’s (IS) treatment of women.

The programme was called ‘Stacey Meets the IS Brides’ and Ms Dooley’s voice over had said: “We saw women raising their index finger in an IS salute”.

But this was completely wrong and several viewers who had seen the trailer about it, criticised Ms Dooley’s comment on Twitter, explaining that Muslims often use this gesture while praying.

Perhaps Cardiff’s St David’s Hall should instead stage an evening of Ms Dooley’s mistakes, or even Mr Rowland’s ‘career highlights’, after he informed one reader keen to become a journalist to write about street food in Wales…

Phil’s memories of his astonishing lengthy award-winning career in another kind of journalism as he was gripped by the incurable disabling condition Hereditary Spastic Paraplegia (HSP), have been released in a major new book ‘A GOOD STORY’. Order the book now!