After 23 years with The BBC, and 38 years in journalism (when he was trained to use clear and simple language, avoiding jargon), our Editor Phil Parry knows that the audience believes some people on the airwaves do not age, when major documentary programmes have focused on one of the biggest and most controversial murder investigations ever mounted by South Wales Police (SWP), during which four members of the same family were brutally killed, featuring footage of him decades earlier!

A fascinating aspect about having been on television, is that onlookers think some people don’t change!

They certainly don’t with me (although I have done MASSIVELY), and one viewer even came up to me recently saying bluntly:  “God you’ve aged!”.

This was emphasised by Sky documentary films on now, called ‘Murder in the Valleys’ (MITV), which re-examine a notorious murder case in Clydach near Swansea, in which two children, their mother and elderly disabled grandmother, were battered to death in 1999. 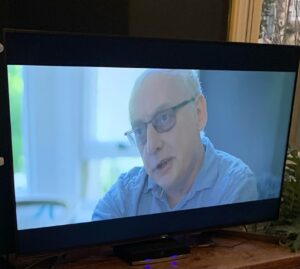 It was one of the biggest, and most controversial, investigations ever mounted by South Wales Police (SWP), and there have been lingering doubts concerning the guilt of the man who was eventually convicted for them, David (‘Dai’) Morris.

I made a BBC Panorama about the case 20 years ago, and we were the first to question the conviction. Film-makers relied on that Panorama heavily for the four part Sky series on it, which is being transmitted at the moment.

In MITV I am seen as I was then, engaged in secret filming, and as I am now talking about what happened all those years ago.

Of course I was seen on one of the programmes, as I am today – wearing glasses, with thinning grey hair, and a lined face. I am also disabled, and walk with a stick, although this wasn’t on screen.

I am shown, too, as I was 20 years ago – an able-bodied man in his 40s, without glasses, and a shock of dark blond hair.

Some, though, are different.

Among them is the Senior Investigating Officer who was in charge of the case at the time, Detective Superintendent (Retd.) Marti(y)n Lloyd Evans.

He was a good-looking, youngish, man then, and remains a handsome, mature person, now.

But we didn’t even bother approaching him for an interview in our original BBC Panorama, because we knew he’d say ‘no’.  In fact SWP refused altogether to do a formal interview for us!

I used to spend most of my time, when I was in television, not engaged in journalistic pursuits at all, but in persuading people to go on camera.  It is MUCH easier when they are retired!

However, despite his looks, Mr Evans (who used to drive around in a car with the personalised number plate ‘MLE’) does not come over well on MITV.

A highly credible witness saw someone wearing a black bomber jacket which looked like a police coat, near the murder scene in the small hours of the night in question, and gave a statement to officers, from which an ‘e-fit’ was constructed. The police report which was shown in the MITV documentary films (as well as in my BBC Panorama programme), said it had a ’90 per cent’ chance of likeness.

The witness studied the man closely, and he looked directly back at her. This e-fit, however, was NEVER released to the public.

During MITV, Mr Evans is questioned about this seeming mistake, and he replies that because the man was carrying a bag, and it was believed the killer had not had one it was not put out.

He said: “I didn’t think it was relevant”. I thought this was bizarre in the extreme.

The e-fit matched almost exactly the face of the first senior police officer on the scene, Inspector Stuart Lewis, who had stayed there a matter of minutes, or his identical twin brother (another police officer, Sergeant Stephen Lewis, whose wife was having a gay affair with one of the victims).

Inspector Stuart Lewis, had changed his shift to be on that night, yet at crucial hours during the murders his whereabouts are unknown. He drove an unmarked police car which was similar to one spotted nearby, but with a log book which went missing, and he didn’t report the deaths as suspicious, even though he was known for meticulously playing by the book, and was called by his colleagues ‘Inspector Perfect’.

I am shown in one of the programmes confronting him with the e-fit during the secret filming, and saying:  “Now that is a very good likeness of Stephen, your twin brother or YOU…”

What was NOT transmitted, though, was that Inspector Stuart Lewis then said, flustered: “OR Morris”, to which I responded: “It doesn’t look like Morris to me…”

My producer, Stephen Scott, asked: “Why weren’t you put on an identity parade?”, and Inspector Stuart Lewis replied, still flustered, that he should have been.

It is intriguing that in the statement transmitted by MITV programme-makers, he appeared to concentrate on himself, and how he had been unfairly treated by SWP in their botched Perverting The Course Of Justice case against him, but he might, perhaps, have been expected to name those who had been so terribly murdered.

His proclamation began:  “It is tragic that all involved in this high profile investigation were let down by the police…”.

Meanwhile, in his interview for MITV Mr Evans said:  “David Morris was never a victim”, but if those who watched it had substituted the words ‘Stuart Lewis’ for ‘David Morris’, this declaration could have worked just as well!

Quite apart from not releasing the e-fit which so closely resembled Mr Lewis, or his identical twin brother, other stupid (although rather less important) errors were also made.

During the interview for MITV, Mr Evans used the word “sublime”, but clearly meant “subdued”!

This reminded me of when I talked to a senior police officer, many years ago as a cub reporter, and he managed to conflate the words “insinuate” and “innuendos”, saying magnificently:  “Now don’t you be giving me any of your insinuendos”!

That said, the MITV programmes are EXCELLENT, and should be watched. They were on SKY Crime and SKY Showcase on Sunday; with all four episodes available as a ‘box-set’ on NOW TV, and it has been written about extensively.

It’s just a shame that some people have aged better than others..!

The memories of Phil’s decades long award-winning career in journalism (when secret filming was used regularly in investigations) as he was gripped by the rare neurological disease Hereditary Spastic Paraplegia (HSP), have been released in a major book ‘A GOOD STORY’. Order it now!