Amid sham referendums in Russian-controlled Ukraine, and after it was reported that Ukrainian forces had retaken territory “half the size of Wales”, here our Editor, Welshman Phil Parry looks at how tired old clichés are always used to describe sizes, and Wales often bears the brunt!

Earlier he examined how he was assisted in breaking into the South Wales Echo office car when he was a cub reporter, recalled his early career as a journalist, the importance of experience in the job, and made clear that the ‘calls’ to emergency services as well as court cases are central to any media operation.

He has disclosed as well why investigative journalism is needed now more than ever although others have different opinions, how the coronavirus (Covid-19) lockdown  played havoc with media schedules, and the importance of the hugely lower average age of some political leaders compared with when he started reporting.

In explaining the enormous amount of territory retaken by the Ukrainian army, as they have expelled invading Russian forces, the lazy cliché of comparing it to the size of Wales has been reached for, in order to paint a half-accurate picture for the audience.

Sky News reported: “Russia is likely to continue its surprise retreat from large sections of Ukraine until Kyiv’s troops recapture an area nearly half the size of Wales, according to Western officials”.

This occurs ALL THE TIME, and Welsh people (like me) are entitled to feel a little aggrieved. 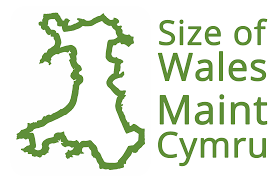 Usually this overused expression is grasped as an unthinking way of portraying the amount of rainforest which is being lost, and in fact, there is even an organisation which marks the fact.

The environmental group ‘Size of Wales/Maint Cymru’, aims to raise awareness about climate change, and the importance of protecting the natural world by visiting schools across Wales.

Former Director Elspeth Jones said: “‘An area the size of Wales’ is frequently used to measure the rate of forest destruction. Our founders wanted to turn that negative use of the country’s size on its head and make it a measure of something positive.

“It’s almost impossible to imagine how big two million hectares is without a reference point. Using ‘the size of Wales’ helps to illustrate the scale.”

But it isn’t only the rainforest and territory in Ukraine – the phrase ‘the size of Wales‘ is also used to describe other phenomena.

It’s been wheeled out to represent the area an asteroid could wipe out if it hit the Earth, and how much damage a nuclear bomb might cause.

There are things apart from these too!

Swansea University’s (SU) Professor Adrian Luckman leads Project Midas, which has monitored iceberg A-68 since it broke away from the Larsen C ice shelf in Antarctica in 2017, and needed a way to put the size of the trillion-tonne iceberg into context so that the average person could comprehend it, and turned to the words.

A BBC report at the time read: “The giant block is estimated to cover an area of roughly 6,000 sq km; that’s about a quarter the size of Wales”.

So when did this all start?

Google’s Ngram Viewer (which allows you to search words or phrases, working out how often they have been mentioned in millions of words in books dating back hundreds of years) suggests it has been around for a while.

But, it seems, even today it remains a handy way to explain the huge amount of land that has been seized back by Ukraine as it stands up to Russia.

The memories of Phil’s decades long award-winning career in journalism (when units of measurement were different to just being ‘the size of Wales’) as he was gripped by the rare neurological condition, Hereditary Spastic Paraplegia (HSP), have been released in a major book ‘A GOOD STORY’. Order it now!

Tomorrow – why the biggest airport in Wales, which was bought using taxpayers’ money for £52 million, when a Scottish equivalent was purchased for £1, claims it’s on track to hit a target of 50 per cent of pre-pandemic passenger numbers, but experts have warned that it starts from a very low base as the worst performing one in the UK, and it still faces possible closure.