After 23 years with BBC Cymru Wales (BBC CW), and 38 years in journalism, here our Editor Phil Parry looks at one aspect that has always governed his long career: GETTING A GOOD STORY!

It has been the same everywhere I have been.

When I was training to be a journalist in 1983; as a reporter on the South Wales Echo (SWE); working at a Cardiff freelance agency; doing shifts for ITV, and on UK newspapers; as well as reporting for BBC Cymru Wales Today (WT); or presenting the doomed BBC Cymru Wales (BBC CW) Current Affairs programme Week In, Week Out (WIWO), before moving into radio, I was always told by those in charge:

‘YOU MUST FIND A GOOD STORY!’

I am glad to say those News Editors (now known as ‘Content Editors’) would be pleased, because what follows is an INCREDIBLE ONE.

Journalists are rarely the subject of the story themselves – but in this case I am, so it has been hard for me to put perspective on it.

However I have been urged by my journalist friends that this needs to be told, so here it is:

As anybody who knows me will realise (I have written extensively about it), I do not walk properly now because I have Hereditary Spastic Paraplegia (HSP).

This is an incurable neurological condition, and I was diagnosed (after a battery of tests) almost exactly 10 years ago.

The version I have (which is fairly mild) affects nerves controlling leg movement, and it is possessed from birth (as the name suggests), although I only became aware of it in my 40s.

I walk with a stick today, and in a few years it is possible that I will be in a wheelchair.

It is also EXTREMELY rare, so you are unlikely to meet someone who suffers from it.

Two years ago I was drinking a cup of coffee in Starbucks in the centre of Cardiff, when a middle-aged man approached me and said: “You walk just like me, but I don’t know what I have.   I have seen my doctor and had a test, but it is negative so no one knows what it is”.

I told him I had HSP, and advised him to get himself checked out for this.

Last week I happened to be spotted by this man again, once more in Starbucks.

He introduced himself as a photographer called Mark Orchard, and said that he was extremely grateful for meeting me all those years ago. 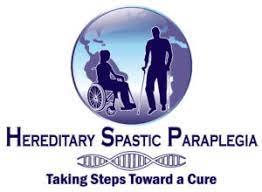 After our chance meeting once more last week, he put the remarkable incident on his website.

This is what he wrote:  “I originally met Phil in Starbucks, on The Hayes, in 2019. I had recently been discharged from University Hospital of Wales (UHW) with amnesia following a sudden and inexplicable collapse.

“I had a strange physical condition and suddenly I saw Phil with the same dysfunctional gait.

“I gingerly approached him in order to enquire as to what his condition was, whilst being a little reticent as I realised this was a fairly impertinent approach about such a personal issue.

“He told me, quite openly, that it was ‘Hereditary Spastic Paraplegia’. I had just had a negative test result for Huntington’s Disease. I was referred on to the All Wales Genetics Institute in UHW also.

“The test was positive for HSP (complicated SPG7). A relief after 55 years. And it was pretty much down to Phil’s information and the coincidental meeting in Starbucks that day that the diagnosis was made.

“I had not expected to meet him again. What a surprise then to see him yesterday. I am so grateful to Phil.

“It has thrown a light onto many incidents/events/struggles throughout my life. Clearly my mother had it, but with separate cardiologists, neurologists etc it was never viewed as a single condition sadly. She was only ever treated for individual morbidities.

“What is more amazing is that I took his picture, uploaded it to Instagram/Facebook and it turns out we have mutual friends”.

As Mr Orchard described it on his website, and I can testify, what happened that day was clearly an unbelievable story.

It was better, in fact, than most of the other ones I have told during my career!

Tomorrow – Phil’s own tribute on Remembrance Day, to those who have fallen in war.

The memories of his decades long award-winning career in journalism (which includes some of the stories he has covered, which are almost as good as this one) as he was gripped by the disease Mr Orchard now knows he has, have been released in the book ‘A GOOD STORY’. Order it now!