Here our Editor Phil Parry looks at the way the mainstream media in Wales have ‘reported’ a major story which has made headlines across the UK.

The death of a young man hours after he was released by the police is a terrible tragedy, but the coverage of it in the mainstream Welsh media has also been a disaster.

There was no mention in reports that people had apparently flouted lockdown rules as they protested against what they claimed was an assault in custody, or whether there was an exemption and what the reason might have been for one.

Breaching these rules, however, is the dominant issue in UK news reports at the moment, amid cruicial government advice on this important subject, and a soaring death rate caused by coronavirus/Covid-19.

It was not included at all in ‘reports’ on the demonstration about what happened to 24 year-old Mohamud Mohammed Hassan in the BBC Cymru Wales (BBC CW) flagship evening TV news programme Wales Today (WT) on which I worked for two years.

One senior journalist at BBC CW told me:  “This was shallow journalism.  Mentioning the social distancing rules is basic stuff”.

But WT has failed to cover itself in glory before.

Programme-makers used a picture of Brighton Pavilion during coverage of the start of the extremely important Muslim month of Ramadan instead of a mosque, and the mistake was then featured in the Brighton Argus.

“Our thoughts must be with the family of a young man who was… a fit and healthy individual,” the Cardiff West MS said. 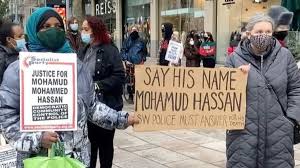 The website WalesOnline also didn’t refer to the apparent transgression of social distancing rules in its report.

It was published that:  “Hundreds of people protested outside Cardiff Bay police station tonight following the death of Mohamud Mohammed Hassan, after he was released from police custody”.

This was the report: “The First Minister has said he is deeply concerned by the death of 24-year-old Mohamud Mohammed Hassan, as hundreds joined in a protest headed for Cardiff Bay Police Station”.

But it was plain for all to see, and I had seen with my own eyes how these rules had been defied in the demonstration, because I was caught up in it when it reached Butetown.

Yet the advice from the UK and Welsh Governments is crystal clear that people should keep at least two metres apart during this unprecedented lockdown crisis.

This is the latest official guidance: “To reduce the risk of catching or spreading coronavirus, you should minimise time spent with people you do not live with, and when around other people ensure that you are two metres apart from anyone not in your household or support bubble.

This has all been exacerbated by another report earlier on the BBC CW website about renovation of Cyfarthfa Castle near Merthyr Tydfil which is being spearheaded by Geraint Talfan Davies, but doesn’t mention he is the father of the Director of BBC CW Rhodri Talfan Davies (see story soon on The Eye).

But BBC CW could, perhaps, have turned to its own UK website which reinforced the point about social distancing, and gave details of a survey which revealed that most were in fact following these stringent rules.

These rules seem clear enough, but so too is journalism being described as “shallow” when reporting a protest against a young man’s death a few hours after he was released from police custody, yet doesn’t mention the social distancing rules…

Phil’s astonishing decades-long award-winning career in journalism (which includes some of the REAL stories he covered during his years at BBC Cymru Wales) as he was gripped by the rare neurological disabling condition Hereditary Spastic Paraplegia (HSP), have been released in the major book ‘A GOOD STORY’. Order the book now!