Here our Editor Phil Parry looks at the foundations of independent news journalism – neutrality, and not accepting money from the state – when one controversial website which receives a huge taxpayer grant, said it was expanding.

There are a number of fundamental tenets of news journalism – among them impartiality, and not accepting money from an organisation you might later need to investigate.

However both rules are apparently being flouted by one ‘independent’ news website which supports the Welsh nationalist party Plaid Cymru (PC), and receives money from the taxpayer via the Books Council of Wales (BCW). 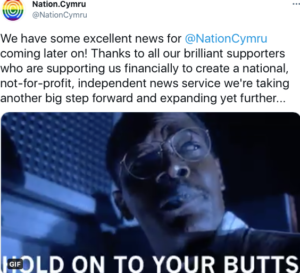 Yet the website in question (Nation.Cymru [NC]) has just announced it is expanding, and critics (among them myself) fear this may involve more public money.

It has proclaimed on Twitter: “We have some excellent news for @NationCymru coming later on! Thanks to all our brilliant supporters who are supporting us financially to create a national, not-for-profit, independent news service we’re taking another big step forward and expanding yet further…”.

I have been a journalist since 1983 but have never witnessed such a situation.

Despite NC receiving a substantial grant from the BCW, it clearly wants more cash, and the news that it is now ‘expanding’ throws these disturbing facts into stark relief.

The founder and former ‘Editor’ of NC, Ifan Morgan Jones (who teaches ‘journalism’ at contentious Bangor University) tweeted on Easter Day last year to Hollywood superstar Michael Sheen that any support for a ‘new service’ would be “gratefully received and the better the service will be”. In another tweet Dr Jones proclaimed that they had “already reached an audience of some 2m readers digitally”. The tweets asking for money were also sent to UndebPlaidCymru which declares it is “The official trade union section of Plaid Cymru”. In an earlier tweet, Mr Sheen asked about the cost and Dr Jones replied: “it’s very elastic – the more subscribers we have the more content we can produce”.

BCW is itself funded by the Welsh Government (WG) meaning the money NC receives comes from the public purse, yet, bizarrely, it claims to be “independent”!

But some readers of NC were deeply unimpressed by the request for more money from Mr Sheen, as well as, now, the news that it is ‘expanding’. One critic told The Eye earlier: “Why should Michael Sheen be interested in something like this anyway?”. Another said:  “What is this all about? We know Nation.Cymru backs Plaid Cymru, but does Michael Sheen understand a lot of people are angry that taxpayer money supports it?“. 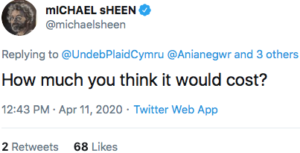 Apart from tapping a Hollywood star for money to supplement their public cash, before plans for expansion, Dr Jones’ journalism students may be uneasy, as well, about their teacher’s background. His CV states:  “I am the BA Journalism Course Leader at the School of Creative Studies and Media at Bangor University, and lecture on the subject of practical journalism”. However nowhere in the details is mentioned qualifications by the National Council for the Training of Journalists (NCTJ), the accepted body for formally accrediting journalists. Dr Jones may be quizzed too by his students about one of the basic planks of good news journalism being neutrality, especially when his website claims it serves all “the people of Wales” and is backed by the taxpayer.

It could be obvious to his students, that Dr Jones’ website supports PC, which is in opposition to the larger governing Welsh Labour party in the Senedd Cymru/Welsh Parliament (SC/WP), and that NC has also boosted the Welsh independence movement by saying, for example, “Support for Welsh independence has risen again”, because it was at 11 per cent whereas the previous year it was seven per cent.

NC’s lack of journalistic neutrality is shown, too, by the fact that it failed to cover the astonishing news that PC did not declare large amounts of money, but DID publish a piece about the UK Tory party showing it in an extremely bad light, and another prominent item saying “Conservative AM has accepted more free international rugby tickets than any other UK politician”.

Several readers of NC have said the site is “biased”. On the NC Facebook (FB) platform extremist comments have appeared, including one about burning down holiday homes, and it has been revealed that key workers property was targeted. One critical remark on NC’s FB platform was:  “It’s a biased online site for some of the people of Wales”. A further outraged announcement was: “If people are going to criticise one group they need to consider the actions of others, otherwise its called hypocrisy… we need to ensure all sides play by the rules”. 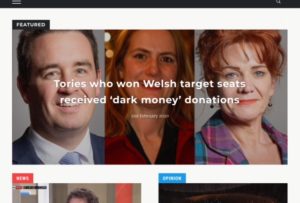 A lengthy ‘report’ about the Conservative Party on the website said:  “More than half of donations received by new Conservative MPs in Wales came from secretive fundraising clubs based in the south-east of England”. However the story that NC omitted to cover, but received huge media attention in other outlets, was that PC had been fined tens of thousands of pounds after not declaring money from public coffers. 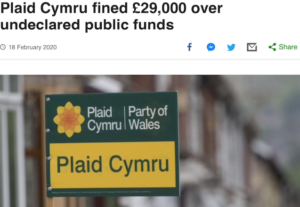 Dr Jones has attacked facts about him that have been raised on The Eye, but he should know as a lecturer in ‘journalism’, that everything published is supported by a raft of unseen evidence. In his ‘journalist’ lectures he presumably tells his students about the laws of libel as well as rules about accuracy, that all stories are governed by them, and that reporters have a large amount of evidence to back up each line.

On The Eye, journalists have many years of experience in journalism – I have more than 37 – and are very aware of what can and cannot be published.

Dr Jones himself put on FB last December a picture of a postal ballot paper, with his pen pointing at the PC candidate, and has posted a photograph of himself and his partner above the slogan “I’m voting Plaid Cymru”. In July 2016 he helped promote a rally for Welsh independence in Caernarfon and said that Wales:  “faced being part of a state which (is) being politically neglected”.

An opinion piece was published on NC in which he said:  “In an independent Wales (which the leader of PC Adam Price has described as a “necessity”), the future of our nation wouldn’t be decided by politicians completely removed from our concerns, like gods playing dice with our fate on the summit of Mount Olympus”.

Meanwhile Dr Jones’ website has been been put centre stage by earlier interesting headlines. He has stated about NC:  “Much of the current money we do have to spend is due to support through the kindness of the Welsh Books Council. But such public money is thin on the ground, and ideally, no news site should be dependent on grants that, in the current financial climate, may not last forever.” The BCW declares: “The Books Council of Wales is a national body, funded by the Welsh Government, which provides a focus for the publishing industry in Wales.”

Dr Jones has worked as Deputy Editor for the Welsh-language magazine Golwg, and as an Editor of the news website Golwg 360. It is evident that he sees NC as a great success, and that is shown, now, by its apparent ‘expansion’. He wrote earlier on the site: “… the success Nation.Cymru has enjoyed… was beyond my wildest dreams…”

Even so Dr Jones has said in the past that he is keen to receive more money for NC than just public cash, as his tweet to Mr Sheen makes transparent, and on his website he has urged readers: “If just everyone who had attended the Yes Cymru march (in support of Welsh independence) over the last year gave us £5 a month we would be raising over half a million pounds a year”.

In the same year a spokesman for the WG said funding for the BCW had been cut to £4.1 million, and added: “This funding is channelled towards supporting the publishing industry in both Welsh and English languages. Detailed monitoring arrangements are in place to ensure that this funding is spent appropriately. Book sales through the Welsh Books Council distribution centre saw an increase in the last financial year which is very encouraging given the current financial climate.”

Meanwhile the WG divulged that £750,000 of additional funding for the BCW would be invested in a new digital system to manage the sale, supply and distribution of books, and the BCW was also to receive additional capital funding of £145,000.

The then Deputy Minister for Culture, Sport and Tourism (formerly a leading figure in PC), Dafydd Elis-Thomas, said that he was “delighted” to support the BCW to invest in the publishing sector of the Welsh economy. “This (the original additional funding) will be a significant boost to the Books Council of Wales but also the whole publishing industry in Wales,” he said.

Perhaps there will be more ‘delight’ in the WG that NC is ‘expanding’ – so maybe they will need more public money!

The memories of Phil’s remarkable decades-long award-winning career in journalism (when neutrality and not accepting money from the state were paramount) as he was gripped by the rare disabling neurological condition Hereditary Spastic Paraplegia (HSP), have been released in a major book ‘A GOOD STORY’. Order the book now!