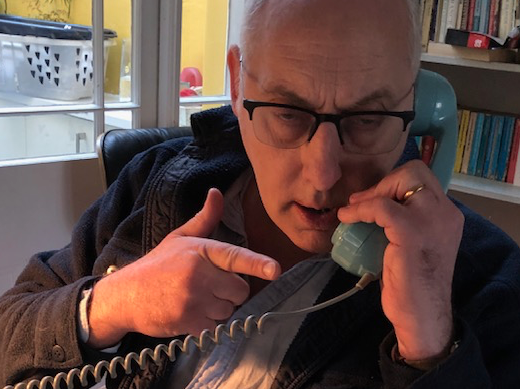 Here our Editor Phil Parry stresses the importance of reporting the daily news round up whatever its popularity, as a BBC Wales Today (WT) presenter publicly proclaims she wants to offer audiences “the news you want”.

It is vital to give audiences a record of the day’s events on the nightly news.

After a career of 23 years at BBC Cymru Wales (BBC CW) I know this salient fact better than most.

It is disconcerting, therefore, that the BBC Wales Today (WT) presenter Lucy Owen, tweeted about the latest round of audience research (there were many when I was there), and how it will enable them to give the stories that audiences desire.

Mrs Owen wrote on Twitter: “Getting great insight into what (Hashtag)BBCNews audiences want from our services with @anna_r_jones. Looking at where and how you get your news and the kinds of stories that are important to you. It’s all about @BBCWales doing our best to deliver the news you want. (Hashtag)news (Hashtag)publicservice” 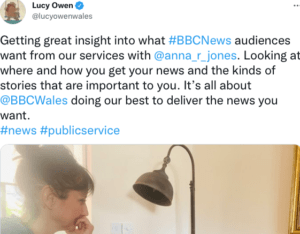 The phrase “…the news you want” is particularly worrying, when I have spent a journalistic career of many years, on occasions delivering news some people DIDN’T want!

It is also surely incumbent on a nightly television news programme to offer the day’s NEWS, whether it is wanted or not.

Presumably, a lot of stories are not actually very popular or attractive to audiences, such as gruesome court cases, rail strikes (which are extremely topical now), or terrible accidents, and the only ones left would be positive news items – such as those about abandoned pets being found homes.

But reporting so-called ‘stories’ about cute animals, is NOT the reason I came into journalism in 1983!

It is a little similar to ‘reporting’ stories with no analysis whatsoever, such as when the man in charge then of Welsh independence organisation YesCymru (YC), Sion Jobbins, was ‘interviewed’ by ITV Cymru Wales ‘reporter’ Ellie Pitt.

Her ‘report’ began:  “‘Westminster isn’t working for Wales’. These are the five words I have been hearing all week. Over the last few days I have had numerous conversations with recent joiners to the Welsh Independence group YesCymru.”

But the reality is that YC has been in complete turmoil over abusive comments which had been brewing for some time, as it was ripped apart by an extraordinary internal civil war between those in favour of trans rights, and those who were against them, and the ENTIRE committee resigned. Yet NOWHERE in the ‘story’ by Ms Pitt was this mentioned!

Mrs Owen has also been embroiled in controversy.

The head of BBC Radio Wales (RW) at the time, Colin Paterson had a contentious affair with her, despite the fact that his officials had commissioned a programme she fronted.

For many staff at BBC CW, Mr Paterson’s romance with Mrs Owen represented a major potential conflict of interest, because officials had authorised a RW programme she hosted, called ‘Sunday morning with Lucy Owen’, and media executives both inside as well as outside the corporation have told me, that they were worried about their partnership’s possible impact on the process.

Also of concern has been what she has presented.

When she was newsreading on WT programme-makers used a picture of Brighton Pavilion during coverage of the start of the hugely important Muslim month of Ramadan instead of a mosque, and the mistake was then featured in the Brighton Argus.

Mrs Owen had as well, tweeted over Christmas 2020 about how she had taken a trip to the beach at Southerndown in the Vale of Glamorgan, when others were governed by lockdown regulations. She treated us, too, to a video of how she had suffered a “turkey drama” (presumably at her South Wales home) by leaving plastic on the roast, but it cannot compare to the drama endured by the families to whom she broadcasted every night with the latest lockdown rules. She announced online, as she showed us what had happened: “I left a bit of the plastic on it…”

In the past, Mrs Owen has also described as a ‘crisis’ wearing odd shoes into the office to broadcast the lunchtime bulletin, and asked whether anyone would notice. She even included for us a shocked face emoji after that comment, and following it Mrs Owen published on Twitter: “Crisis over!”.

Yet she could, perhaps, have focused on the BBC CW website saying the same day that coronavirus/Covid-19 was the biggest cause of death in Wales that month, which many might see as a real crisis. This was what she would have read instead of complaining about wearing odd shoes: “The mortality rate rose “significantly” for a second month, to 260 deaths per 100,000 people in Wales. It was also more than twice the rate in the most deprived areas compared with the least deprived area”.

Mrs Owen’s former lover, Mr Paterson, has been in the news, as well, for the wrong reasons. He posted a video on Facebook (FB) about how he went to the beach, too, over Christmas 2020 – this time at nearby Ogmore, which he said was “Balmy”. But the Welsh Government (WG) rules at the time appeared clear enough: “If you are travelling away from home, you should travel to meet your Christmas bubble and return home in the course of 25 December...You should keep taking steps to reduce the spread of the virus, and this will help ensure that you enjoy Christmas Day as safely as possible.” Travel advice from South Wales Police (SWP) warned people then about going to beaches “you shouldn’t be driving to these places”.

The memories of Phil’s astonishing 38-year award-winning career in journalism, when news wasn’t dumbed-down, as he was gripped by the rare neurological condition Hereditary Spastic Paraplegia (HSP), have been released in a major book ‘A GOOD STORY’. Order the book now!

Tomorrow – more disturbing facts divulged about the building where Mrs Owen works, as a virtual online ‘tour’ is condemned by staff, with one saying it is “Stalinist”, and another who worked for many years at the corporation declaring that it was a symbol of elitism.