After 23 years with the BBC, and 38 years in journalism (when he was trained to use clear and simple language, avoiding jargon), our Editor Phil Parry knows better than most that for an investigative journalist like him, relying on the Freedom of Information Act (FOIA) almost NEVER works!

People seem to view it as the answer to everything, but it isn’t.

For any investigative journalist (like me) The Freedom of Information Act 2000 is an almost useless gimmick, as attempts are made to disclose to the public important facts.

It was put on the statute book to fulfil a campaign promise from the UK Labour Government, and it is a pale imitation of the version in the USA.

There are actually TWENTY THREE official exemptions, which organisations can use to avoid giving crucial details.

On many occasions I have been called “vexatious”, when giving vital truths has been formally denied, but this week I came across ones that were new to me.

The ironically-named ‘Disclosure Unit’ of controversial South Wales Police (SWP) have refused to give details of a huge alleged bribery investigation in which contentious Swansea University (SU) was at the heart.

It followed creation of the £200 million (much of it public money) ‘Llanelli Wellness and Life Science Village’ (Delta Lakes) project, rebranded as ‘Pentre Awel – Breezy/Windy Village’, and it formed part of the £1.3 billion Swansea Bay City Region Deal (SBCRD), which was run in partnership with SU as well as Hywel Dda and Abertawe Bro Morgannwg health boards. 86 acres of land at Delta Lakes had planning permission, and the giant venture was to have included research, with business development facilities, a state-of-the-art care home as well as an assisted living and rehabilitation centre, outdoor leisure space, a wellness hotel, and a new leisure centre.

But a statement about it from SU declared: “The police have confirmed to Swansea University that there was evidence of potential criminal offending identified and secured against individuals and companies subject to their enquiry…The university’s decision to dismiss (a key official) was based on serious breaches of Swansea University procedures and was never dependent on a criminal investigation by the police or decision to prosecute by the CPS (Crown Prosecution Service)“.

During the police inquiry, properties in Swansea, Carmarthenshire and Kent were searched. SWP said the Regional Organised Crime Unit (Tarian) executed “a number of warrants as part of an investigation into alleged bribery offences. Seven (then eight) addresses in Swansea, Carmarthenshire, and Kent are being searched with the assistance of colleagues”. The searches involved officers from SWP, Dyfed Powys Police and Kent Police forces, yet The Eye were alone in disclosing the properties raided by the police.

The SWP’s, so-called ‘Disclosure Unit’, though, seemed LESS willing to give this kind of information, through an FOIA.

It said to us: “Your request has been considered and we are not obliged to supply…information. 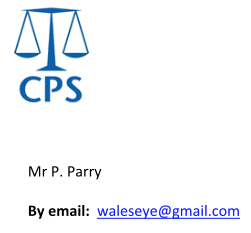 There was no luck either in getting information on this scandal from the Crown Prosecution Service (CPS), to which the police report about it was sent.

However these organisations are not alone.

ANOTHER university (this time in England) has a special section of its policy given online, which is headlined ‘EXEMPTIONS’.

It proclaims: “There are 23 exemptions under the Freedom of Information Act 2000, that may mean we are not able to disclose the information.

“There are two types of Exemption: Absolute, and Non-Absolute.

“Non-Absolute Exemptions require a Public Interest Test. This is where we must decide whether it is in the public interest to disclose the sensitive information or to withhold it.”

The document (which WASN’T secured using an FOIA!) continues: “You can refuse an entire request under the following circumstances:

“There is also an exemption for personal data if releasing it would be contrary to the UK General Data Protection Regulation (the UK GDPR) or the Data Protection Act 2018 (the DPA2018).

I would argue that it is ALWAYS in the public interest to hear details about a police alleged bribery investigation involving millions of pounds of public money.

The memories of Phil’s astonishing, decades long award-winning career in journalism (which was pursued DESPITE refusals under the FOIA) as he was gripped by the rare neurological disease Hereditary Spastic Paraplegia (HSP), have been released in a major book ‘A GOOD STORY’. Order it now!