A bank holiday reflection by our Editor Phil Parry on his 23 years at BBC Cymru Wales (BBC CW) after the man in charge publicly stressed the importance of local broadcasting, despite the fact that his own nightly television news service made a terrible error by mistaking Brighton Pavilion for a mosque, and his radio station has secured record-breaking low audience figures.

It always intrigues me how those overseeing problems can divert the public’s gaze from them by referring to other issues.

They are often issues which may, outwardly, seem to be connected, and the executive might then APPEAR to be completely open, but closer inspection tells a very different story.

Perhaps it’s a technique you learn.

The controversial Director of BBC Cymru Wales (BBC CW) and Director of Regions Rhodri Talfan Davies has proclaimed the importance of local services, saying: “… in the depths of Covid our regional and local services have been a source of news and companionship and support for millions of people”, yet he could, perhaps, have concentrated rather more on his own organisation.

Mr Davies speech at the ‘Westminster Media Forum’ was about BBC’s plan for its ‘biggest transformation in decades’. 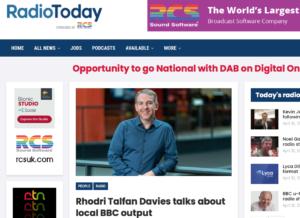 He emphasised the importance of local radio, saying how ‘up to’ six peak time local services will launch. He also underlined the crucial role of the local radio ‘Make a Difference’ campaign and the vital nature of local news.

Mr Davies declared: “Right now, the BBC’s 6.30pm regional news on BBC One is the biggest show on most weeknights in Britain with more than six million viewers across the UK tuning in”.

He added: “The simple truth is that our local and regional services have never mattered more to audiences. Millions of people each day turn to our local output for information they can trust about the communities they love.

“…We’ll be launching up to six new peak-time BBC local radio services in communities where we know we need to do more – including Bradford, Sunderland and Wolverhampton. And we’ll provide on-demand bulletins on BBC Sounds that are tailored to where you live.

“On TV, we want to build on the remarkable performance of our 6.30pm shows in recent months so, we’ll be launching BBC One HD across all English regions by the end of next year…If we ever needed a reminder about what’s at stake, and the enduring value of regional and local media across the UK, the thousands of calls to BBC local radio each day tell their own story”.

But maybe people need to be reminded of Mr Davies’ own record.

The Eye have been alone in showing that his executive, the editor of BBC Radio Wales (RW) Colin Paterson was having an affair with one of his presenters, Lucy Owen, who fronted BBC Wales Today (WT) when programme-makers mistook Brighton Pavilion for a mosque.

But controversies like these are not the only issues which need to be addressed by Mr Davies.

For many staff at BBC CW, Mr Paterson and Mrs Owen’s relationship represented a huge potential conflict of interest because Mr Davies’ officials had commissioned a RW programme hosted by her, called ‘Sunday morning with Lucy Owen’, and media executives both inside as well as outside the corporation have told me that they were worried about their partnership’s possible impact on the process.

The work performance of Mr Davies’ senior executive, Mr Paterson, at RW, has also been open to question, as the DS contributors have alluded to. A recent RAJAR report on listening figures, made grim reading for them both, coming as it did hard on the heels of other low audience statistics.

Mr Flynn was equally unimpressed by The Eye’s revelation of Mr Paterson’s affair with the married Mrs Owen. He told us: “If Paterson has been having an affair with a Wales Today and Radio Wales presenter it brings his management skills in to question and he needs to be suspended immediately”.

But it hasn’t simply been problems at RW which The Eye have brought into the open. Issues too have emerged at Mr Davies’ flagship evening television news programme, and they cast a different light on his announcement that “the BBC’s 6.30pm regional news on BBC One is the biggest show on most weeknights in Britain”.

When his presenter, Mrs Owen, was newsreading on WT, programme-makers used a picture of Brighton Pavilion during coverage of the start of the hugely important Muslim month of Ramadan instead of a mosque, and the mistake was then featured in the Brighton Argus.

Mrs Owen had also tweeted over Christmas about how she had taken a trip to the beach at Southerndown in the Vale of Glamorgan, when others were governed by lockdown regulations.

Mrs Owen treated us, too, to a video of how she suffered a “turkey drama” (presumably at her South Wales home) by leaving plastic on the Christmas roast, but it cannot compare to the crisis endured by the families to whom she broadcasts every night with the latest lockdown rules. She announced online, as she showed us what had happened: “I left a bit of the plastic on it…”

In the past, she has also described as a ‘crisis’ wearing odd shoes into the office to broadcast the lunchtime bulletin, and asked whether anyone would notice. She even included for us a shocked face emoji after that comment, and following it Mrs Owen published on Twitter: “Crisis over!”.

Yet she could, perhaps, have focused on the BBC CW website saying the same day that coronavirus/Covid-19 was the biggest cause of death in Wales that month, which many might see as a real drama.

This was what she would have read instead of complaining about wearing odd shoes: “The mortality rate rose “significantly” for a second month, to 260 deaths per 100,000 people in Wales. It was also more than twice the rate in the most deprived areas compared with the least deprived area”.

Mr Davies’ appointee who she had an affair with, Mr Paterson, has also been in the news for the wrong reasons.  He posted a video on Facebook (FB) about how he too went to the beach over Christmas – this time at nearby Ogmore, which he said was “Balmy”. 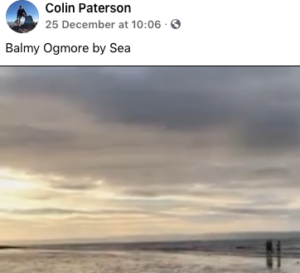 It is even more bizarre that his superior, Mr Davies, stressed the importance of local broadcasting, when his own nightly television news service mistook Brighton Pavilion for a mosque, and his radio station has secured record-breaking low audience figures.

But perhaps talking about the importance of those local services, is just a means of diverting attention away from the problems at your own station…

Tomorrow – Unsettling details of the giant American media corporation and its shareholder, behind Wales’ new ‘national’ newspaper are revealed by The Eye.

The memories of Phil’s remarkable decades-long award-winning career in journalism (including his years at The BBC) as he was gripped by the rare disabling neurological condition Hereditary Spastic Paraplegia (HSP), have been released in a major book ‘A GOOD STORY’ (which is very different to Mrs Owen’s own book ‘Boo-a-bog in the Park’). Order the book now! The picture doubles as a cut-and-paste poster!